Whisky Clubs Find Novel Ways to Taste Together Despite COVID-19

Social distancing is keeping millions of people safe from COVID-19, but it has put a stop to many activities, including whisky club meetings. Nevertheless, clubs are getting creative with virtual substitutes, finding ways to continue gathering around whisky even from a distance. “We did a virtual tour of the Balcones Distillery [on March 17], with members logging in from our chapters all over the world—from Mexico City to all across the U.S. to Beirut—where they helped us do two barrel picks,” Drammers Club president Charlie Prince tells Whisky Advocate. “We also did a group chat [on March 20], and we're going to do virtual tastings, where we mail samples in advance to members in the coming weeks with guest speakers from Balvenie, Port Askaig, Milk & Honey,” and more to come.

The barrel pick had been scheduled weeks before, with plans for Drammers members to attend in person. When the need for social distancing arose, Prince decided to carry on with the barrel pick solo, assisted by Balcones stillhouse manager Gabriel RiCharde and Texas state sales manager Alex Elrod, and opening it up to the club via Facebook Live. “Gabe and Alex led the discussion, walking me around the warehouse to the location of the actual barrels,” which they'd picked out previously with head distiller Jared Himstedt, Prince says. As he, RiCharde, and Elrod sampled whiskey straight from the barrel on a live video feed, “the three of us talked about what we were tasting, received questions from members about the barrels, and at the end, I picked two barrels with input from the members who were following along remotely,” Prince adds.

Women Who Whiskey has 30 chapters around the world; the Long Beach, California chapter held its first virtual happy hour on March 18 using the video conferencing service Zoom, and plans to make it a recurring twice-weekly event, every Wednesday and Friday, for the foreseeable future, according to chapter president Stacey Smith-Clark. The initial virtual gathering was “focused on meeting up and sharing what people [were] drinking right then, but participants have asked for an actual whisky tasting, and also a tour of my home bar, which is pretty expansive,” Smith-Clark says. 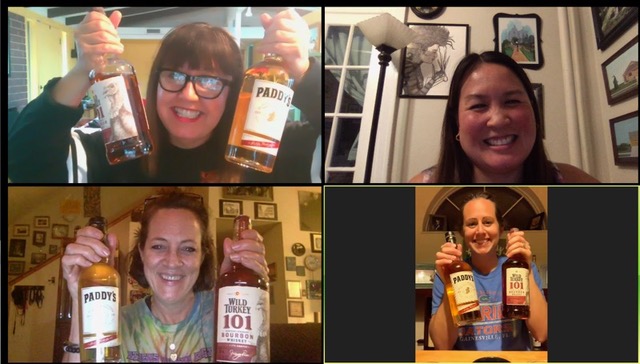 This week, the chapter has lined up a trio of solid, affordable, widely available whiskeys to taste together—Wild Turkey 101, Rittenhouse rye, and Paddy blended Irish whiskey. “I know a lot of people are having trouble finding supplies, and a lot of people aren't working right now,” Smith-Clark says, which is why she made a point of choosing whiskeys that are not only tasty, but easy on members' wallets. “But certainly, as we move forward, we can all try different ryes, or different bourbons, or scotches.” Looking ahead, each virtual happy hour will include an optional tasting component, but members are also welcome to simply check in and enjoy a whisky of their choice. “You can do whatever you want,” Smith-Clark adds. “Everybody is welcome to join, and everybody has been really open and respectful, and had a good time together.” Beyond group members, Smith-Clark says she's connected with several brand ambassadors—as well as bartenders from local bars with solid whisky lists, including the Hawk, Darling's, and the Blind Donkey—inviting them to join future virtual meetings and share expert insight on whisky and cocktails. “All have been very receptive, and willing to participate in any capacity,” she adds.

Meanwhile, Black Bourbon Society's thousands of whisky-loving members around the globe are “busier than ever,” founder and chief executive Samara Rivers says, noting, “We have amped up our digital and media content by adding daily live or prerecorded” content. On March 24, the society held a virtual March Bourbon Madness on Zoom. “We got through 16 rounds of educated discussion on which whiskey should progress to the Sweet 16,” Rivers says. “We also started a live webinar series called ‘Whiskey Weekly,'” which on March 25 featured an interview with Smooth Ambler CEO and master distiller John Little, and the previous week spotlighted Joe Louis Bourbon, named for the African American boxer who reigned as world heavyweight champion from 1937 until 1949. On a typical episode, “I take a moment to do a live whiskey review of the featured brand, and then lead our members through Q&A with the founder,” Rivers explains. 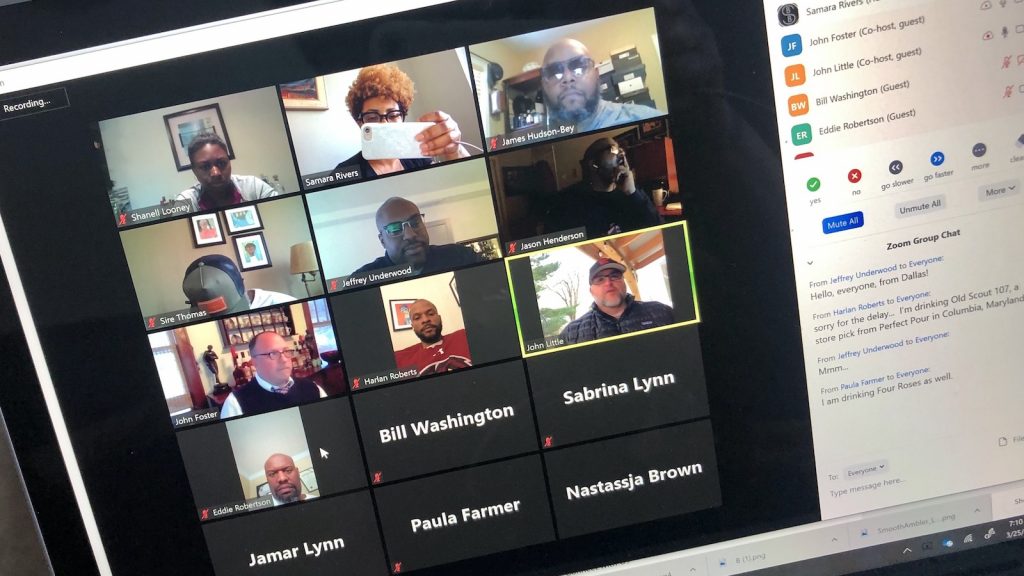 Black Bourbon Society has started hosting webinars, including a recent one with Smooth Ambler's John Little and John Foster, to keep its members engaged with the whisky world.

Additionally, Black Bourbon Society has begun live-recording its “Bonded in Bourbon” podcast; a “Mixology Mondays” segment focusing on whisky cocktails; and a happy hour at 6 p.m. EST on Fridays. “We stream everything through Zoom, and once the recording is finished, we publish it to our YouTube channel and to IGTV,” Rivers says. “It also gets reposted to our private Facebook page, so that our members who missed it can see it at a later time.” Keeping busy has paid off in a big way—by attracting new whisky fans to join the club. “We've seen a huge spike in interest, and have an average of 125 new members joining the private [Facebook] page a day,” Rivers says. “Currently we have well over 14,000, which is drastically different from” the group's membership last December, when it stood at around 10,000 people.

No Barriers to Connecting

For Rivers, the surge in participation has been a kind of silver lining amid very uncertain times. “My goal since all this started has been ‘keeping spirits high with spirits,'” she says. “We've had to cancel our local events,” and a group excursion to Louisville, Kentucky, scheduled for April, will probably also be canceled. “While I could wallow in the frustration of lost revenue and canceled trips, I decided to get creative with keeping our members together and engaged. The programing that we have created around this situation will now be permanent additions to our offerings as a society. I'm sort of kicking myself for not thinking of these ideas sooner, but they have become valuable during this time of crisis.”

Prince agrees that the global whisky community's resilience has given him reason for hope. And social distancing has, paradoxically, bolstered camaraderie. “We have chapters in cities all over the place, and it's always been a focus to connect them—not just taste whisky, but actually feel connected to other people who like whisky—in Oaxaca, and Berlin, and Warsaw,” he says. “Everyone's stuck at home, so it's a rare opportunity to get to know each other. It shows that whisky is universal. There aren't necessarily a ton of things we can all connect on, but this is one thing—people can appreciate good whisky in most places around the world, so there's not a lot of barriers to connecting people now. That part's nice.”
Whisky Life News zkostro Whisky Clubs COVID-19