A whisky lover's cure for the common cold, the seemingly basic Hot Toddy has an ambiguous history.

The word “toddy” may come from the Hindi word “tārī,” a drink made from fermented palm tree sap. Legend has it that the British discovered the drink during colonial trade days and brought it back to the motherland—although the contents of the beverage surely changed with the lack of palm tree liquor, no doubt substituting whatever spirits were locally available. The first recorded use of the word toddy to mean a drink made with spirits, hot water, sugar, and spices was in 1750 in the Boston Weekly Post Boy.

Toddy variations abounded in the 18th and 19th centuries, using not only whisky but rum, brandy, gin, and apple brandy. Wherever you were, if you had access to spirits, water, and sugar, you could make a Toddy (hot or cold—though the cold variation is also known as a Sling). During a time when actual medical treatments for a cold or other winter illness were few and far between, the soothing warmth of a Toddy was seen as an acceptable remedy.

Eventually, the Toddy came to be known most often as a whisky cocktail, served hot. The Hot Scotch Toddy recipe published in the 1910 Jack's Manual called for dissolving a teaspoon of sugar in hot water, adding scotch, and stirring, then grating nutmeg on top. The formula of base spirit, hot water, sweetener, and spices makes the Hot Toddy an easy cocktail to master and also allows for experimentation.

“Hot Toddies are simple to make, and most people have all the ingredients at home,” says Christopher McAllister, assistant clubhouse manager at The Harmonie Club in New York City. “It's the perfect beverage to sip on in colder months and provides a great foundation for inventive cocktails in the warmer months. The possibilities are endlessly delicious.”

So the next time you want to warm up or perhaps try to remedy a cold, grab a mug and your favorite whisky, and see what a Hot Toddy can do for you.

Scotch, Irish, bourbon, rye...pretty much anything goes in a Hot Toddy.

“This formula is great with just about any whisky, be it scotch, American, Canadian—even brandy works,” says Abigail Gullo, assistant general manager and bar manager at Ben Paris, The State Hotel in Seattle. But she likes Irish whiskey best. “It reminds me of the Toddy my Irish gran would make for me when I had the sniffles.”

Gullo prefers blends, like Powers or Tullamore D.E.W. “Blended Irish whiskey is typically made from barley, malted barley, and corn, and the combination of those three flavors is sweet, green golden honey,” Gullo says, adding that honey is a natural choice to sweeten the drink.

McAllister likes to use wheated bourbon such as Maker's Mark. “All the sweetness from its mashbill gets highlighted in a Hot Toddy,” he says. If you like scotch, be sure to choose something that's no more than lightly smoky; anything heavily peated will overpower the other flavors. 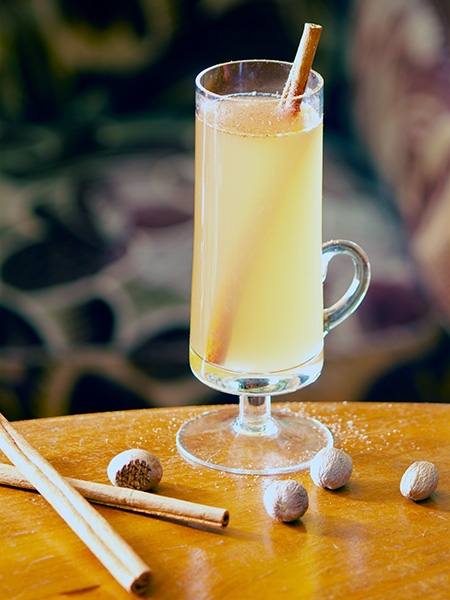 The Hot Toddy is the most flexible whisky cocktail, made with literally any type of whisky you please.

Fill a mug with boiling hot water and let sit for at least 1 minute. Toss out the water. Add whisky, honey, and lemon juice, and stir to combine. Top with boiling water and stir well. Garnish with fresh grated spices to taste.

To ensure the heat stays in your drink, rather than leeching into your mug and leaving you with cold Toddy, pre-fill the mug with boiled water for at least a minute, and then discard it before building the cocktail.

Use a double boiler

If you have the time, Gullo recommends letting the whisky, sweetener, spices, and any other ingredients “commingle in a sauna before hot water is added.” Translation: Put them in a double boiler for about five minutes to come up to temperature gently.

“When I'm in a hurry to warm up, a touch of nutmeg and a little ginger goes a long way,” McAllister says. Cinnamon is also a great choice, as is any baking spice you enjoy. Sprinkle or grate some on top before serving.