Droves of dedicated whisky fans descended upon the Hyatt Regency in Chicago on November 5, for a night filled with top-flight drams and great times. Over 250 whiskies were poured, and seminars were presented by Heaven Hill and Chicago's own FEW Spirits. 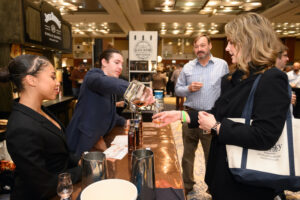 For Geoff Raye, who has now attended WhiskyFest for eight straight years, the first hour of the event is a can't-miss. “VIP hour is mandatory for me at this point,” he said. “I got to try Glendalough 25, and Johnnie Walker Blue Label Ghost & Rare.” Attendee John Aberman was thrilled with the VIP selection at Kentucky Peerless. “It's really hard for me to find Peerless, let alone any of their more limited releases, so the Absinthe Finished rye is a special treat, and really off the beaten path,” he said.

After the VIP hour came to a close, hundreds more devoted whisky lovers streamed in, and they had their pick aplenty. American whiskeys from across the country were represented, including Oregon's Westward Whiskey, California-based St. George Spirits, Indiana's Hard Truth Distilling, and Balcones from Texas. Balcones enjoyed the opportunity to connect with fans of the brand and newcomers to Texas whiskey alike. “I've been fielding questions from consumers about mashbill and grain, as well as questions about the distillery, and it's great to see all the excitement people have not just for us but for whiskey in general,” said Balcones single barrel program manager Alexander Elrod. The American delegation was complemented by such international names as Paul John from India, Hatozaki from Japan, and plenty of distilleries from Ireland—Bushmills, Powers, Dingle, and more—and from Scotland, Johnnie Walker, Benriach, Edradour, and Glen Moray to name a few. 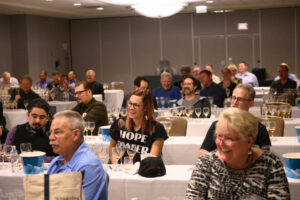 While tasting was certainly the main event, seminars also enhanced the evening. FEW Spirits founder and master distiller Paul Hletko led a talk on what's guided FEW to success in the decade since it opened its doors, and gave people the chance to taste through seven different whiskeys, including a newly launched bottled in bond bourbon. From Heaven Hill, national brand ambassador Bernie Lubbers spoke about the resurgence of American rye as attendees tasted through a variety of ryes within the Heaven Hill range.

WhiskyFest returns to New York City on November 11th at the Marriot Marquis. The final WhiskyFest of the year will be held in San Francisco on December 3. Order your tickets here.
jhiggins WhiskyFest