Smoky Whiskey Is the Most Exciting Trend at American Distilleries Today

In the blazing dry heat of the Sonoran Desert, a 600-degree fire burns in a custom-made steel furnace, unfurling plumes of white smoke laced with the smell of burning mesquite. It's malting day at Hamilton Distillers in Tucson, Arizona. Mesquite smoke is pumped from the furnace into a germination and malting kiln, where it runs through moist barley, imbuing the grain with a smoky, lip-smacking barbecue character. It's nearly the same process used for making smoky single malt scotch, except Hamilton makes mesquite-smoked single malt whiskey and it's happening not on a cool and misty Scottish island, but in the high desert in one of the hottest parts of the United States.

How Whisky Got Its Smoke

Scotch whisky has been synonymous with smoky flavors for centuries, and Scottish distillers started down this path more of necessity than intention. In order to malt barley for distilling it must be encouraged to germinate, then have the growth stopped by drying the damp grain with hot air. Early Scottish distillers created hot air using fires fueled with peat because it was a cheap and available fuel source in a region where wood was scarce. The barley attained distinctive smoky notes as a result. In modern times, it became possible to malt barley with no smoke contact whatsoever, and peat's main role is now as a flavoring agent. Of course, peat is hardly the only aromatic and flammable substance around.

Experience American Smoke With These Whiskies

Smoking malt for whiskey with wood is a product of the craft whiskey movement's constant quest for original flavors. However, it borrows from a very long and established American tradition: barbecue. “Whiskey and barbecue have an incredible affinity because they share one key ingredient together, and that is wood,” says barbecue expert Steven Raichlen, the host of Project Smoke and Project Fire on PBS and author of books of the same names. Across the country, distillers are further developing that connection by smoking their grain with regional hardwoods and exploring the flavors and textures that these woods provide. Virginia-based Copper Fox Distillery, an early pioneer, uses apple and cherrywood smoke for its Wasmund's single malt, but peachwood for its Copper Fox single malt. Little Rock, Arkansas-based Rock Town Distillery makes a whiskey from hickory-smoked red winter wheat. Sonoma Distilling Company's Cherrywood rye includes a small amount of cherrywood-smoked barley. 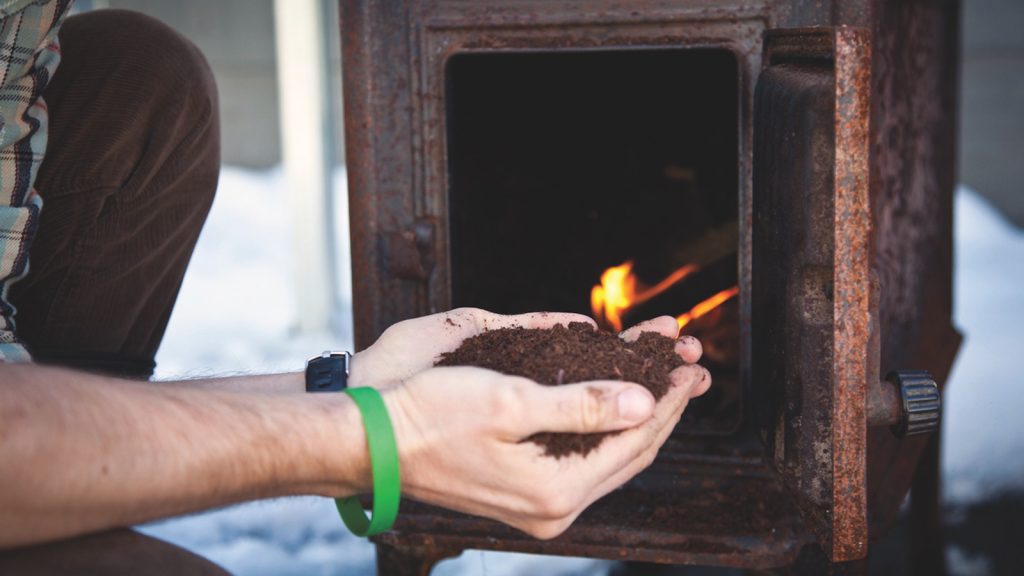 Wood-smoked whiskey trailblazer Darek Bell—founder of Corsair Distilling in Nashville—has experimented for years with smoking grain using dozens of kinds of wood, inspired by his love of barbecue and his search for a distinctly Southern flavor. Many of his whiskeys are smoked with multiple types of wood, each contributing a unique flavor to the nose, palate, and finish. Bell has documented his efforts both in the book Fire Water: Experimental Smoked Whiskeys and with a wide array of whiskey releases, from the flagship Triple Smoke—smoked with cherrywood, beechwood, and peat—to the hickory-smoked Wildfire.

Wood-smoked whiskeys differ from the peat-smoked variety, opening the door to whisky lovers who may not enjoy peat reek—the maritime, seaweed, and iodine notes common in peated scotch. Wood-smoked whiskeys emphasize fruity and meaty flavors. As with barbecue, whiskey can be smoked with many different kinds of wood, but the differences between them are relatively subtle. “It may sound a bit heretical, but there isn't a huge amount of difference [in barbecue] in the actual smoke flavor from one wood to another,” Raichlen says. “There's a subtle difference, but it's not like if you smoke with cherrywood you're going to taste cherries.” This is true of wood-smoked whiskeys as well. Flavors derived from different woods are noticeable, but subtle—cherrywood and applewood-smoked whiskeys tend to be noticeably lighter than hickory. However, beyond the species of wood, it's the method and duration of the smoking process that ultimately shape the intensity and flavor of the smoke.

Most distillers choose the wood they use based on their location, just like using local grains and water. “The traditional [barbecue] wood combinations are dictated almost solely by geography,” Raichlen says. “They use alder to smoke salmon in the Northwest because alder is their prevalent tree. They use hickory in the South to smoke pork because hickory is the predominant wood.” The same can be true for whiskey. As the diversity of American whiskey expands, new offerings will increasingly reflect their place of origin.

There is one wood that stands apart from the crowd: mesquite, whose smoke carries a distinctive and unmistakable barbecue meatiness. “It's the smokiest of the woods, and if you think of the essence of barbecue as being smoke, anything that you would call the smokiest will remind you the most of barbecue,” Raichlen says. “Mesquite has a much stronger, oilier, and more bitter flavor than other woods.” Thus it's no coincidence that, of all the styles of wood-smoked whiskeys, mesquite is the first to emerge as a style in its own right, with complexity comparable to peat-smoked scotch but across an entirely different palette of flavors.

Stephen Paul, who founded Hamilton Distillers with his daughter Amanda, knows a lot about mesquite. For decades, he made luxury furniture out of the knotty, grainy, uncompromising wood. But while drinking scotch at a family barbecue fueled by leftover mesquite wood, Stephen's wife Elaine proposed that barley might be malted with mesquite, instead of peat. That spark of genius became the basis for Hamilton Distillers and its flagship Whiskey Del Bac Dorado. All the grain is malted in-house using locally harvested mesquite wood. “The people who go out and cut it tend to be kind of oddball dreamers too,” Stephen says. “Mesquite has this romantic notion around it. It's super wild, and a very difficult wood to deal with at every stage.”

Just as peated Islay whiskies offer a breadth of styles and smoky intensities, mesquite whiskey is starting to show off its own flavor range. Colin Keegan, an Englishman who lives in an apple orchard in the foothills of the Sangre de Cristo Mountains of New Mexico, was likely the first distiller to make mesquite whiskey in any quantity, pioneering the style with Colkegan whiskey. When he opened Santa Fe Spirits, Keegan wanted to make a whiskey that would resemble scotch while also reflecting New Mexico. So he worked with malted barley, scotch's hallmark grain, but added some American influence by smoking it with mesquite wood. “We realized just how iconic mesquite smoking is to America,” Keegan says. Colkegan is aged for several years in full-size, 53-gallon barrels, most of them used—another nod to Scotch whisky. “After 3 years we can achieve a flavor profile that's more akin to an 8 year [scotch] because those higher volatiles just shoot out of the barrel,” Keegan says, referring to the release of undesirable flavor compounds. 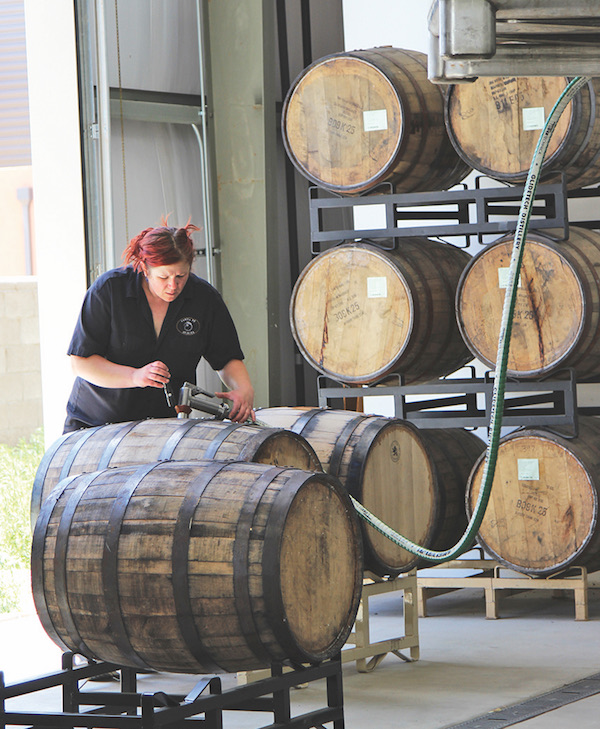 While mesquite smoke can be a dominant flavor, Colkegan and Whiskey Del Bac are very different whiskeys. Whiskey Del Bac's smoked whiskeys are rich, meaty, spicy, and filled with a dry heat, while Colkegan is fruity, elegant, and refined, with a maltier backbone. Other distillers, like Ranger Creek in Texas, are also experimenting with mesquite-smoked whiskey and developing their own arsenal of flavors. Even spirits giant Diageo has latched onto America's fondness for mesquite with Crown Royal Texas Mesquite, a Canadian whisky with mesquite flavoring. Mesquite-smoked whiskeys, rooted in the Southwest and aged in the region's very hot and arid climate, may one day be as emblematic of the American Southwest as peated whisky is for Scotland's Islay.

A few daring distillers are taking on the Scots at what they do best: making peated whiskey.

American craft distillers who want to make peated whiskey generally import the same Scottish malt used by the large Scotch whisky distillers. They define their style by their methods of fermentation, distillation, and maturation. So three different whiskeys, like McCarthy's from Clear Creek Distillery in Oregon, Westland Peated from Seattle-based Westland Distillery, and the new Balcones Peated from Balcones Distilling in Texas are clearly distinct from each other, even though all of them are made using Scottish peated malt.

Of course, any whiskey made with Scottish peat will always owe something to Scotland, so some American distillers are starting to distance themselves by procuring authentic American peat. Only recently have independent malt houses that can smoke and malt barley on a small scale appeared in the U.S., enabling the use of home-grown American peat.

The allure of American peat is that not all peat tastes the same. Peat is a natural product, created by decaying plant matter, and the composition of those plants varies from place to place. That's why Islay peat—predominantly decayed moss and seaweed—can taste quite different from Highlands peat, which has more terrestrial plant matter.

The composition of North American peat, which is found across the continent, can be even more varied, and craft distillers are just beginning to explore its many flavors. In addition to its Scottish malted release, Westland is currently maturing whiskey smoked with peat harvested from a Washington bog rife with plants you'd never find in Scotland, like crabapples, wild cranberries, and Labrador tea. Skagit Valley Malting, an independent Washington State malt house, worked closely with Westland to develop a peat smoking and malting process. “The raw material that we receive looks like the peat moss you'd get at the garden store, but a little coarser,” says Skagit CEO Dave Green. “It's not real exciting at that point. It smells like dirt. But once we heat it and create that smoke, then that great aroma really starts to come out.”

Upon its release in 2020, whiskey lovers will have their first taste of how these botanicals express themselves in the peat. “It's not nearly as medicinal as Islay-style peat,” promises Westland master distiller Matt Hofmann. “It's got a nice, almost barbecue spiciness to it,” he says. “We're trying to make something that is very expressive of the Pacific Northwest, and if the peat is different, that's a good thing.”

Above all else, American distillers are developing new flavors that are making smoked whiskey far more diverse than peated scotch alone.

In Portland, Maine, Luke Davidson, founder of Maine Craft Distilling, is crafting a uniquely Maine whiskey in his state's Scotland-like climate. His Fifty Stone whiskey is made from Maine-grown barley that's floor malted and smoked in-house with both Maine-sourced peat and seaweed. The peat comes from a fourth-generation traditional Maine peat farm that once sold hand-harvested peat used to heat people's homes—a common practice in 19th century Scotland and Maine alike. Davidson harvests the seaweed himself, hauling it in his boat before drying it in the distillery throughout the season. “We start the fire with oak and then we throw in the peat, which almost puts the fire out,” says Davidson. “It smolders, and then we throw the seaweed in and it instantly lights back up like paper.” The seaweed adds a unique iodine and brine note, a “burnt hospital” flavor that Davidson likens to a lighter version of Laphroaig, a classic Islay malt.

American peat presents two challenges for distillers: most peat lies in protected land, so finding a reliable source isn't always easy. Then, once the peat is procured, very few U.S. maltsters are equipped to use it to smoke barley. But the infrastructure for making American peated whiskey is slowly starting to develop, promising a not-too-distant future when we can smell and taste the smoke of the land itself in our whiskey.

There will never be one single style of American smoked whiskey. Some distillers will continue to adapt traditional Scottish methods for their own environments. Others are blazing entirely new trails or simply playing with smoked twists on classic styles, like peated bourbon and peated rye. For decades, whisky enthusiasts have asked the once-simple question, “Is this whisky smoked?” Now, with so many new styles to choose from, they may find themselves asking instead, “How was this whiskey smoked?”
Features Dispatches American Whiskey apolonski Fall 2018