Apple cider isn't just a delicious cocktail ingredient—it's great for some whiskey-infused baking too. Apple cider donuts (or muffins) dipped in luscious maple-bourbon glaze make a perfect seasonal treat, and are surprisingly simple to bake at home. In addition to the cider itself, spices such as cinnamon and nutmeg meld together to create a mouthwatering flavor profile that perfectly matches the whiskey topping.

Maple and bourbon have long been a perfect pairing—maple flavors are often found in bourbon, and many of the whiskey's other common notes, such as pecan and vanilla, seamlessly blend with the syrup as well. When combined with the apple and spice flavors of the donut, you get an end product that perfectly captures the taste of autumn and early winter. The bourbon flavor in this glaze is potent, so make sure to choose something you like—and since less than two tablespoons are needed, don't be afraid to reach for the good stuff. We tested this recipe with both Woodford Reserve Double Oaked bourbon and Basil Hayden's 10 year old bourbon, and both versions were delicious. 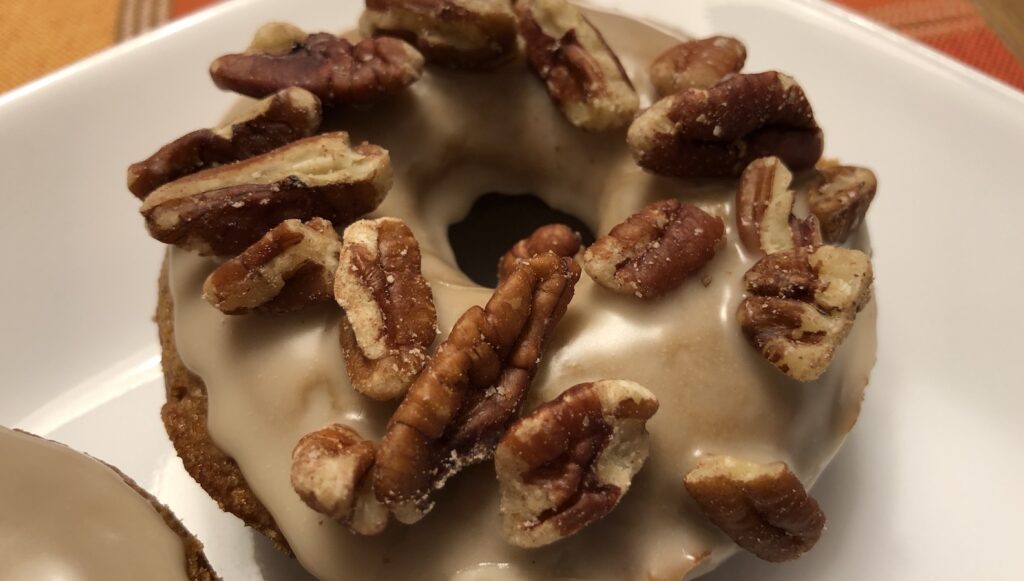 Topping the donuts with chopped pecans, or your favorite nut, adds texture and extra flavor.

The batter recipe comes from Sally's Baking Addiction, and it creates a dense, cakey donut to rival that of your local coffee shop. Our maple-bourbon glaze recipe is simple to whip up—no cooking required—but remember that since the glaze isn't cooked, the alcohol is still present. If you're baking a batch for anyone who can't imbibe, it would be best to leave out the bourbon and brush the donuts with melted butter instead, or even go with the cinnamon-sugar topping in Sally's recipe. No matter what, you'll end up with a bunch of donuts perfect for a holiday dessert or seasonal snacking!

Directions
Pour apple cider into a small saucepan and reduce over low heat, stirring occasionally, until you're left with roughly ½ cup—start checking after 10 minutes, then in 5-minute increments. Once it's reduced, remove from heat and set aside to cool for 10 minutes.

Preheat oven to 350°F. Spray a donut pan or muffin pan with nonstick spray and set aside.

In another large mixing bowl, whisk together melted butter, egg, brown sugar, granulated sugar, milk, and vanilla extract together. Pour the wet mixture into the dry ingredients and then add the cooled, reduced apple cider. Whisk everything together until smooth—these donuts are dense, so the batter will be thick. 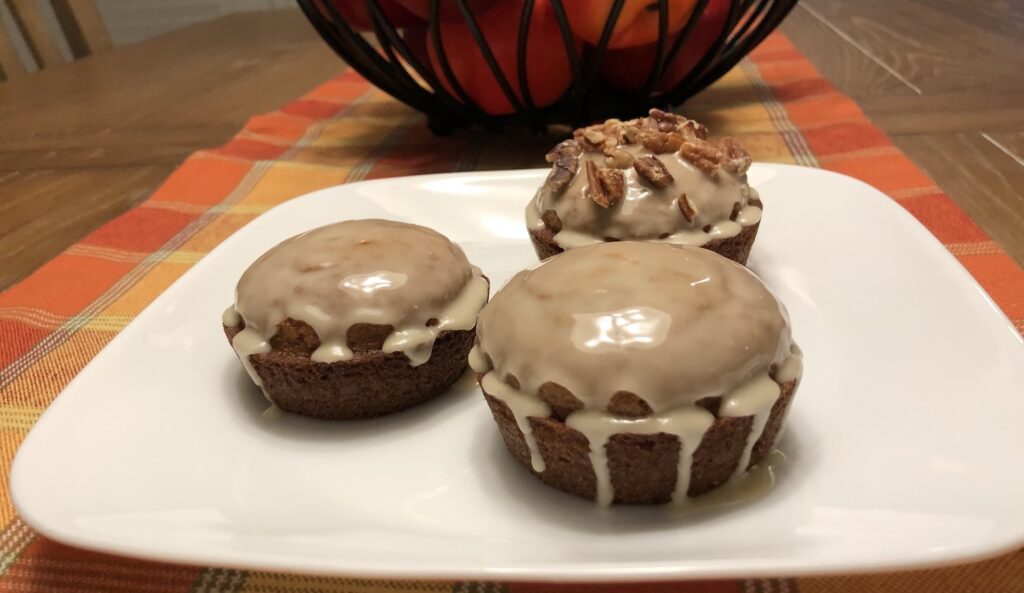 If you don't have a donut pan, this recipe can easily be used to make muffins instead.

Spoon the batter into the donut pan. Using two spoons is helpful; Sally's Baking Addiction recommends using a piping bag or large zip-top bag with a corner cut off to pipe the batter into the cavities. Fill each cavity about halfway; if you're using a muffin tin, go for about ¾ full.

Bake donuts for 10-11 minutes, or until the edges and tops have lightly browned. Poke the top of a donut with your finger: if it bounces back then it's done. Bake muffins 18-20 minutes or until a toothpick inserted into the center comes out clean. Cool donuts or muffins in the pan for 2 minutes and then transfer to a wire rack until cool enough to handle.

As donuts cool, whisk confectioners' sugar, maple syrup, bourbon, and milk in a medium mixing bowl until the mixture is smooth. Dip the tops of cooled donuts in the glaze. To add more flavor and texture, dip freshly glazed donuts into chopped pecans or other chopped nuts.

These donuts are best when served immediately but can also be stored well-covered at room temperature for two days, or in the refrigerator for five days.
sstone Whisky Life Food Bourbon Recipe