The majority of whisky barrels are mass-produced, utilitarian items—ready-to-wear in fashion parlance. But sometimes, you want to dress your whisky in something custom, much like a bespoke suit is made to the customer's exacting specifications, with particular finishing touches like a ticket pocket, turnback cuffs, or horn buttons. Distillers ordering bespoke casks are looking for the same sort of custom tailoring from their cooper, as they aim to make new discoveries, expand the boundaries of flavor, and turn heads. Rather than chasing fashion, bespoke casks can embellish a whisky with a style all its own.

Hip to be Square

There's something wonderfully spherical about the word ‘cooper.' Write it down and feel how all six letters require a curving, looping motion of the hand to form the letters. Like visual onomatopoeia, the word evokes the roundness of wooden casks. So when Swedish master cooper Johan Thorslund was challenged to build a square cask, he couldn't resist.

The challenge began with a friendly debate between Roger Melander, distillery manager at High Coast Distillery (formerly known as Box Distillery) in Sweden, and Jan Groth, former brand manager. The distillery's red brick building was once the location for the AB Box sawmill that built boxes from the timber floating down the Ångerman River, so Groth reasoned having whisky in a box-shaped barrel would be priceless. Melander protested, “No, a barrel has to be round.” Thorslund decided to intercede with a compromise, “We will make a box with round edges.”

Thorslund describes the square, 40-liter Swedish virgin oak cask crafted at his cooperage as “…a combination of two barrels. The corners are like barrels with a really narrow diameter, while the gentle angles of the sides are like a mash tun with a diameter of two meters,” he says, alternately pinching his fingers together then stretching his arms out wide.

Next, Thorslund had to address the issue of toasting and charring the interior. “[High Coast] Distillery is my most demanding customer,” he says. “If I offer them toasting levels, such as light, medium, or heavy, then Roger Melander will say ‘Johan, can you make me a medium plus?' Of course, I can make a medium plus. ‘Oh, but after the toasting, can you please char it, but while charring it with two-meter high flames, could you just wait for just a couple of extra seconds before turning out the fire?' We did, and that's the character.” Different areas of the square cask will play different roles in the maturation of the whisky, Thorslund explains. “Charring levels are deeper on the sides as they are closer to the fire than the corners. I hope it will give the whisky a special roundness,” he grins.

Oak casks are de rigueur for whisky maturation, but there is one country where the same rules do not apply. “The Irish Whiskey Act allows us to push the envelope in terms of wood; we don't just have to use oak,” explains Kevin O'Gorman, head of maturation at Irish Distillers Limited. The company owns Midleton Distillery, which produces Jameson, Redbreast, and Green Spot, among others. The Irish Whiskey Act (1980) states rather generically ‘the spirits shall have been matured in wooden casks.' The Midleton team began to look seriously at chestnut as an alternative to oak. 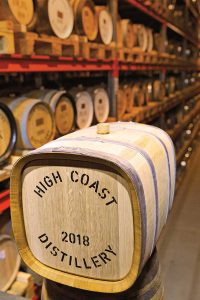 “Chestnut casks are made from sweet chestnut, Castanea sativa, sometimes called Spanish chestnut. It's like a first cousin to oak and beech, but it's part of the same Fagaceae family,” says O'Gorman. After trials with 2 to 4-liter miniature barrels, O'Gorman asked the Seguin Moreau cooperage in the Cognac region to build him seven medium-toasted chestnut casks from trees grown in the southeast of France. Chestnut is more porous and less dense than oak. The porosity of American oak is about 40-50 percent, while sweet chestnut is 65 percent. American oak has a density of 780-790 kg/m3, but typical sweet chestnut has a density of just 580-590 kg/m3. “Even handling the barrels, you can feel that they're much lighter,” reports O'Gorman, who noted that the coopers cut slightly thicker staves than they would with oak. “Sweet chestnut has a significant amount of tannins. Traditionally, it's an extremely durable wood used for fencing and housing. We found out recently that avalanche protection huts are made from chestnut because it's so durable.” In order to reduce free tannins, Seguin Moreau air-dried the chestnut wood for two years. “We found that it has much higher levels of vanillin and furfural,” says O'Gorman. “These tend to give more chocolaty, caramel, sweet notes, and these are significantly higher in chestnut than oak.”

The Method and Madness Single Pot Still whiskey used Midleton's medium-style pot still whiskey matured in bourbon and some sherry casks before an additional eleven to twelve-month period of maturation in the French chestnut casks. “The chestnut contributed lighter spices, red licorice, a confectionery sweetness with that wood character at the base,” says Billy Leighton, Irish Distillers head blender. “It's a real mouthful of sweet spices, cinnamon, and a little bit of clove.”

Bespoke cask whiskies are rarely mass market. They are often very limited, designed to appeal to discerning drinkers who eye the details the way a gentleman might admire a suit's pick stitching. At Glenmorangie, Dr. Bill Lumsden, director of distilling and whisky creation, experimented with different white oaks in the 1990s including chinkapin, swamp, burr, and truffle oak. For the Woodford Reserve Master's Collection releases, master distiller Chris Morris used a toasted maple wood finish to bring a balanced sweetness to his bourbon, returning to the innovation as part of the Four Wood Finish in 2013.

At the Hokkaido timber auctions, acquiring cooperage-grade mizunara oak ahead of the furniture makers is challenging enough for Japanese distillers, let alone American distillers. The wood is prized for its ability to impart incense-like aromas, but its expense is partly driven by its flaws. Notoriously, mizunara barrels leak like crazy. Coopers at Chichibu mitigate for the high porosity by sawing the wood at an angle; this may reduce leaks but becomes a wasteful and costly process in terms of the number of casks produced per tree. Used mizunara casks are now in demand as finishing vessels outside of Japan, and Bowmore, Chivas Regal, and Glendalough have all released whiskies using this technique.

After an exhaustive, nearly three-year search for mizunara oak, Keith Barnes, master distiller at Bainbridge Organic Distillers in Washington, secured his first delivery. Jay Gibbs, president of Gibbs Brothers Cooperage Co. in Arkansas, was given the challenge of constructing the casks. “We had to use every trick we know,” says Gibbs. “The first shipment was very dry and we had a lot of trouble with breakage. Mizunara oak is much less pliable than American white oak; we found it's more porous, almost brashy.” When the casks were complete, the coopers toasted them over a dry heat and finished them with a #3 char.

With the assistance of a Japanese wood broker, Barnes paid dearly for two subsequent parcels of mizunara at auction, while bidding against a major Japanese distiller. “This was the highest quality mizunara—no flaws—but every bit as leaky as the mizunara from previous batches. We prevailed, primarily because we wouldn't stop bidding,” says Barnes, with no regrets. Gibbs was encouraged too, because this oak had a higher moisture content and was easier to work with in the cooperage.

The Bainbridge Yama Single Grain Mizunara Cask achieved a score of 89 in the Whisky Advocate Buying Guide. “It smells of joss and temple wood, toasted marshmallow and citrus, with flavor notes of marzipan, fleshy tropical fruits, clementine and yuzu, toasted almond, allspice, and nutmeg,” says Barnes. After launching his first mizunara cask whiskey, Barnes had a hunch that securing future batches of wood would become impossible. That proved to be correct, as Barnes remarks wryly, “The only person happy about that was Jay Gibbs. He didn't think his crew could take making another batch of barrels with this difficult oak!”

Whisky typically gets its peat smoke flavor from malt that has been kiln dried over burning peat, but in Skibbereen, Ireland, West Cork Distillers has devised an innovative technique to impart the flavor of Irish peat via the barrel. “We use a bellowing technique developed through a collaboration with Pat Wholly, a local fifth-generation blacksmith,” says John O'Connell, one of the founders of West Cork Distillers. “I would be very sure that no one else in Ireland is using peat to char casks; in fact, I would be surprised if anyone else in the world is using this technology either.” The fuel is placed in a combustion chamber and set on fire. Air is bellowed up through the chamber to accelerate combustion, and virgin oak casks are levered down over the combustion vessel. O'Connell believes that coopers would have traditionally used solid fuels to char casks before natural gas became available, giving his method historical roots. “The combustion process is not a complete pyrolytic reaction, so it generates smoke,” he says. “The combination of smoke and flames char the virgin oak and impact on the flavor process.” 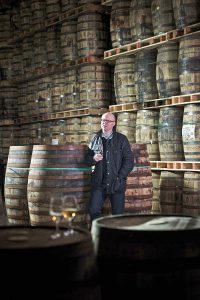 Kevin O'Gorman is head of maturation at Irish Distillers, which matures some of its whiskey in custom chestnut casks at Midleton Distillery.

West Cork uses the technique for both the Glengarriff Series Peat Charred Cask and the Bog Oak Charred Cask, which uses ancient wood recovered from deep within a bog for fuel. The whiskeys have the phenol equivalent value of around fifteen parts per million (ppm), comparable to the ppm of the liquid in anCnoc Flaughter, but the phenol profile is quite different than peated malt whiskies, registering lower levels of other compounds like guaiacol and eugenol. “The impact appears to be more pronounced on the nose than the taste of the whiskey,” notes O'Connell.“This might be due to the heavy Bodega cask maturation of the whiskey prior to the peat-charred cask finish.”

Oak casks add color and flavor to maturing whisky, while the charred inside surface also removes less desirable characteristics. Dr. Toshikazu Sugimoto, a scientist for Nikka Whisky, Japan, is pioneering a way of removing one of the major offending qualities of immature whisky before it even touches the barrel.

“Copper stills remove sulfur compounds, which contribute to a characteristic sulfury and meaty aroma [in new make spirit],” explains Sugimoto. “The compound called dimethyl disulfide or DMDS, can produce vegetable, rotten egg, gassy, or rubbery aromas. If their levels are high, then the odor can become unpleasant.” The vapor's contact with the copper reduces some, but not all of the less desirable sulfur compounds. The blackened surface of char inside a barrel finishes the job by removing immature characteristics like sulfur as the whisky ages, but this takes time. “It depends on the type of barrel and the warehouse environment, but it can take seven or eight years for the levels of DMDS to fall below the odor detection threshold,” says Sugimoto.

Other methods of removing DMDS, like the use of activated charcoal, reduced the levels of desirable esters and flavors as well. Sugimoto observed that in Japan, home-use fuel cell technologies are growing in popularity, and these fuel cells produce sulfur compounds, too. Fuel cells use a desulfurizer called silver zeolite: think of zeolite as a mineral that can hold onto and exchange other compounds, which you can pack into a filter like a catalytic converter on an automobile's tailpipe to stop the nasty stuff getting through.

“This is where fuel cell adsorption catalyst technology meets distilled spirits,” Sugimoto exclaims. He discovered that silver zeolite could selectively adsorb the unwanted DMDS without affecting other aroma compounds in the spirit. In cask trials, silver zeolite-filtered spirit maintained the tasty wood-derived characteristics in line with Nikka's expectations for an unfiltered spirit, while removing the unpleasant flavors derived from DMDS. This new technique could lead to faster maturation or a future where coopers can fine-tune the toasting and charring levels on casks waiting to be filled with silver zeolite-filtered spirit, designing bespoke vessels customized for maximum flavor development.
Features jmccormick Insights World Whisky Winter 2018