When Dale Degroff, renowned mixologist and author of The Craft of the Cocktail and The Essential Cocktail, first saw the Blood and Sand in old cocktail books, “it seemed like an awful, awful collection of ingredients. What a disaster,” he says. But so many respected cocktail books mentioned the drink that he decided to try it in the early 1990s. “It turned out to be excellent,” he says.

Drink historians believe a British bartender created the cocktail in the 1920s and named it after a 1922 movie about bullfighting called Blood and Sand. It may have been a marketing ploy to name the drink after the successful film, which starred Rudolph Valentino, in the hopes that adoring moviegoers would also latch onto the cocktail.

The recipe, first printed in the 1930 edition of The Savoy Cocktail Book, calls for equal parts orange juice, scotch, cherry brandy, and sweet vermouth, shaken well and strained. The formula appears very simple, yet can also easily lead to an unbalanced concoction, depending on such factors as the juice's acidity, the vermouth used, and the whisky's flavor profile. With such a simple drink, using high-quality ingredients is a must, as is paying close attention to proportions. Also important to note: nowadays, the Blood and Sand is almost always made with Cherry Heering liqueur, rather than cherry brandy, which helps to balance the sweetness.

When Degroff revitalized the Blood and Sand, he found it paired well with meat, especially game dishes like venison with cherry sauce. Nowadays, you can find the drink or variations of it in many recent cocktail books. “It has wide appeal because it's only four ingredients and it has a really nice, lovely crowd-pleaser of a flavor,” Degroff says. “I haven't found many people who don't like it.”

The Blood and Sand is a scotch drink. Degroff uses “middle of the road” blends such as Cutty Sark, Dewar's White Label, Johnnie Walker Red, and Famous Grouse. Anything too peaty will overpower the drink.

Abigail Gullo, bar manager at Ben Pari at The State Hotel in Seattle, also prefers blended scotch such as Compass Box Great King Street Glasgow Blend. Like most bartenders, she garnishes the drink with a flamed orange disk—a process that sounds intimidating, but is quite easy to pull off. 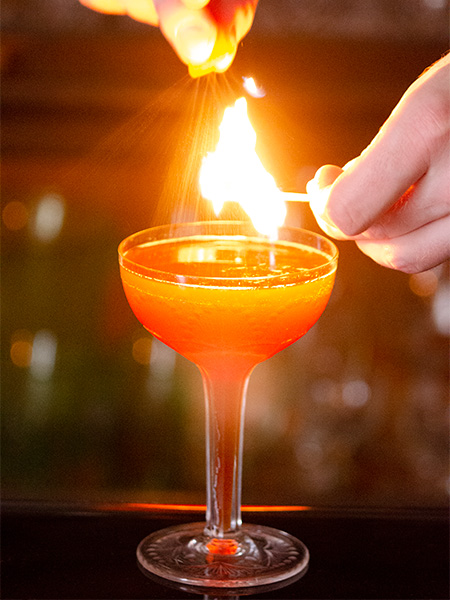 Flaming an orange peel might seem intimidating, but it will take your cocktail to the next level.

Shake all ingredients hard with ice and strain into a cocktail glass.

To flame the orange disk, follow these steps from Gullo: Cut a round piece of orange peel that's about ½-inch to 1-inch wide. Light a match and hold it several inches above the cocktail. Hold the orange peel colored side down and about two inches above the match. Wave the peel slowly over the match for a couple of seconds to help warm the oil so it lights more easily. Twist and squeeze the peel over the lit match, then blow out the match. Rub the peel around the rim of the glass. Drop the disk into the drink or discard.

Only use Cherry Heering
This Danish cherry liqueur is a must to achieve the right balance. “Don't make a Blood and Sand if you can't get it,” Degroff says. Cherry brandy is not a substitute, as many brands are low quality, too sweet, and artificially flavored.

Shake hard
Put some muscle into it and get a good froth on the drink to incorporate the ingredients well. A 30-second shake should do it.

Squeeze and strain fresh OJ
Fresh juice always tastes best, but be sure you strain it. “This drink can already get a little too chunky—keep that pulp out,” Gullo says.

Don't forget the garnish
It can take some practice to master the flamed orange disk, but it's not only for show. “It also puts a wonderful aroma of orange in the air and a wonderful flavor of orange on top of the drink,” Degroff says.