An Irish Journey: Brian Nation On The Move To America

Brian Nation was supposed to be an expat by now. The former master distiller for some of Ireland's most famous whiskeys—from bestsellers like Jameson to rarified releases like Midleton—left his job last year at Irish Distillers to take on the master distiller role at a small Minnesota craft venture called O'Shaughnessy Distilling Co. His plan, before COVID struck, was to decamp from the Emerald Isle last summer and settle in Minneapolis, where he could be on-site as construction finished at the distillery.

Nation's new plan is now established—or as established as it can be during a pandemic. He and his family will make the move in July to arrive before two important milestones: O'Shaughnessy's first distilling day, currently set for August, and his children starting a new school year in a new country. “The adventure of building a brand from the ground up and being involved in the building of a new distillery really did excite me,” he says. “The kids see it as an adventure, and my wife sees it as an adventure.”

While the pandemic has complicated things, the distillery has plugged along through the last year with Nation visiting at times. The big picture for O'Shaughnessy remains unchanged, and at full capacity the distillery will be able to produce up to 600,000 liters of alcohol or, roughly, 4,300 barrels annually. 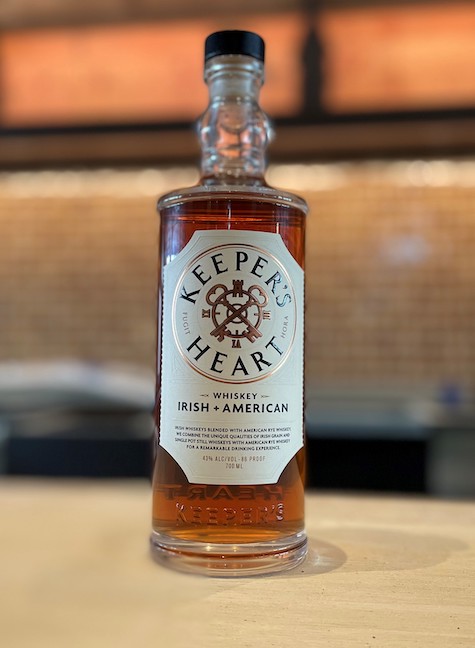 Keeper's Heart will be a blend of sourced Irish grain and pot still whiskeys and American rye.

Nation is currently finalizing the recipe for the distillery's inaugural release, to be called Keeper's Heart. The whiskey is a blend of sourced Irish grain and pot still whiskeys and American rye, and will be bottled at 43% ABV. “I've spent the last number of months doing different blending exercises and developing prototypes for the team to taste and understand,” Nation says. “You've got the lovely floral contribution from the grain whiskey, coupled with the spicy characteristics and fruits from the traditional Irish pot still whiskey. Then you've got the additional spice and vibrant fruit from the rye.” For now, Nation declines to reveal where O'Shaughnessy has sourced the Irish and American whiskeys, but he promises greater transparency in the future.

Although O'Shaughnessy will kick things off with this sourced release, Nation's first American whiskeys will represent a cultural marriage between his homeland and the New World.

“We're going to make American whiskey with an Irish style, starting off with a mashbill of malted barley and unmalted barley, and triple distilling that in copper pot stills,” Nation says. “Then we'll do an American twist on that, by maturing it in virgin American oak casks. We'll bring that stronger wood characteristic to the single pot still whiskey, and really showcase a different flavor and style.”

Looking ahead, Nation also plans to experiment with different mashbills, and potentially even different strains of yeast, to produce a library of unique whiskeys.