If you missed our big announcement on Monday, check it out: We're bidding a grateful farewell to executive editor Jeffery Lindenmuth and welcoming in his place David Fleming, a longtime member of theWhisky Advocate blind tasting panel and experienced whisky writer. This doesn't mean any big changes are coming toWhisky Advocate; we'll still be bringing you the latest news, insights, reviews, and other whisky content in print and online.

Speaking of latest news, on to the week's new releases. First up, The Last Drop has unveiled its second bourbon release, a whiskey distilled in 1980 at what is now Buffalo Trace Distillery. There are 240 bottles of the 20 year old bourbon available, with a recommended price of $4,600.

Islay's Bruichladdich is rolling out the latest edition of Black Art, distilled in 1994. The single malt scotch is priced at $450, with 12,000 bottles available.

Bob Dylan-backed Heaven's Door is adding its second release in the Bootleg Series, a 15 year old Tennessee whiskey finished in Jamaican rum casks. The whiskey is priced at $500, with 3,000 bottles available.

Independent bottler Gordon & MacPhail is releasing a rare single malt from the demolished Glenury Royal Distillery. Just 397 bottles of the whisky are available, priced at $2,500.

Walsh Whiskey's The Irishman is expanding the Founder's Reserve blend with a higher-ABV oloroso sherry-finished version, priced at $100. There are 8,000 bottles of the whiskey available.

Barrell Craft Spirits is rolling out Batch 026 of its bourbon. The whiskey is priced at $90 and available in limited amounts.

Proof and Wood Ventures is launching two straight whiskeys in honor of the presidential election: a 4 year old bourbon ($60) and an 8 year old rye ($115). Both are bottled as single barrels in limited amounts.

A new Irish blend called Proclamation is launching in the U.S. The whiskey is priced at $30 and widely available in Connecticut and online.

Firestone & Robertson Distilling Co. is launching two cask-finished versions of its TX bourbon: one in tawny port casks, the other in PX sherry casks. Both are available in Texas and priced at $65.

San Jose, California's 10th Street Distillery is releasing its first blend, California Coast. The $40 whiskey is for sale in California.

Finally, Spirit Hound Distillers in Lyons, Colorado is debuting its first bourbon. The 3 year old whiskey is available at the distillery for $64. 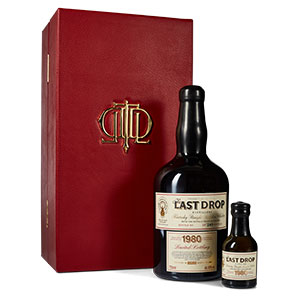 Distilled in 1980 at what was then called the George T. Stagg Distillery (now Buffalo Trace), this bourbon matured for 20 years in new charred oak barrels, then was moved to stainless steel vats.

If this whiskey was distilled 40 years ago, how does it have only a 20 year old age statement? The answer lies with those stainless steel vats. Only maturation time in barrels counts toward an age statement. Does whiskey keep changing and evolving once it's in stainless steel? Probably; chemical reactions already in motion when the transfer was made will keep going. But this is by no means a 40 year old whiskey, and calling those 20 years in stainless steel "maturation," as the press release for this bourbon does, is misleading. 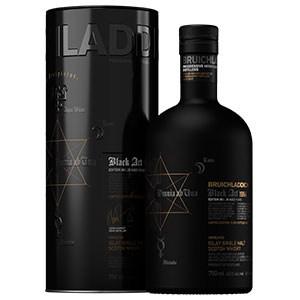 Bruichladdich deliberately withholds information about this whisky, other than its year of distillation. So there's not much to say except that it was made at the Islay distillery in 1994. 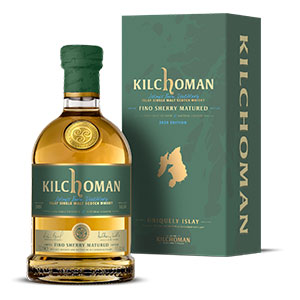 Made with malted barley peated to 50 ppm, this whisky spent its full maturation period in fino sherry butts from Bodegas Miguel Martín. 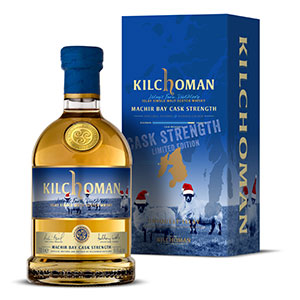 This is Kilchoman Machir Bay—one of the distillery's core whiskies—at cask strength. It's being released in time for the holidays: Hence the sheep in Santa hats on the label.

Fino sherry isn't used for maturing whisky nearly as widely as oloroso or PX, and it creates a much different profile from those two cask types. Laphroaig fans may remember that the 2018 Cairdeas was finished in fino casks. Since Kilchoman is heavily peated like Laphroaig, this whisky will likely reflect similar notes.

As for the cask-strength Machir Bay? If you like the version at 46% ABV, there will be even more flavor in this bottling—that's the beauty of cask strength. 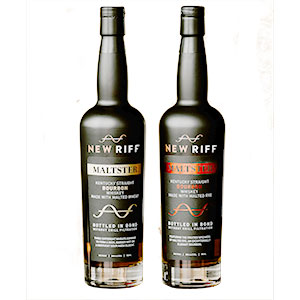 Availability: Limited edition; for sale in KY only

Made by New Riff Distilling in Newport, Kentucky, these 65% corn bourbons each include a malted grain in the mashbill: one with 30% malted rye, the other with 18% malted wheat, plus 10% unmalted wheat and 7% dark wheat. Like all New Riff whiskeys, they both meet the qualifications for being bottled in bond. 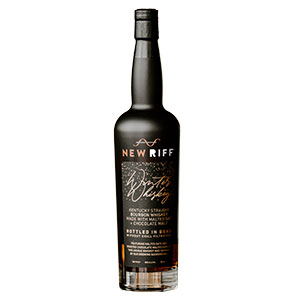 The first seasonal release from New Riff, this bottled in bond bourbon is made with its own unique mashbill that makes use of oats and specialty malts: 65% corn, 20% malted oats, 7% pale ale malt, 5% steel-cut raw oats, and 3% chocolate malt. The distillery says it's reminiscent of a chocolate oatmeal stout.

New Riff's core bourbon and rye are some of the best new American whiskeys available today, and the distillery's penchant for experimentation ("riffing") has also proved fruitful; its limited-edition Backsetter bourbon and rye, made with peated backset, both scored well in the Fall 2020 Buying Guide. I expect all three of these new releases to show similar high quality and offer unique flavors thanks to their unconventional mashbills. 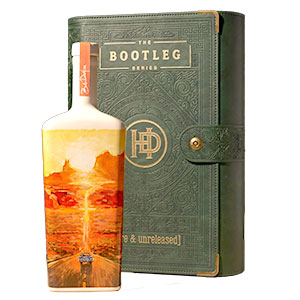 Made in Tennessee, this 15 year old bourbon was finished in Jamaican pot still rum casks. It's the second release in the Heaven's Door Bootleg Series.

Heaven's Door is backed by Bob Dylan, and its bottles are decorated with his artwork. This release is packaged in a ceramic bottle with Dylan's painting "Sunset. Monument Valley", and encased in a leather-bound case resembling a journal. 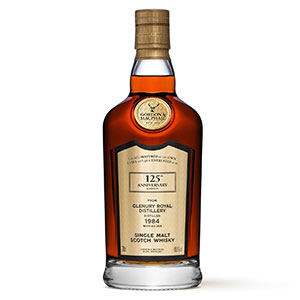 Bottled as part of Gordon & Macphail's "last cask" series in honor of its 125th anniversary, this single malt comes from Glenury Royal Distillery, which was shuttered in 1985. It was distilled on June 7, 1984 and bottled from a single first-fill sherry butt.

Look at those dates—this whisky was distilled just a year before Glenury Royal closed and was subsequently demolished. It really is a "last cask," and a great chance to taste whisky history if you have the means to buy a bottle. 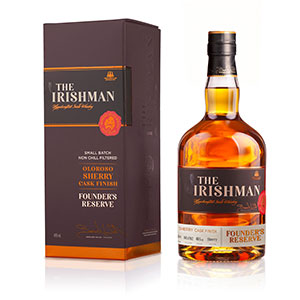 This limited edition version of The Irishman—a blend of triple-distilled single malt and single pot still whiskeys—matured initially in bourbon barrels and then spent a full year finishing in oloroso sherry butts.

Made by Walsh Whiskey, the Irishman is a blend, but features the unusual combination of single malt and single pot still, rather than the more typical single malt and grain. The core blend, at 40% ABV, scored 90 points when last reviewed; with higher proof and a sherry finish on this release, I'd expect even bolder and more robust flavors. 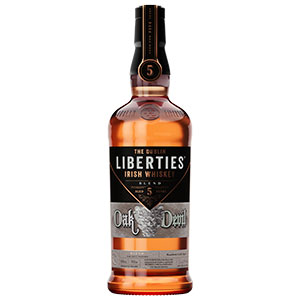 The Dublin Liberties Distillery opened in early 2019, one of several new whiskey producers in a historic center of Irish distilling. Its own whiskey is currently aging, and these four expressions were created by master distiller Darryl McNally from sourced stocks. They were previously available overseas, and were reviewed in theWhisky AdvocateBuying Guide back in 2017; check out the full panel of scores. 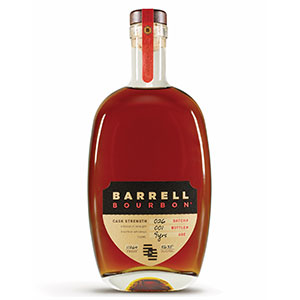 This release of Barrell had a multi-step blending process. First, the blenders combined 9 year old high-rye bourbon with 10 year old oak-forward and 11 year old sweet and toasty bourbons. Then, they put together 10, 12, and 15 year old citrusy bourbons with a 9 year old, floral high-rye bourbon. Finally, the two separate blends were mingled to create this final whiskey.

Each batch of Barrell is intentionally different, so there's no guarantee that if you like one you'll enjoy another. But we usually find the blends to be delicious and high quality; Batch 024 is freshly reviewed in the Fall 2020 Buying Guide, at 93 points. 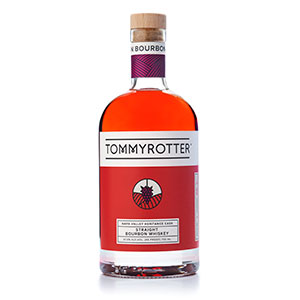 Distilled at MGP and finished at Tommyrotter Distillery in Buffalo, New York, this starts off as a straight bourbon made from three mashbills, resulting in a four-grain combination (corn, rye, wheat, malted barley). It's finished in cabernet sauvignon barrels from Taub Family Selections in Napa Valley, California.

Tommyrotter previously offered Napa Valley Heritage Cask, a whiskey that scored 87 points in the Buying Guide. That was a limited edition, made with a single mashbill, while Heritance Cask is a permanent part of the lineup and uses a combination of mashbills. 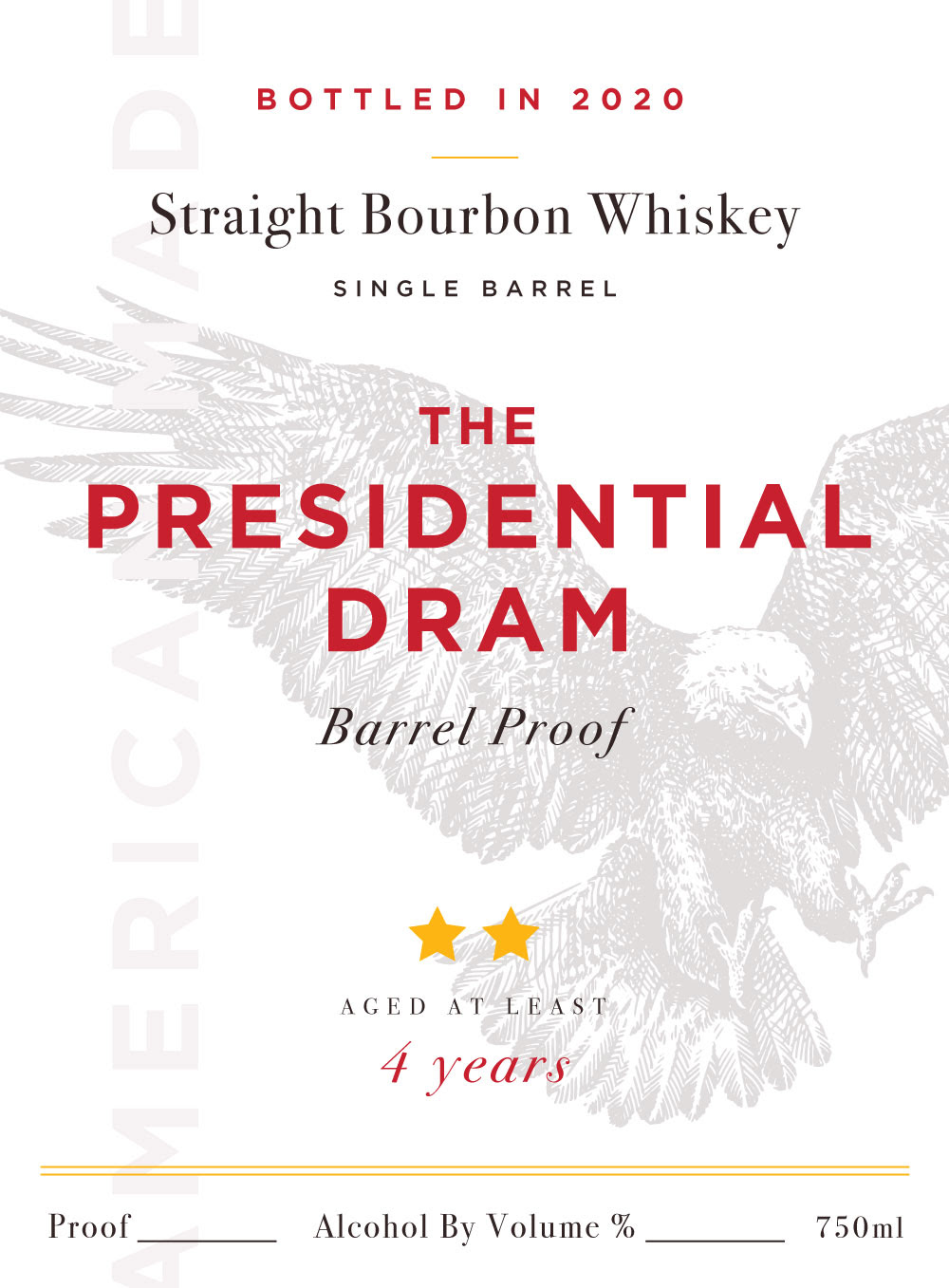 While the upcoming election pits Democrats against Republicans, these whiskeys aren't meant for specific political parties. According to Proof and Wood founder Dave Schmier, "We feel the most heated debate in America should be bourbon versus rye, and unlike political voting, in this case you can choose both." I'll drink to that! 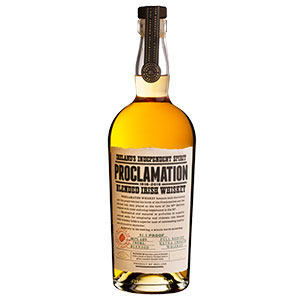 Made by the same company and blender behind Grace O'Malley, this blend is comprised of malt and grain whiskeys that were aged in bourbon casks, along with a touch of sherry-finished malt. It's available mainly online via BevMax and Mash & Grape.

While its sister brand is named for a famous pirate queen, Proclamation takes its moniker from the 1916 Proclamation, also known as the Easter Proclamation, in which the Irish Republican Brotherhood declared the nation's independence from the UK. 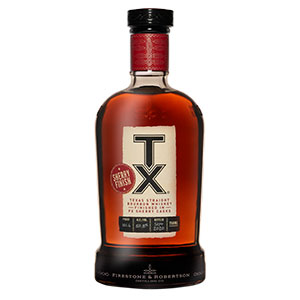 Made at Firestone & Robertson Distilling Co., these bourbons were aged for 4 years in new charred oak. One was then finished for 6 months in tawny port casks, while the other was finished for 8 months in Pedro Ximénez sherry casks.

Unlike TX whiskey, which is blended from an undisclosed group of sourced whiskeys, these bourbons are all distilled and matured at Firestone & Robertson. The distillery uses a proprietary yeast, isolated from a pecan nut, that lends its bourbon spice and dark fruit notes. 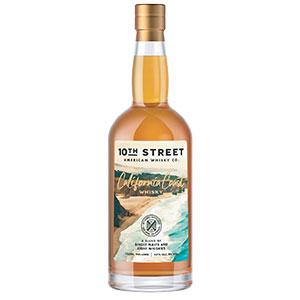 In Scotland, bottling a blended whisky with the same name as a single malt likely wouldn't be allowed, given the confusion it could potentially cause for consumers. But the field is wide open for American single malt, and 10th Street, one of the most exciting distillers of this style, is taking a bold step. Let's see where it goes! 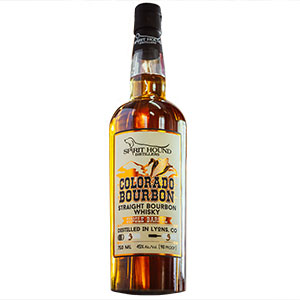 Availability: Limited edition; for sale at the distillery only

Spirit Hound has been making malt whiskey for several years in a delicate and aromatic style, but this is its first bourbon. Anyone who buys a bottle or a pour at the distillery is invited to participate in a tasting led by head distiller Craig Engelhorn on Nov. 1. In addition, Spirit Hound is auctioning off two commemorative bottles of the bourbon with burned “wildfire” labels to benefit the Lyons Fire Protection District and efforts to control the recent fires in Northern Boulder County.