Whiskey and coffee is a winning combination—whether you simply splash some whiskey into your cup of joe as an after-dinner treat, or prefer to mix the perfect Irish Coffee, with Irish whiskey, coffee, sugar, and fresh whipped cream. But rather than adding a little whiskey to coffee, these enterprising distillers are adding a little coffee to their whiskey.

Unlike coffee liqueurs, which almost always include a generous dose of sugar, these new whiskey creations strive for a purer expression of grain and bean, marrying high-quality coffee with credible whiskeys.

In January of 2020, Irish whiskey giant Jameson released Jameson Cold Brew, combining Irish whiskey with cold brew coffee flavoring. By definition, Irish whiskey can't include additives aside from caramel coloring and water, but this “whiskey specialty," according to the Alcohol and Tobacco Tax and Trade Bureau (TTB), will still find fans among Irish whiskey drinkers. The cold brew flavor, created from 100% Arabica beans from Brazil and Colombia, is added to Jameson's triple-distilled Irish whiskey. There are no added sweeteners.

Kickstart Your Day With These Whiskey-Flavored Coffees

FEW Spirits in Illinois takes a similar tack with FEW Cold Cut, released late last year. Founder and distiller Paul Hletko says he has been experimenting with whiskey and coffee for years, ultimately arriving at the genius idea to dilute his bourbon to bottle proof using cold brew coffee instead of water. “With cold brew coffee in particular, you get a lot of overlap play,” Hletko says in reference to the flavors of the bourbon and the coffee. Chocolate, vanilla, caramel, and nuts: All are flavors that Hletko identifies in both beverages. The cold brew used in Cold Cut is sourced from Chicago's Passion House Coffee Roasters, he adds. 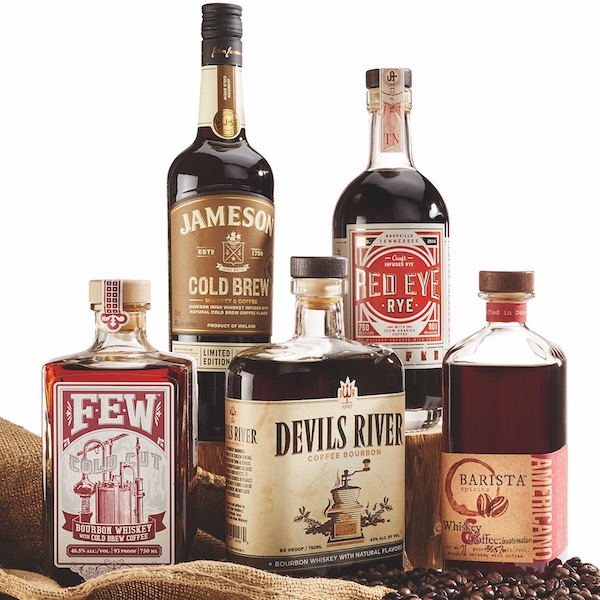 Coffee-infused whiskeys feature little to no sugar, setting them apart from coffee liqueurs and other distilled spirit specialties.

Looking beyond bourbon and Irish whiskey, Nashville's Standard Proof Whiskey Co. offers a less conventional combination: rye whiskey infused with 100% Arabica coffee from South America, with added cane sugar. In contrast to coffee liqueurs, CEO Bob Angus says the sugar in Red Eye Rye is “added at a low percentage to smooth out the arc on the coffee taste,” and the expression clocks in like full-proof whiskey at 40% ABV. Angus says the spice of the rye pairs particularly well with the coffee's boldness.

Continuing with the trend, the summer of 2020 saw even more coffee-infused whiskeys hit shelves: Devil's River Coffee Bourbon, Barista Spirits—a set of three whiskeys from Deviation Distilling—and two expressions, Original and Dark Roast, from First Light, each infused with a different type of coffee. While they won't likely replace your morning coffee, or your nightly dram, these coffee-infused whiskeys deserve a look from fans of either beverage.

FEW Cold Cut—87 points, 46.5% ABV, $45
What it is: Bourbon proofed down with cold brew coffee instead of water
Tastes like: Mint-chocolate candy, licorice, blueberry, black pepper, and oak
Drink it: Neat, on the rocks, or in a Coca-Cola Highball to highlight the chocolaty depth

Devil's River Coffee Bourbon—40% ABV, $27
What it is: Bourbon, cold brew coffee, and blue weber agave syrup
Tastes like: Dunkin' Donuts coffee, bittersweet and milk chocolate, and brown sugar
Drink it: Splash some in your iced coffee or cold brew and top with whipped cream for a decadent treat.

Barista Spirits Americano—35.5% ABV, $33
What it is: Bourbon and Guatemalan coffee beans
Tastes like: Dark roast coffee, pecans, cocoa powder, and unsweetened chocolate
Drink it: Combine with espresso and hot water for a whiskey Americano.