To taste most super-aged whisky, especially scotch, requires a big wallet or special connections. Even then, many very old whiskies are bought as collectibles, regarded as investments and destined to remain unopened forever. You may have seen these pricey bottles locked behind glass or at the tippy-top of an extravagant bar and wondered: what does a whisky that old taste like? Well, Craigellachie is giving you a shot to find out with its new 51 year old single malt, which is launching alongside a program that will allow drinkers to have a taste for free. 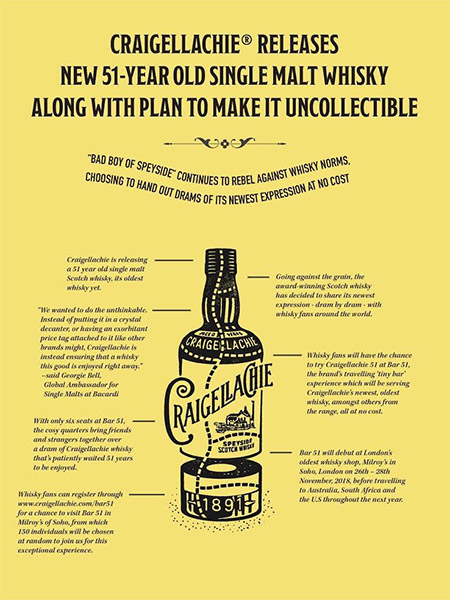 The Speyside producer announced this week that its 51 year old scotch will travel around the world along with a "tiny bar" experience called Bar 51. The pop-up bar will stop first in London, setting up in the city's oldest whisky shop, Milroy's of Soho, from November 26 to November 28. Attendees will be treated to a tasting of Craigellachie 13 year old (90 points) and Craigellachie 17 year old (87 points) before enjoying a dram of the 51 year old. Cocktails will be served afterward in the location's hidden cocktail bar, The Vault. Reservations go live on Monday October 29 at 9 a.m, but be advised: there are only 150 spots available, so you'll have to act fast. Tickets can be reserved at the brand's website.

After its London debut, Bar 51 will stop in Australia, South Africa, and New York City over the next year. Update 4/12/19: Bar 51 will set up shop at New York City's Peppi's Cellar from May 7 to 9. Anyone interested in attending can enter a lottery at theCraigellachie website. There are 150 spots in total; those selected will be allowed to bring an additional guest. Winners will be notified on April 29.

Craigellachie 51 year old is bottled at 40.3%. Unlike many super-old single malts, it doesn't come in a fancy decanter with an elaborate box and gilded stopper; instead, the bottle looks pretty similar to Craigellachie's core range. The brand offered little in the way of tasting notes in its press release, which means the lucky drinkers that get a chance to taste the whisky will get to form their own impressions. We are certainly eager to get a taste ourselves—even whisky professionals rarely, if ever, get to taste such a rare scotch. Craigellachie is the first distillery to offer its oldest whisky free to the people: here's hoping that it starts a trend.
tsimmons Scotch Single Malt News Craigellachie