Discover the Unique Flavors of Whiskey Made From Oats

Oats! They're not just for breakfast anymore. Distilling with oats “creates a very creamy whiskey,” says Sonat Birnecker Hart, president and co-founder of Koval Distillery in Chicago. “It covers your palate. It's a little bit earthy…and has a nice sweetness to it as well.” Using 100% oats, Koval crafts a whiskey that Hart describes as clean, bright, and “incredibly grain-forward.”

Major American distillers including Jim Beam and Buffalo Trace have previously experimented with oats, but only on a small scale. Perhaps the reason we haven't seen oats widely used in whiskey is the list of unique challenges they present, from milling the thin, pliant grain, all the way through distillation. In creating Woodford Reserve's Master's Collection Oat Grain bourbon, which includes 18% oats, master distiller Chris Morris was met with foaming fermentation that required filling fermenters to a lower than normal level. The oats also created a sticky mash, which made it difficult to monitor and regulate temperature. “But we were prepared for this,” Morris says. “Exotic grains like oats are going to be sticky, are going to foam.” And in the end, the challenges were made worthwhile by the resulting whiskey. “It's distinctly oatmeal, raisins, dates, cinnamon, brown sugar,” Morris says. “It reminded me of an oatmeal cookie.”

Portland, Oregon-based Stone Barn Brandyworks has experimented with a variety of single-grain expressions, including oat, which “produces a whiskey that's really soft and relatively light and fruity in flavor,” one that could appeal to a potentially broader demographic than a robust bourbon or rye, says head distiller Andy Garrison. “Everyone eats oatmeal at some point, so people know the smell and the flavor of oats.” However, Garrison finds oats also perform well in concert with other grains, noting how oats “gave us the sweetness and fatness of mouthfeel that we liked about [oat whiskey], but mixing in a portion of rye or malted barley added a little bit more complexity, spiciness, more intensity than the pretty, sweet, light oat character.”

While oats seem to be enjoying a moment with craft distillers, the grain has a history. Guided by a 19th-century Irish whiskey recipe, Ransom Spirits' The Emerald 1865—made from around 15% oats, along with malt, unmalted barley, and malted rye, and distilled in their direct-fired alembic pot still—seeks to recreate the traditional Irish style. “When it comes off the condenser as white dog, oats are really aromatically apparent,” founder Tad Seestedt says. In addition to troublesome stickiness in the mash tun, oats may have fallen out of favor in part because they yield less fermentable sugars than other grains, as Seestedt and other distillers have noted. But for those prepared to tackle these challenges, oats can lend a generous palate weight and viscosity. “I definitely would not consider it a light-styled whiskey,” he says of The Emerald. “In our experience, oats add body.” 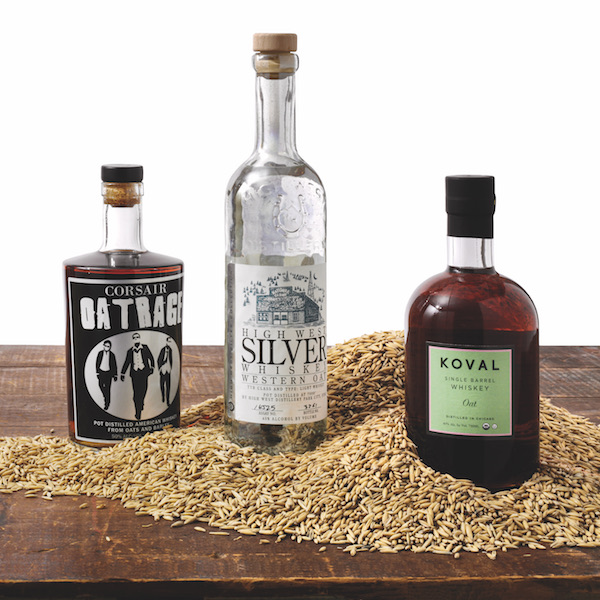 To experience oat whiskey in its purest form, reach for High West's minimally aged Silver Western Oat, distilled from 85% oats and 15% malted barley. High West master distiller Brendan Coyle notes “a subtle, almost vanilla-like flavor,” and the use of hulled oat kernels, or groats, improves both yield and taste. “You get very little extract, flavor, and aroma from the hull, so when you use 100% oat groats in that mash, you're really retaining all the great flavor, aroma, and extract properties of the oat,” Coyle explains. High West also produces a whiskey called Valley Tan using wheat and oats in the manner of Mormon pioneers.

For whiskey lovers seeking something different, oats offer a new dimension, whether distilled alone or together with their more familiar corn, rye, and barley counterparts. “An oat whiskey really highlights another side of what whiskey can be, both in flavor and in mouthfeel. It's not going to be like a rye, and it's not going to be like a bourbon, and that in itself is exciting and fun,” Hart says.

Experience the flavor of oats with these 7 whiskeys