How Distillers Are Blending Sourced Whiskey With Their Own

Many drinkers are quick to inspect the back label of a whiskey bottle to determine the origin of the liquid inside—whether it was actually distilled by the people who sell it or if it was sourced from elsewhere.

Often, the answer is both.

That's the approach taken by Smooth Ambler Spirits and its aptly named Contradiction bourbon—a blend of straight bourbons combining about one-third house-distilled whiskey with the balance sourced from another distiller.

While a popular approach now, this was once a novel idea, says national sales and marketing director John Foster, who has been with Smooth Ambler since 2009. “At first there were two camps,” he says. “You either made everything from scratch and everybody else was a poser, or you sourced everything and pretended you made it.” Sourcing was not part of Smooth Ambler's original plan.

How Open Should Brands Be About Sourcing? Our Editors Debate

Sometimes however, serendipity leads to success. “Contradiction is our most popular product,” Foster adds. “It tastes good, is priced right.” The sourced bourbon that makes up two-thirds of the mix is rye-recipe while the house-made bourbon is wheated, the same liquid as Smooth Ambler's 100% house-made Big Level bourbon. A Contradiction rye is coming in the future.

The best of both worlds

The blending of sourced and in-house whiskey has its roots in the American craft whiskey movement. When American whiskey came roaring back in popularity nearly two decades ago, many new producers entered the market. Some started to distill whiskey right away, while others got rolling with whiskey they purchased, only to begin distilling later. As time goes on, more and more of these new distillers have house-made liquid ready for market, although “ready” can be a flexible concept. Craft distillers often bottle their whiskey at 2 years old or younger, even though American whiskey— unofficially, but traditionally—isn't considered mature before its fourth birthday. Furthermore, producers who built their business on sourced or contracted whiskey often face a dilemma: how to smoothly integrate their own make into their successful, existing portfolio. 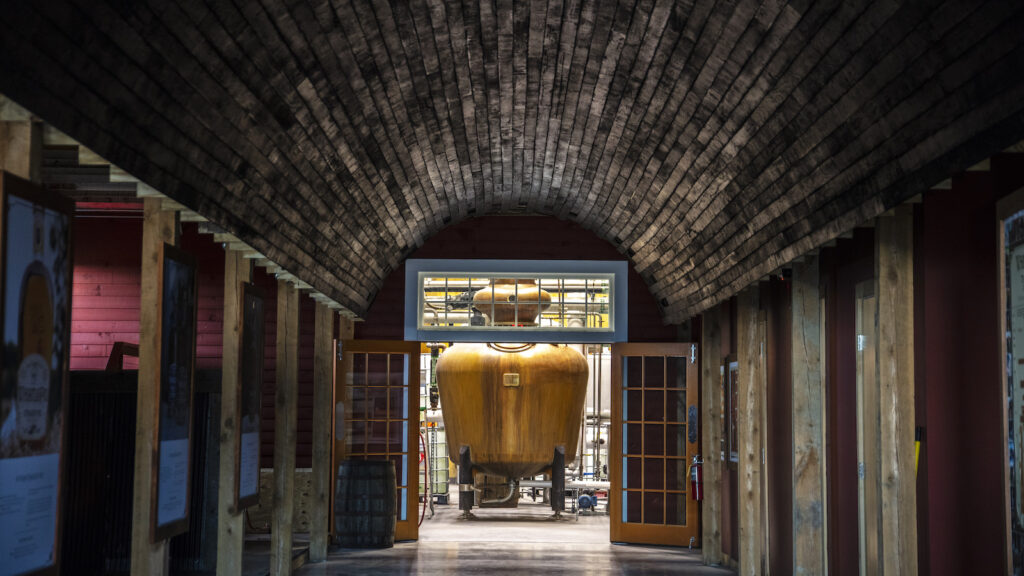 Vermont's WhistlePig Distillery rose to popularity with its sourced whiskies, but also distills its own, and is bottling more and more of it.

Some distillers choose to introduce house-made as a new product and phase out the sourced. Others might continue with a successful sourced product as-is, then expand the portfolio to include their house-made whiskeys.

But combining house-made and sourced whiskey in the same bottle has become a popular solution, largely due to the fact that the new distillers' own-make whiskey is a little too young to sell on its own. Why not mix it with sourced whiskey and hope the result is greater than the sum of its parts? That's the idea behind products such as Smooth Ambler's Contradiction, Bardstown Bourbon Co.'s Fusion Series, and WhistlePig's FarmStock.

Five years ago, such decisions might have been forced. Sourced whiskey had become scarce and distillers had stopped accepting new contracts, driving several non-distiller producers to become distillers. Examples include Angel's Envy, Luxco (maker of Ezra Brooks, Rebel Yell, and Blood Oath, among other brands), and Michter's. Even Diageo (which produces Bulleitand I.W. Harper), which hadn't distilled in Kentucky for two decades, built a new distillery there and is at work on a second one. Some of these distillery expansions, and many new distilleries, are so large in scale that sourced whiskey is once again available and affordable, especially at young ages, and many distillers have enough capacity to offer contract production.

From farm to distillery 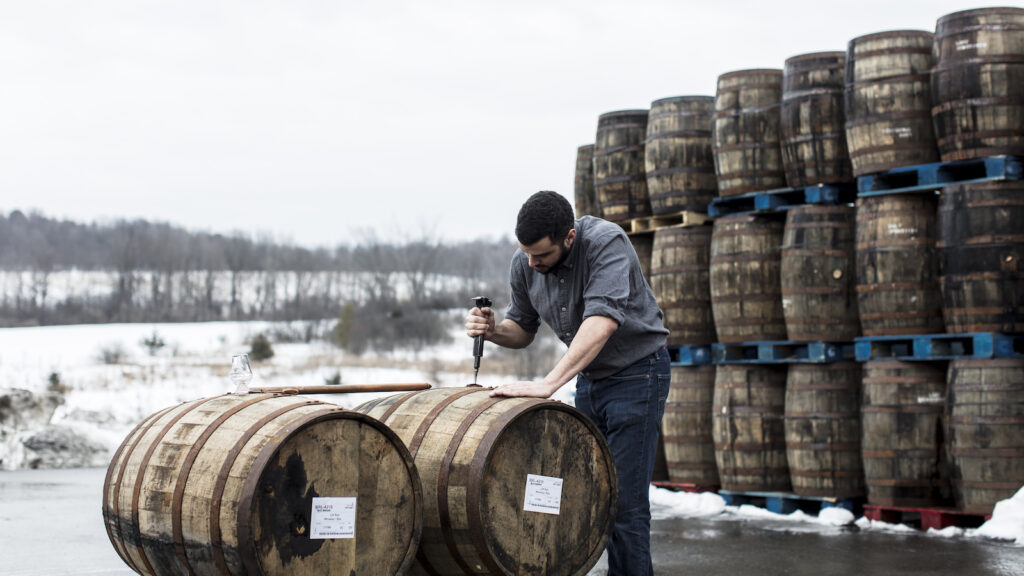 Vermont-based WhistlePig started out as a farm. “We have been growing our own grain for seven years,” CEO Jeff Kozak says. “We've been distilling for four.” WhistlePig initially made a big splash with its straight rye whiskeys, a variety of expressions sourced from Canada and Indiana. In introducing its FarmStock line, WhistlePig blended Canadian and Indiana whiskies with rye grown and distilled at WhistlePig Farm. Over time, the amount of house-made whiskey in the bottle has increased, with the third FarmStock release being the first batch that is mostly (52%) house-made liquid.

For eager fans of this relatively new distillery, FarmStock acts as a bit of a teaser, a glimpse of what's to come. “For WhistlePig, estate distillation entails everything from growing our own grain to using our well water and aging in barrels coopered from locally-sourced Vermont oak,” says Kozak. “We're continuously experimenting with different mashbills and barrel toast/char profiles, and even different wood types, but the key theme is ensuring the highest-quality production possible at all stages. FarmStock was created to showcase our first produced-in-house distillate.”

Experimentation and collaboration are the watchwords at Kentucky's Bardstown Bourbon Co., which makes whiskey for its own products, distills for others, and acquires whiskey from other distillers. “By doing collaborations with different companies, we're bringing in consumers who have never tasted bourbon,” says co-founder and former CEO David Mandell. The company has ample warehouse space, allowing it to build an inventory of house-made and sourced whiskey that continues to age. “Bardstown Bourbon Co. is about making great bourbon,” says Mandell. “It's the modern bourbon experience, bringing everything together.” 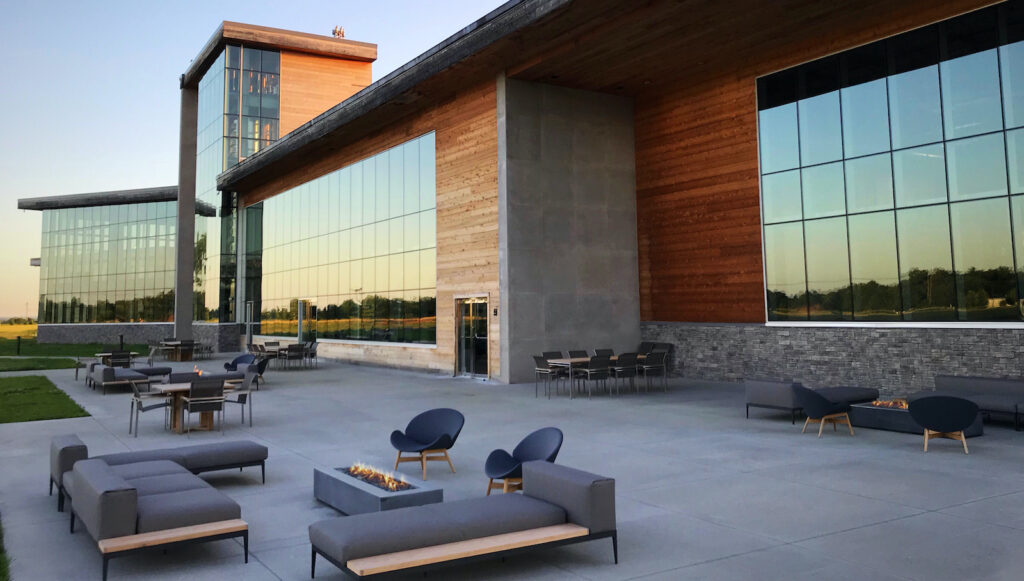 With its Fusion Series, Bardstown Bourbon combines well-aged sourced Kentucky bourbon with younger house-made bourbons, one rye-recipe and one wheated.

With its Fusion Series, Bardstown Bourbon combines a sourced 11 year old Kentucky bourbon with two young (2 to 3 year old), house-made bourbons, one rye-recipe and one wheated. While skeptics might see dosing much younger house-made whiskey into older sourced whiskey as aimed at marketing or bragging rights, Mandell says it can lead to desirable flavors. “We're not going to put out a 2 or 3 year old whiskey,” says Mandell. “But they add some interesting elements. The wheat provides really nice sweetness, while the rye gives it some really nice spice.” But creating the blend is no simple matter. It took 52 blind tastings to craft the perfect combination for Bardstown Bourbon Company's Fusion #1. “We love innovating, experimenting, trying different things,” says Mandell. Along with distilling, maturation, blending, and bottling, the company has a restaurant and a bar with a 400-bottle vintage spirits collection; an on-site hotel is part of their master plan.

Yet perhaps no one has more fully integrated house-made and sourced liquid than Utah's High West. Its most popular products, including Double Rye!, Rendezvous Rye, Campfire, Yippee Ki-Yay, and A Midwinter Night's Dram, all combine sourced with house-made liquid, although the company keeps the exact proportions a secret. “My goal is to have as many different colors as possible to paint the most beautiful picture,” says master distiller Brendan Coyle. High West distills 24/7 with a 1,500-gallon Forsyths four-plate hybrid still and uses a variety of mashbills and yeast strains. Some of its yeast is propagated on-site; one strain is proprietary. “We're producing for flavor profiles not available through sourcing,” says Coyle, rattling off High West's array of whiskeys: “Four ryes, several malts, no bourbon yet.”

A six-person sensory panel, which includes Coyle, spends about 60% of its time blending. “Because sourcing is opportunistic, we have to keep changing components to keep the flavor profiles consistent” for the distillery's core products, Coyle explains, whereas with seasonal releases like Yippee Ki-Yay and A Midwinter Night's Dram, “we purposely drive a little bit of difference.”

For every distillery that has embraced combining sourced and house-made liquid, at least one is walking away from sourcing to focus solely on making its own whiskey. “We decided to source early on to be able to have a better revenue stream to fund the filling of our own barrels,” says Mike Blaum, co-owner and chief distiller of Blaum Brothers Distillery in Galena, Illinois. “That also enabled us to fine-tune our batch blending skills, which we could use with our own 100% house-made small batch blends.”

Now the brothers—who already offer 100% house-made straight bourbon and straight rye in their core range—are close to the end of their sourced whiskey adventure. “When we purchased our first barrel of MGP whiskey, we both agreed that we wanted to be free of sourced baseline products once our own whiskeys were available,” says Blaum. “That transition started when we ran out of the Knotter bourbon and will be concluded at the end of this year when our Oldfangled Knotter bourbon is gone.”

from old distilleries to new distilling 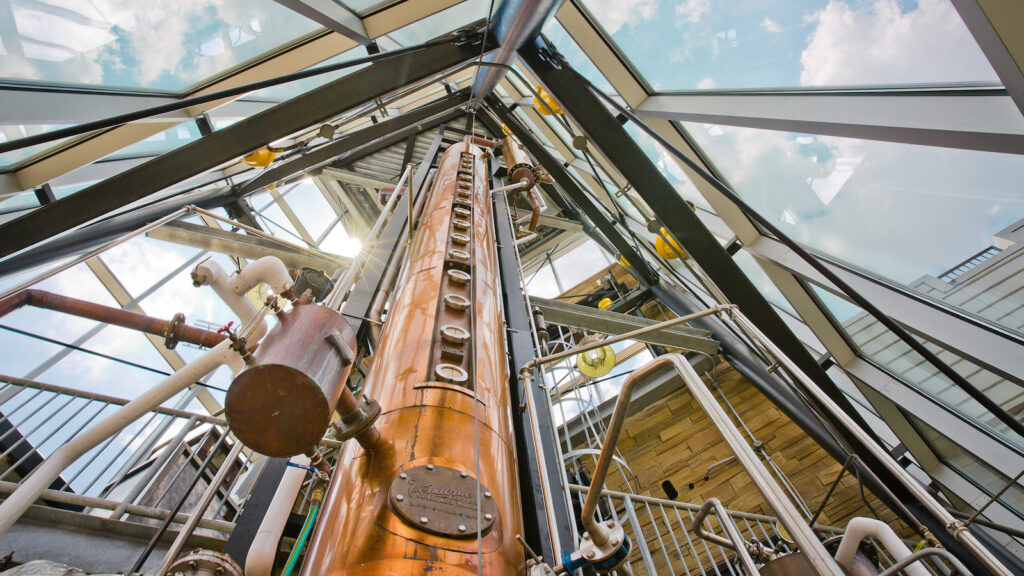 In the beginning, New Riff Distilling offered sourced whiskey to generate revenue, but phased it out when its own bourbon and rye had matured enough to sell.

New Riff Distilling in Newport, Kentucky, across the river from Cincinnati, also got started using whiskey from MGP, the former Seagram Distillery in nearby Lawrenceburg, Indiana. But the company went even further, enlisting the distiller who made it, Larry Ebersold, to consult on its distillery design and house-made product. “We did not transition from sourced to in-house,” says New Riff co-founder, vice president of strategic development, and distiller Jay Erisman. “We stopped selling their whiskey, killed that brand off, and started selling our own stuff under our own name. We never had a strategy to blend the two together.” Although the blending is not in the bottle, it is in the product's DNA. Like its sourced whiskey, New Riff's house bourbon is high-rye, about 30%. “The Indiana bourbon, aged from 8 to 12 years, gave us a chance to work with a well-aged whiskey while our own stuff rested in the barrel,” says Erisman.

While the notion of blending sourced whiskey with younger house whiskey might feel like a relatively new construct, that's not the case. In the mid-1990s, Brown-Forman created Woodford Reserve from bourbon made entirely at its Shively, Kentucky distillery, based on the Old Forester recipe. In May of 2003, the company started to mix in whiskey made at the restored distillery in Woodford County now devoted to Woodford Reserve. It's the same recipe, but made in alembic stills (i.e. pot stills with no rectification section) and using a different water source. Since then, every batch of Woodford Reserve Distiller's Select has included bourbon from both distilleries, in widely varying proportions.

In 1997, Heaven Hill's distillery in Bardstown burned to the ground and was never rebuilt. For two years, Heaven Hill distilled its bourbons and ryes at Brown-Forman and Jim Beam, then bought the Bernheim Distillery from United Distillers (now Diageo). Integrating whiskeys from those various sources into its extensive portfolio wasn't a problem.

Blending sourced and house-distilled whiskeys may muddy the waters for consumers who have a purist position on where their whiskey comes from; however, there's no denying the whiskeys often seem to play nicely in the bottle. Once rare in the U.S., this approach is rapidly becoming routine, and achieving high marks. When quality spirit from different sources comes together to create original flavors, it can be a winning combination for all whiskey drinkers.