How To Cook Better with Whisky

It's not unusual for bourbon to appear in barbecue sauces or sweet desserts, but now top chefs are finding new applications for whiskey in kitchens where wine once ruled, bringing whiskey's beautiful flavors to salads, seafood, bacon, and more. Here are some great ways to have your whiskey—and eat it too.

At Hewn Bakery in Evanston, Illinois, Ellen King caramelizes onions to fold into her rye bread dough, deglazing the pan with F.E.W. Spirits' bourbon. “You're getting up all the fond from the onions, that dark rich flavor,” she says. “The alcohol gets all cooked off, so it's really just the flavor [of the bourbon] that carries into the bread.” 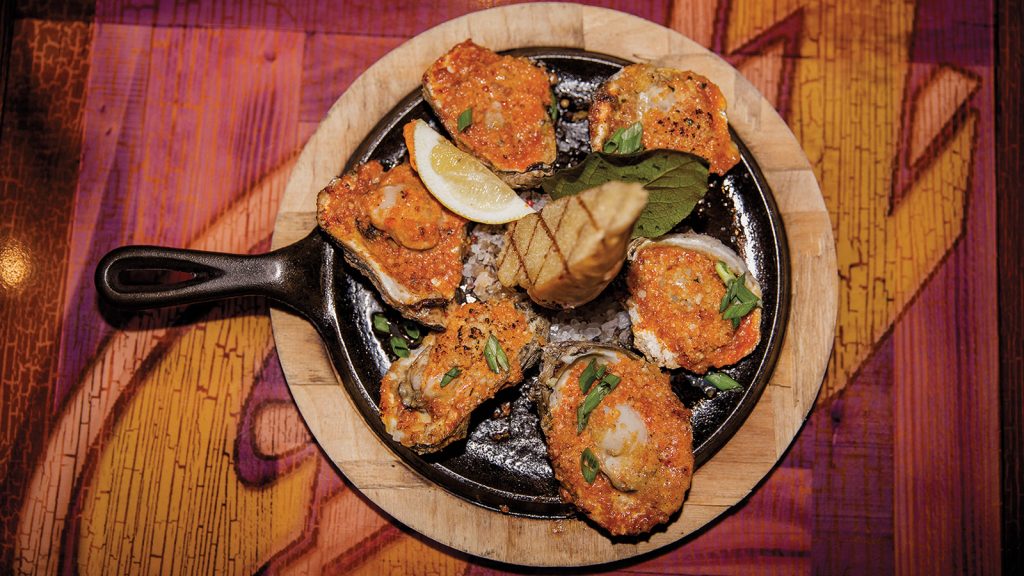 Seafood and whiskey might not sound like a natural pairing, but it works. Chef Daven Wardynski at Florida's Omni Amelia Island Plantation Resort serves seared cobia with an egg that has been poached in a 2-to-1 mixture of maple syrup and American whiskey. At L'Auberge Lake Charles Resort in Louisiana, chef Lyle Broussard grills Gulf oysters topped with whiskey butter—an indulgence that's dangerously easy to make. Just whisk a pound of softened butter with a tablespoon or two each of Worcestershire sauce, minced garlic, chopped parsley, cayenne pepper, paprika, horseradish, ground tasso, black pepper, and kosher salt, then add a quarter cup of white wine and 4 ounces of Jack Daniel's Tennessee whiskey. It amps up grilled fish of all kinds, not just oysters.

Chef Edward Lee of 610 Magnolia, and MilkWood in Louisville and Succotash in Washington, D.C. dresses a salad of Bibb lettuce, fried collard greens, sliced peaches and radishes, grapes, and spiced pecans with a house-made bourbon vinaigrette. Lee simmers 12 ounces of bourbon in a saucepan until reduced by half, then purées it with apple cider and rice vinegars, shallots, Dijon mustard, garlic, kosher salt, black pepper, sorghum syrup, olive oil, and neutral salad oil. He says he prefers wheated bourbons. “With bourbon, you're getting mostly sweetness from corn, but we found that the wheated whiskeys have a rounder flavor,” he explains. 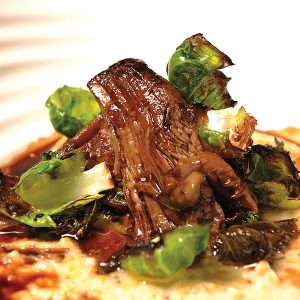 At his three restaurants, Lee often braises meat in a mixture of stock and bourbon. For a 6-pound lamb shoulder, he uses around 2 cups of 6 year old bourbon and 3 cups of chicken stock, braising the meat on low heat for two hours. “If you're cooking with bourbon, you want to taste it,” he says.

Whiskey and meat, in fact, work well in a number of applications. Chef Angie Mar learned a unique dry-aging technique while working in Paris, and now offers whiskey-aged tomahawk rib eye steak at her New York City restaurant, The Beatrice Inn. “We wrap beef in whiskey-soaked cloths and just let it age like we normally would,” she explains. “It imparts this amazing flavor. You get the oak and the vanilla…with none of the alcoholic residual you would get off of just drinking whiskey.” Mar uses a variety of whiskeys for the 160-day aging process, but says Brenne French single malt is her favorite. The Beatrice Inn also offers bone marrow-and-bourbon crème brûlée—a savory-sweet custard served in beef bones. 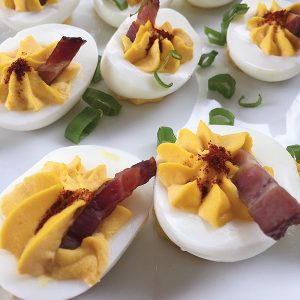 A Cure for Boring Bacon

Chicago-based chef Cleetus Friedman has been cooking with whiskey for years, first at Fountainhead and now at Theater on the Lake. One of his most popular creations is whiskey bacon. Soak a 10 to 15-pound pork belly in 12 quarts of water combined with 2 cups of honey, a cup and a half of salt, 3 tablespoons of pink curing salt, and 3 cups of bourbon for five days. Friedman smokes the pork belly over bourbon barrel staves, but since most home cooks don't have access to their own barrels, he suggests soaking oak chips in bourbon and smoking the meat slowly for nine to ten hours. “The brine imparts a nice sweetness to the bacon, but in the smoke, that's where you get [all the flavor],” Friedman says. In addition to making BLTs and deviled eggs with the bacon, he likes to chop it up into batter for waffles, serving them with bourbon barrel-aged maple syrup.

All chefs agree—cook only with a whiskey you'd want to drink. “One of my number-one rules is when you're cooking with something, you better like drinking it,” says Friedman. And don't forget, he adds, “You've got to have some whiskey on the side to drink.”

sbarton Whisky Life Food How To