The drive to Amrut Distillery takes me through the crowded, frenzied, disorienting streets of Bangalore. As the car noses a dump truck festooned with garlands (“Horn OK!” reads the bumper in flowery, colorful script) and auto-rickshaws blare their old-fashioned klaxons, motorbikes loaded with two or three riders apiece weave through the gridlock. Slowly, we snake our way past carts laden with fruit; elaborate temples rising from behind concrete walls; gnarled Bodhi trees adorned with rainbows of flags, flowers, and images of the gods; and cows placidly munching garbage in the median. Finally, open highway—my white-knuckled grip loosens just a bit—and the distillery looms in sight.

There is no visitor center at Amrut, just a squat office building fronted by a few palm trees, with the industrial distillery buildings crowded behind. In the small sitting area, framed awards, photos, and newspaper clippings cover an entire wall, trumpeting the company's achievements. This feeling of pride is echoed by Amrut master distiller Surrinder Kumar, the man most responsible for Indian single malt's international acclaim. “We had to work hard to make people believe that India can make a good international whisky,” he says as we walk past shoulder-high towers of barrel hoops and into the bottling hall, which is bustling with women in green saris and white kerchiefs labeling and corking bottles. “All that we have done—I don't feel like we have [ever] failed. We have done everything on our own.”

Kumar launched Amrut's malt whisky distillery in 1987, installing two locally made pot stills and open-top vats for fermentation. The move was a sensible business decision for the company, which primarily makes IMFL (Indian Made Foreign Liquor, made from a large amount of neutral, usually molasses-based spirit laced with a small amount of grain or malt whisky). Prior to making its own, Amrut imported malt whisky from Scotland to blend with its neutral spirit for IMFL. But Amrut produced more malt than it needed for blending—much of it aging for several years longer than necessary. In 2004, that surplus spawned a brand new type of whisky: Indian single malt.

Get to Know Indian Single Malt With These 5 Whiskies

It's becoming hard to remember a time when Scotland, and occasionally Ireland, were the sole domain of single malt whisky. Amrut created a space where none had existed, and stood alone for nearly a decade until the next Indian single malt—Paul John, distilled in Goa—launched in 2012. In 2016, Rampur, made in the foothills of the Himalayas, joined them. Like Amrut, these malt whiskies contribute flavor to locally sold IMFL. But bottled as single malts and exported around the world, today all three go toe to toe with their counterparts from Scotland, Japan, and beyond. 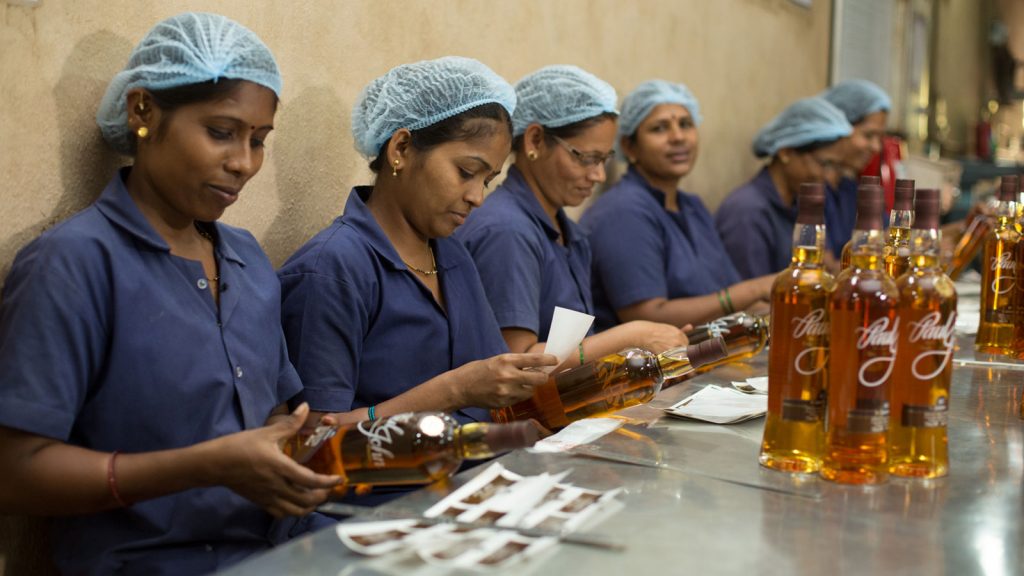 Searching for a Place

Unsurprisingly, a Brit brought whisky-making to India. The brewery and distillery, started by Edward Dyer, thrived in the mid-19th century Raj era and operates today as Mohan Meakin, making the popular Old Monk rum and Solan malt whisky, among other local brands. Over time—with the rising demand for grain for food—India's whisky making evolved to use more sugar industry byproducts and less grain. Today, India is the largest whisky market in the world, draining 2.3 billion bottles a year. Most of that is IMFL. If you order a whisky in India, chances are good that you'll get something that would never pass as whisky in the West—a thin, feinty spirit with little to no wood influence.

When Amrut released the first Indian single malt in 2004, the company chose to blaze its trail in the UK, which has a much higher proportion of whisky connoisseurs than India. But no one had ever heard of single malt from India, and whisky drinkers were reluctant to take the first sip. So Amrut struck upon a simple strategy: placing its whiskies alongside scotch in blind tastings, and letting tasters be the judge. More often than not, people thought they were drinking 12, 15, or even 18 year old scotch, according to Kumar. In actuality, because of the country's extreme climate, Amrut and other Indian single malts are typically aged 4 to 6 years, occasionally reaching 8 years. The oldest whisky bottled to date, Amrut's Greedy Angels, topped out at a decade.

Those first inductees to Indian single malt have since been joined by eager throngs, and Amrut's pioneering efforts have paved the way for Paul John and Rampur. Although still in its infancy, Indian single malt is a rich and exciting playground for whisky lovers. Amrut produces dozens of different bottlings, from its core single malt and peated expressions to special editions like Spectrum, aged in casks made of multiple stave types, and Two Continents, a whisky aged first in India and then in Europe. Paul John, too, offers a range of expressions, including cask strength and single cask whiskies. Rampur has plans to launch additional whiskies next year—and there's much more on the horizon from all three distilleries.

Indian single malt does not succeed because of its diversity, or the novelty of subtropical whisky, but thanks to its flavor. Certain factors, from the raw materials to the climate, impart a distinct flavor profile—rich and rounded, spicy, layered with juicy ripe fruits—that sets it apart from other single malts. 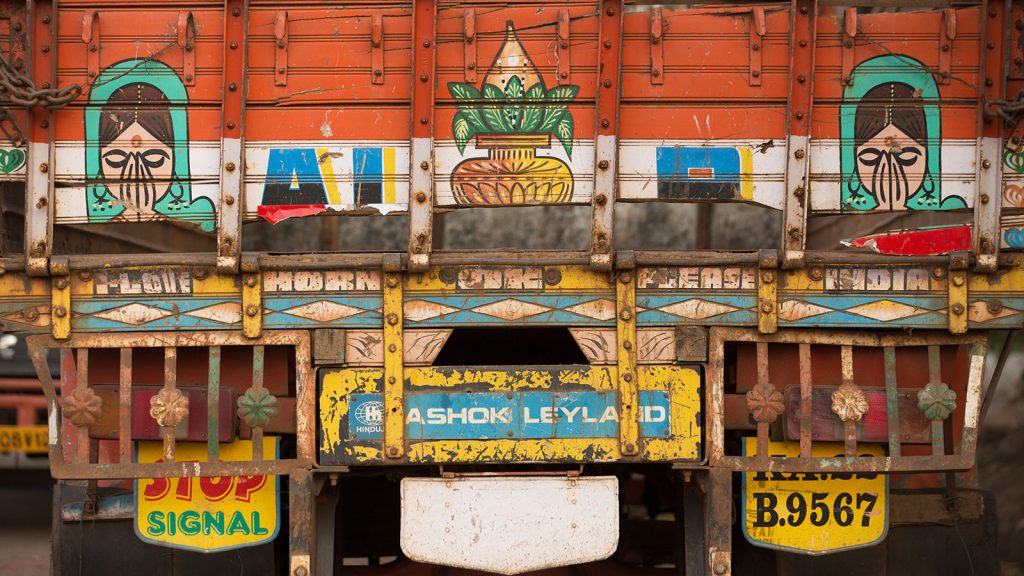 India's love of color and beauty can be seen everywhere—even on the back of a truck at Paul John Distillery.

“Indian whisky…is hugely influenced by our local barley varieties and, most importantly, our year-round warm weather,” explains Charnelle Martins, an Indian whisky researcher. She points out that Indian six-row barley differs from Scottish two-row barley in starch and protein content, resulting in a more complicated malting process and sometimes grainier flavors. “Our warmer temperatures create unique fermentation and maturation kinetics that are very different from those in Scotland, allowing very distinct flavor congeners to develop,” she says, adding that the angels' share (the amount of liquid in the cask lost to evaporation during maturation) can be as high as two percent per month—versus around two percent per year in Scotland. “[This] causes a very rapid extraction of wood-derived compounds that contributes to the uniquely spicy note we often taste in Indian whiskies.”

Their flavor isn't the only thing distinctly Indian about these whiskies. The production methods themselves are adapted to the environment. “We have never tried to copy [Scottish-style distilleries],” Kumar says. “Our method is entirely different…developed in-house as per our requirement.” Whiskies like Amrut Spectrum embody this inventiveness, and the country's liberal regulations—currently being set by the Food Safety and Standards Authority of India—allow the distillery to dream big and innovate boldly.

Yet India remains central to Amrut's identity. The name Amrut itself comes from a Hindu legend about a battle between gods and demons and means “elixir of life.” “We always made that loud and clear,” says Ashok Chokalingam, Kumar's named successor. “We are a single malt from India.”

Paul John is a whisky firmly rooted in its native Goa, a state on India's west coast with pristine beaches and lush tropical forests. Sitting in his blending lab looking out over the jungle-covered hills, master distiller Michael D'Souza explains his whisky philosophy. “I wanted to create something different,” he told me. “When I started creating these expressions, I always kept India in my mind. India is a massively diverse nation…[and Paul John whisky] has our own regional characteristics.”

Like Amrut and Rampur, Paul John uses Indian barley and local water. Because of Goa's year-round heat and humidity, which lead to intense wood extraction and a high angels' share, D'Souza ages almost everything in American bourbon casks. Using European oak casks, he explains, would result in an overly tannic whisky, although he's currently experimenting with secondary maturation in other types of casks, including oloroso and PX sherry. Paul John has both a metal warehouse with casks stacked thirteen high that averages 77 degrees Fahrenheit throughout the year, and an underground aging cellar that's a few degrees cooler; both reach higher temperatures in some seasons. Thanks to the rapid maturation in this environment, just five years after launching the brand, D'Souza already has a wealth of mature whiskies to draw upon when creating special expressions—like the upcoming Exceptional, or a new series of whiskies named for the Hindu zodiac and blended to match each sign's personality. The first one, Kanya, is launching in early 2018.

There's something revealing about drinking whisky in context—in the place where it's made. Much like Lagavulin tastes like Islay in a glass, Paul John whisky, sipped with lunchtime's spicy fish curry still lingering on my tongue, feels a natural part of the landscape in hot, sticky Goa, dripping with the scents of tropical flowers. Likewise for Amrut. In a blind tasting in Bangalore, with the monsoon rains looming, Amrut Peated wins out over two single malt scotches (and a Paul John) for being most harmonious and satisfying. “This whisky is bursting with tropical fruit, energy, and layers of complexity—it tastes like this place,” I write in my notebook. 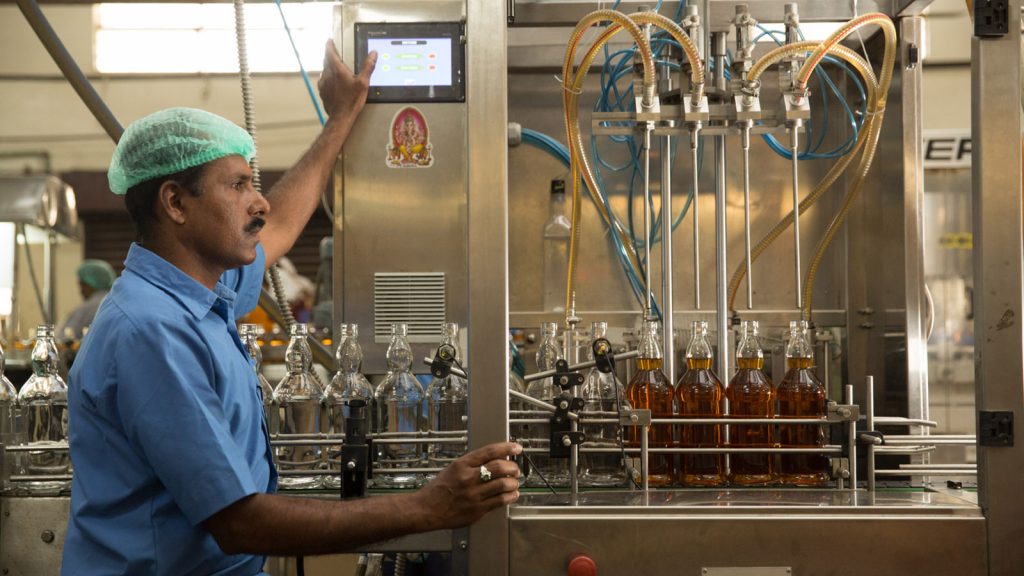 A worker operates the bottling line at Amrut Distillery.

Perhaps the most exciting thing about Indian whisky is its vast potential. Amrut, Paul John, and Rampur are the vanguard, but at least a half-dozen other Indian distilleries are already making malt whisky for IMFL. If and when they decide to make the leap to single malts, they will find drinkers primed and eager to embrace their whiskies, both in India and abroad.

The key for any new single malt distillers in India will be adhering to the high voluntary standards that the leaders have set, like aging in oak barrels and not using additives. There is currently little regulation for single malt whisky in India, so the future of the country's single malt is very much in the distillers' hands. If they can commit to building a strong reputation for quality in concert, India will be virtually unstoppable.

It's a future that Kumar anticipates with some trepidation, but also hope. He describes meeting the chairman of Paul John shortly after that distillery's single malt whisky debuted in the UK. “I said to him, I feel now that the onus of responsibility lies on both of us, that we should not spoil the quality, because if you spoil the quality, the name Indian will be spoiled,” he says. “It all depends on how others are following the trends in maintaining the quality, the profile, and the integrity of the product.”

It's early days yet—but growth is inevitable. In fact, Sazerac, which owns Buffalo Trace in Kentucky, recently took a stake in John Distilleries. And there's much more to come. I already enjoyed Indian whisky when drinking it in America. Now, I'm more excited than ever. Like the vermilion bindi conferred by an aunty, India has left its fingerprint on me—and now it's going to make its mark on the rest of the world.
Features Dispatches sbarton Indian Whisky Winter 2017