James Bond enjoys himself a drink. Special agent 007 is a worldly man, and when he's not pouring something neat at the end of a long day, he's using drinks to adapt to the many countries and cultures where he is assigned. While he's best known for ordering Martinis—his “shaken not stirred” line synonymous with the character after all these years—Bond's taste in drinks is far from limited. Over the course of 53 years, 24 films, and 6 actors portraying him, Bond uncorks champagne, sips sherry, and winds down with whisky. In Ian Fleming's original books, Bond actually drinks more scotch and soda than Martinis—with scotch just eclipsing the Martini at a rate of 21 to 19.

The Bond character is discerning and cultured, whatever the setting or spirit. He drinks Mojitos in Havana, sharing his drink with Jinx (Halle Berry), and telling her, “You should try it.” When he's offered saké in Japan, he remarks that he enjoys the beverage, “especially when it's served at the correct temperature: 98.4 degrees Fahrenheit.” His host tells him that, “for a European, you are exceptionally cultivated.” 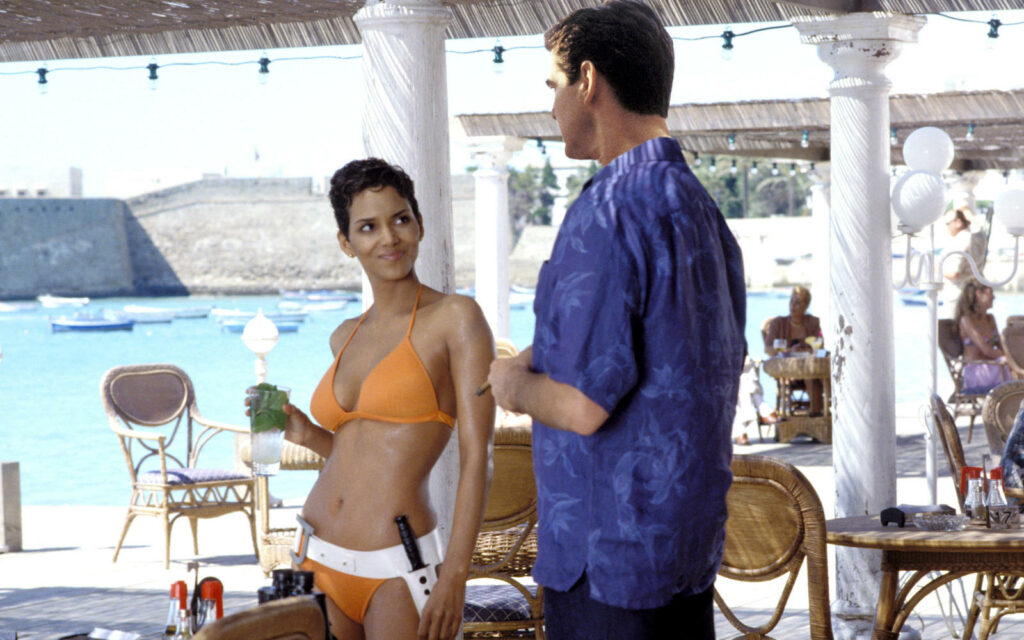 James Bond (Pierce Brosnan) is a man of culture, which often means partaking in local customs and cocktails, as he does in "Die Another Day" (2002), enjoying a Mojito while in Havana, Cuba. (PictureLux / The Hollywood Archive / Alamy Stock Photo)

Simply put, Bond makes drinking look and sound incredibly cool. His taste is exacting, and at times infectious. In the 2006 film “Casino Royale” he orders a Martini with 3 measures of Gordon's gin, one measure of vodka, and a half measure of Kina Lillet—all shaken over ice and served with a thin slice of lemon peel. The drink, known as the Vesper and invented by Fleming in the 1953 book of the same name, sounds so good that three of Bond's fellow card players call for it too.

Initially, Bond was played by Scottish actor Sean Connery, who had several whisky ties of his own. In 2014, Connery starred in an ad for Dewar's in which he advised his younger Bond-playing self to drink blended scotch instead of vodka. Decades earlier, in 1967, Jim Beam hired Connery to play Bond in a series of print advertisements. In one ad, the copy reads, "The taste is distinctive. The man is Sean Connery. The Bourbon is Jim Beam." Connery was also featured in a 1992 ad for Suntory Crest Japanese whisky. Though it aired only in Japan, it served as inspiration for the 2003 film "Lost in Translation" in which Bill Murray is a Suntory pitch man dressed in a tuxedo, very much channeling Bond.

While liquor can sometimes fuel Bond, he has also inspired a number of drinks releases. Bollinger champagne, which frequently pops up in the films, has its own “007 Limited Edition” as does Belvedere vodka, and in September 2020, Blackwell rum announced a 007 Limited Edition to be released in conjunction with the upcoming film “No Time to Die,” which has been repeatedly delayed due to COVID-19 and is now slated for an October 2021 release. Bowmore also has a whisky with ties to James. Black Bowmore DB 1964, which retails for $65,000, was made in conjunction with Aston Martin, which is celebrating the year its DB5 car reached iconic status in the Bond film “Goldfinger.”

Saving the world time and time again is hard work, and who doesn't enjoy a good whisky, cocktail, or glass of bubbly after a long day on the job? Here's a look at some of Bond's most memorable whisky moments.

Talisker appears in both of these films though only briefly, and each time in a scene with M (Judi Dench). In “The World Is Not Enough,” it's only when reaching for ice to put into his scotch that Bond (Pierce Brosnan) realizes a stack of money has been tampered with. In “Die Another Day,” M is shown with a bottle of Talisker on her desk. 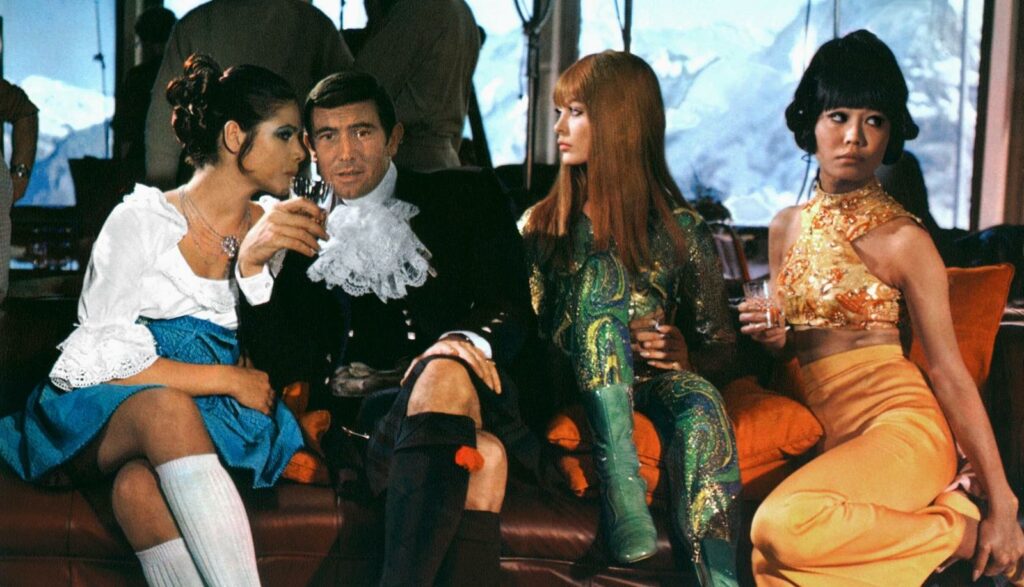 Bond (Daniel Craig) is hiding out in his apartment when Moneypenny (Naomie Harris) pays him a visit. He offers her a drink and though it's hard to see in the dimly lit room, there's a bottle of Macallan 18 on his coffee table. The luxury scotch is a good fit for Bond, and a bit of product placement that is carried over from a previous Craig portrayal (more on this below).

Posing as genealogist Sir Hilary Bray and wearing a kilt no less, Bond (George Lazenby) orders a "malt whisky and branch water, please." Branch water simply means water from a natural stream, so he's ordering some whisky and water, a veteran move for those serious about keeping their palates fresh. Given that Bond is pretending to be someone else, the order makes narrative sense. He's trying to keep his cover and switching up his drink order is a crucial part of that.

Bond (Brosnan) visits M (Dench) in her office for a briefing on the stolen space-based weapons program known as GoldenEye. M offers Bond a drink, to which the agent replies that her predecessor kept a bottle of cognac stashed. "I prefer bourbon. Ice?" M responds. Bond agrees, and we see that M has a bottle of Jack Daniel's on the cabinet behind her desk. Bond finishes the drink and leaves.

It is perhaps an odd choice of whisky for the high-ranking British intelligence officer, but the symbolism is important. It's a clever way of acknowledging that M is being played by a woman for the first time—and one whose style and approach is going to differ from her predecessors. She plans to be forward and direct with her trouble-making special agent, and the Jack Daniel's scene captures that well.

Bond (Connery) frequently travels the globe but "Goldfinger" puts him right in the heart of bourbon country when he follows the namesake villain (Gert Fröbe) to Kentucky. Upon exiting a private plane he remarks, "I believe that the bourbon and branch water's rather splendid here in Kentucky." Later, at Goldfinger's horse ranch, the two men share drinks. "Mint Julep?" Goldfinger asks. "Traditional but satisfying." Bond replies, "Yes, thanks. Sour mash but not too sweet, please." As they talk, Goldfinger asks, "The Julep tart enough for you?" 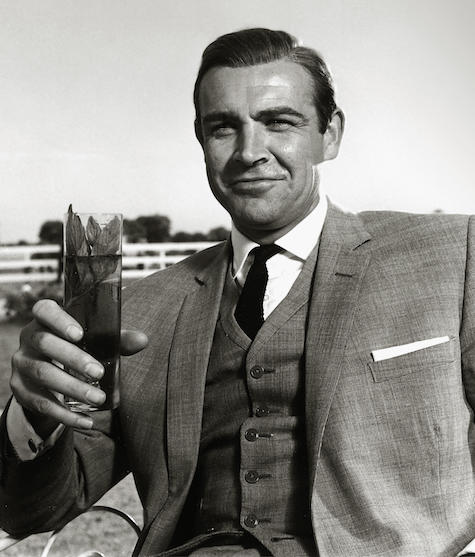 While visiting Kentucky in "Goldfinger" (1964), it's only right that James Bond (Sean Connery) enjoys a Mint Julep. Always with exacting taste, he requests sour mash whiskey for the drink. (PictureLux / The Hollywood Archive / Alamy Stock Photo)

Bond displays both his knowledge of spirits and his ability to adapt to his environment in the scene, which has Goldfinger lay out his grand scheme to the secret agent. The Juleps don't much look like the drink we enjoy today, served in skinny highball glasses and missing the trademark dome of crushed ice but as we've detailed in the past, the drink has undergone many iterations through the years.

While pursuing a case, Bond (Roger Moore) is drawn into the Harlem bar Fillet of Soul. When he enters, he orders a bourbon and water. “Tell him neat, would ya?” he asks. “No ice.” He and CIA agent Leiter (David Hedison) later go to a similar bar, this time in New Orleans, and Bond orders a bourbon with ice once again, before Leiter cuts in. "Two Sazeracs,” he says. “Where's your sense of adventure, James? This is New Orleans. Relax."

This is Moore's first film as Bond, so the bourbon order—which, much like the character's iconic Martini order, comes with specific instructions—could be a way for the actor to put his stamp on the role. The Sazeracs, meanwhile, are a great example of Bond films matching a drink to a place, as the whiskey, absinthe, and bitters cocktail was born on the Bayou.

Meeting Bond (Craig) for the first time, Silva (Javier Bardem) pours a shot of Macallan 1962, places it on the head of Severine (Bérénice Marlohe), and instructs Bond to shoot it off. When he refuses, Silva kills Severine and asks Bond what he has to say to that. “That's a waste of good scotch,” Bond says before engaging Silva's henchmen in a fight.

Using the expensive bottle of scotch to make a point about Bond's mettle is a massive flex by Silva, but the inclusion of Macallan has added significance as a reference to the first-ever Bond film, “Dr. No,” which premiered in 1962. Craig, Bardem, and Marlohe all signed a bottle of Macallan 1962 which was auctioned by Sotheby's in 2013, raising £9,635 for charity.

James Bond Enjoys a Good Smoke Too, As Our Friends at Cigar Aficionado Well Know