For likely as long as whisky has existed, people have enjoyed it to the accompaniment of great music. Whisky has inspired its fair share of songs too, with numerous artists weaving it into their work. Now some musicians are taking it even further, integrating their art straight into the bottle. Blackened might be the most well-known of the moment, aged to the thump of Metallica's oeuvre, but many other whiskies now boast a musician's endorsement—and in some cases, their heavy involvement.

The experience of enjoying whisky and music together inspired DJ and producer TommyD to create his own brand, a single grain whisky called 8O8. “Alcohol and music have gone hand-in-hand for centuries—there's nothing new about this,” he says. “So it's not an unreasonable connection to make. Music is intrinsically part of the 8O8 whisky DNA.” Inspired by the TR-808 drum machine commonly used in electronic dance music, 8O8 whisky caters to the dance music crowd, particularly younger whisky drinkers whom TommyD felt were underserved by other brands. “I was thinking at the time, ‘Where is the whisky for my funky, sexy kind of world I inhabit with nightclubs, festivals, DJs, electronic dance music, hip-hop, house music, drum n' bass, and grime?'” So he set out to fill the void by creating a whisky catering to dance music culture—and that meant selecting something light and easy-drinking. “We couldn't just take a blended malt whiskey and stick it in a bottle, put some fancy stuff on it and make people think it was different,” TommyD says. “It had to start with the liquid, which needed to be more club- and festival-oriented.” 808 is a 40% ABV single grain scotch, ideal for mixing or drinking on ice. 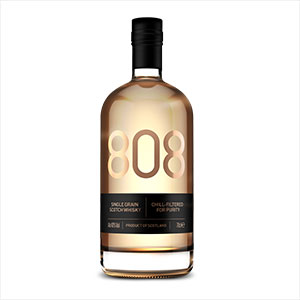 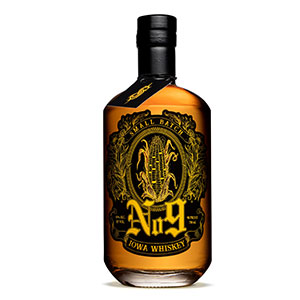 The creators of Slipknot No. 9 similarly wanted to make a whiskey that catered to fans of the heavy metal band—and that meant going beyond just slapping its name on a label. “There certainly is an opportunity when you're working with a celebrity to take shortcuts and put an inferior product in the package because the brand alone will sell it,” says Murphy Quint, head distiller at Iowa's Cedar Ridge Distillery, where the whiskey is made. “We really wanted to avoid that. Slipknot is so authentic, and we didn't want to just rely on that. We wanted to create a whiskey that is also real and also authentic to hold up to what their brand is.”

The robust flavor of Slipknot No. 9 is part of that effort, the result of a blending process that combines 60% bourbon and 40% rye whiskeys. It's a deliberate departure from Cedar Ridge's own style. “The blending makes it unique, but more importantly, we wanted to do it differently than what we've done in the past; with the Cedar Ridge [brand], we have an approachable, not aggressive whiskey,” Quint explains. “We didn't want to do that with Slipknot because it can't be this metal band that is so bold and loud that then releases this approachable whiskey. So that's where the rye came in. Rather than just doing a bourbon…we wanted rye in there to bolden it up and add some spice. So it's a full, loud whiskey.”

Elsewhere, whiskey and music share such commonalities that their combination seems inevitable. “The histories of blues and bourbon are not clean and sanitized—they reflect the uniquely American mix of suffering, hope, hard work, and innovation that are at the core of who we are,” says Ari Sussman, head blender for Three Chord bourbon. “But they're also about the truth and applying a personal stamp on traditional forms. Ultimately, with blues and whiskey, they're only good if they're honest and authentic. You can't fake the blues and you can't fake good whiskey.” 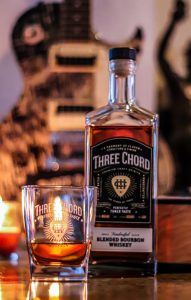 Three Chord bourbon is made in partnership with musician and producer Neil Giraldo.

A winemaker and distiller, formerly of Michigan's Ann Arbor Distilling Co., Sussman was experimenting with blending and finishing a variety of whiskies when he met Neil Giraldo, the co-founder of Three Chord and longtime musician, songwriter, and producer for Pat Benatar (who's also his wife), among others. “I told him that I think we've only begun to see how creative and expressive the blending process can be,” Sussman says. “There is a lot of good whiskey out there and there's a way of making it more interesting and compelling through blending. That resonated with Neil because he saw parallels to his process of writing, playing, and producing music.”

Three Chord bourbon debuted in 2018 with unusual production methods. After blending sourced whiskeys, Sussman employs a process called pyrolysis. He dumps the barrels and disassembles them, roasting the staves to different temperatures, then putting them back into a tank holding the whiskey. “We found that we could change the character of the whiskey in a predictable way,” he explains. “Over time we were able to identify compounds, like vanillin, and how to coax it out of the wood using heat. We also found that we could expedite the release of those compounds into the whiskey via our process of ‘rhythmic disruption' [a proprietary process of moving liquid in and out of the wood that does not involve music]. In a way, we're just using more of the barrel to create a profile that we enjoy. It's more work, but we think it's worth it.”

Giraldo is heavily involved with Three Chord Bourbon's operations, and of course music is his muse. “Like writing a song, it starts with an inspiration,” he says. “From clear liquid to rich brown—bourbon to the palate—ears to the song. There is definitely a correlation between music and spirits—from the creative to the finished product. I believe it starts with our name, Three Chord Bourbon, and the mantra that serves all musicians: ‘Three chords and the truth—equal portions of passion, commitment, and integrity.'”

TommyD compares the entire development of a whisky, from fermentation to distillation to maturation, to the “magic” of music creation. “You put your hand on a D chord that you've put your hand on a million times and you strum it, and every time you strum it, it comes out slightly different than the last time,” he says. “That's the similarity between music and whisky. You never quite know what you're going to get. You can follow all the rules, but there are no rules when it comes to whisky and music.”

Backstage Southern Whiskey
Earning its name from country star Darius Rucker, who traditionally gives a backstage toast with bandmates before every show, this Southern-bred brand includes rye whiskey and two flavored variants. First released in Rucker's home state of South Carolina, the whiskey is currently available in Kentucky, Georgia, and Tennessee, with plans to expand nationwide.

Blackened American Whiskey
Created by the late master distiller Dave Pickerell in collaboration with Metallica, this blend of American whiskeys is finished in brandy barrels. During the finishing process, low-hertz soundwaves from Metallica's music are pumped through the barrels to enhance molecular reactions taking place between the wood and the whiskey. Each batch “hears” a new playlist.

Dusko Fine Whiskey
The story of Dusko began with executive producer Damon Dash's recording of the album “BlakRoc.” While in the studio, the drink of choice was whiskey. Dash was inspired to create a whiskey distinct from other brands, which led him to Spain, where Dusko Fine Whiskey is distilled, blended, and bottled after aging a minimum of three years in sherry butts and puncheons.

Heaven's Door
Together with Marc Bushala, a founding partner in Angel's Envy, Bob Dylan launched this brand in 2008 with a straight rye, Tennessee bourbon, and Double Barrel whiskey, a blend of three whiskeys from Tennessee finished in toasted oak barrels. Since then, limited editions like a 10 year old bourbon and 26 year old mizunara cask-finished Canadian whisky have debuted, and the brand has announced plans to open a distillery in Nashville. The name comes from a Dylan song, and the label features ironwork designs crafted by Dylan himself.

RockFilter Dessa's Hand Shadow Rye
This limited-edition rye whiskey is a collaboration between Spring Grove, Minnesota's RockFilter Distillery and musician Dessa. Featuring a mashbill of locally grown organic rye, triticale, and corn, the whiskey was aged in 15-gallon white oak barrels and finished in ruby port casks. The name was drawn from a lyric in the title song of Dessa's album “Sound the Bells.”

Virginia Black Whiskey
A collaboration between entrepreneur Brent Hocking and Canadian musician Drake, this whisky is from neither its namesake state nor Drake's home, Canada, but rather sourced from MGP Distillery. A decanter-style bottle holds the American whiskey, a blend of 2, 3, and 4 year old bourbons. For his part, Drake has referenced the whiskey on record and starred alongside his father in promotional spots.