Japanese food has long found a partner in whisky, and now one of the leading Japanese chefs is taking it one step further, putting his touch on a new offering from Rogue Ales & Spirits. Masaharu Morimoto—best-known for competing on the Japanese TV show “Iron Chef” before starring in Food Network's “Iron Chef America” in 1999—has teamed up with the Newport, Oregon distillery to create a limited-edition whiskey that highlights the link between brewing and distilling, and showcases how further experimentation could push the bounds of flavor.

The whiskey grew out of previous collaborations between the chef and distillery. In 2003, Rogue launched the Morimoto Signature Series of beers, which includes an imperial pilsner and Black Obi ale, brewed with barley and buckwheat, the main ingredient in soba noodles. These two beers (minus the hops) became the wash for Morimoto's whiskey; after distillation, the spirit matured in new American oak casks for over two years, resting in Rogue's ocean-adjacent warehouse. The whiskey was then transferred to casks made of Oregon oak and previously used for aging Rolling Thunder imperial stout for an 18-month finish.

Rogue has labeled the whiskey as a single malt, which isn't a regulated term in the U.S.; however, widely accepted definitions of the style preclude the use of any grain but malted barley. Because this expression's mashbill includes buckwheat, Whisky Advocate considers it a malt-based whiskey, rather than single malt.

From Beer to Whiskey

With nearly two decades of successful beer collaborations behind them, Rogue and Morimoto saw whiskey as the next logical step, though Rogue head distiller Jake Holshue acknowledges that distilling whiskey from pilsner and soba ale may not seem like an obvious choice. “There aren't many soba whiskies out there, and pilsner malt is not a common ingredient in single malt whiskies,” he explains. “It's so subtle of an ingredient once it's distilled, and reminds me of how beautiful very light hints of flavor can be in Japanese cuisine.” Pairing the pilsner distillate's “delicate nose” with the Black Obi ale distillate's “roast-y, brown sugar, nutty character” resulted in a “unique blend of…specialty malts that enhance and ultimately drive the character of the washes and the whiskey,” Holshue adds. 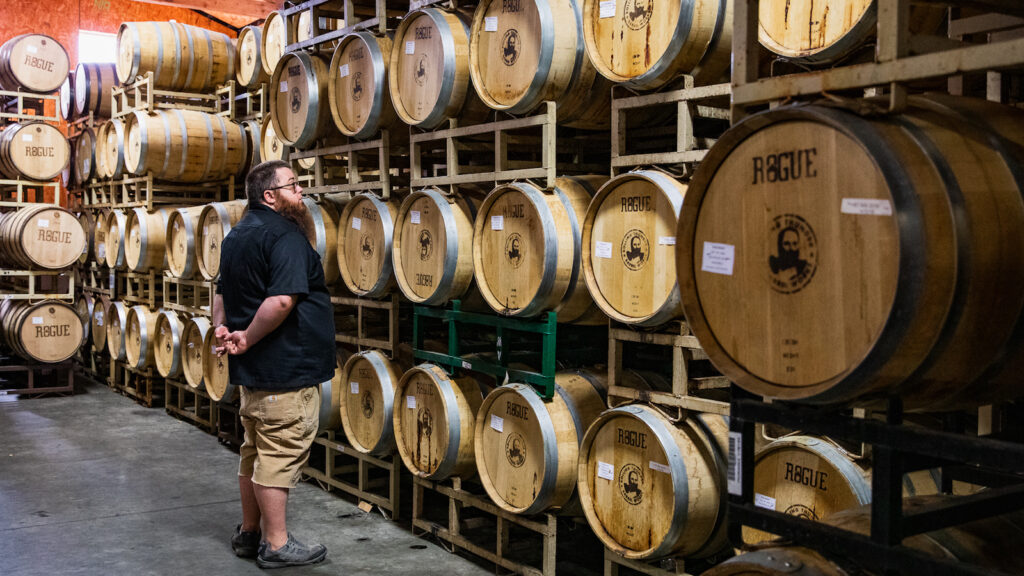 Newport's coastal climate also has an impact on flavor. “There is an attribution of salinity, and some contribution of a small umami content that helps our whiskeys stand out from even some other Oregon whiskeys,” Holshue says. The finishing barrels, meanwhile, are made by Rogue's cooperage from Oregon's Quercus garryana, which Holshue describes as more tannic and with less vanilla than Quercus alba, the white American oak in which bourbon typically ages. “The stout barrel itself adds a lot of cocoa, coffee, and dried fruit [notes],” he adds. “These barrels are subjected to a toasting process as well, which definitely helps build more of a Maillard reaction, so [the whiskey] has a bit of smoke to it.”

There are 942 bottles of the 42.5% ABV Morimoto whiskey available at Morimoto restaurants, Rogue pubs, and retailers across the U.S., priced at $80. The calligraphy on the label—which Morimoto designed himself—means “dream,” a concept the chef originally thought up while celebrating his 60th birthday in 2015, according to Rogue communications and marketing manager Amanda Zessin. It's meant to represent the ambitions and goals Morimoto wishes to pursue in the future, building on the success he's already achieved in the culinary world.

Holshue, meanwhile, has a dream of his own—that the new whiskey could pave the way for further collaboration between distillers and chefs. “I'm a huge fan of chef Morimoto, but never thought in a million years I'd get to work with him,” he says. “I hope that what springs out of this is…new ways to bring this fusion of cooking and distilling to a broad audience, in the same way chef Morimoto has done with his cuisine.”
Food News zkostro Beer Craft Whiskey Celebrity Whisky