In a Los Angeles mansion, hidden behind a façade obscured by bookshelves, is a bank vault door secured by a ten-bolt combination lock. On the eve of Prohibition, the owner of this fine residence amassed a bunker of booze in a secret cellar, filling it with demi-johns of sherry and port, and stockpiling hundreds of pints of whiskey. The vault was one of two belonging to Jean-Baptiste Leonis: merchant, liquor dealer, banker, real estate developer, and founder of the industrial city of Vernon, California. In 2017, Leonis' descendants discovered his Prohibition-era stash, untouched for nearly a century. The find is especially important given the scale, provenance, and condition of the collection, according to the wine department of Christie's auction house, which prepared it for sale in New York on December 7th. 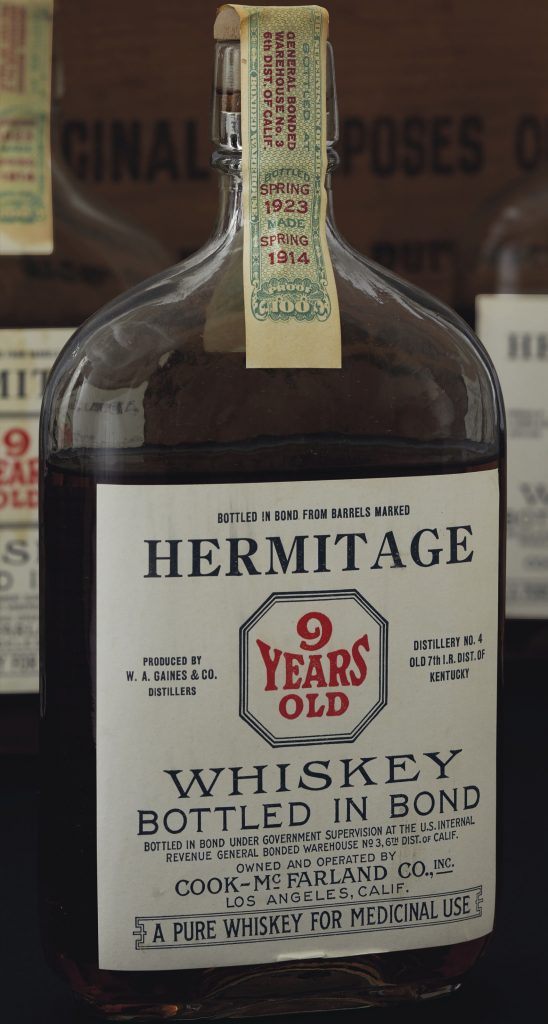 Before the gavel fell, I sat down with Chris Munro, head of the Christie's Americas wine department, over a glass of Hermitage bottled in bond 9 year old whiskey—which was still showing remarkable vibrancy and flavor considering it was produced in 1914 by W.A. Gaines & Co. Distillers of Franklin County, Kentucky. (Note: Hermitage is the name of a demolished Kentucky distillery, with no relationship to the French wine region.) “For Christie's, this is our largest-ever collection of pre-Prohibition whiskeys,” Munro said, explaining that the unusual nature of the find required a certain amount of educated guessing in order to set estimates. “It was virtually impossible to put an estimate on it; we have fifteen full cases of the Hermitage 1914, which we gave an estimate of $7,000-$9,500.”

The opening lot from the J.B. Leonis vault—five quarts of Hermitage Pure Rye Whiskey, distilled in 1908 and bottled eight years later—set the tone for the auction. It sold for more than six times the high estimate—an astonishing $18,000 ($22,050 including buyer's premiums). A single quart bottle of Old Taylor Bottled in Bond distilled in 1911 at the E.H. Taylor Distillery in Frankfort, Kentucky reached more than eight times its high estimate, garnering $4,800 ($5,880) when the gavel fell. Nearly 400 bottles of the Hermitage Bottled in Bond 9 year old from 1914 sold in twenty-four pint lots in banded wooden cases for double the high estimate, achieving a hammer price of up to $22,000 ($26,950) per lot. The price, ranging between $450-$850 per pint, is equivalent to a modern day bottle of 30 year old scotch. 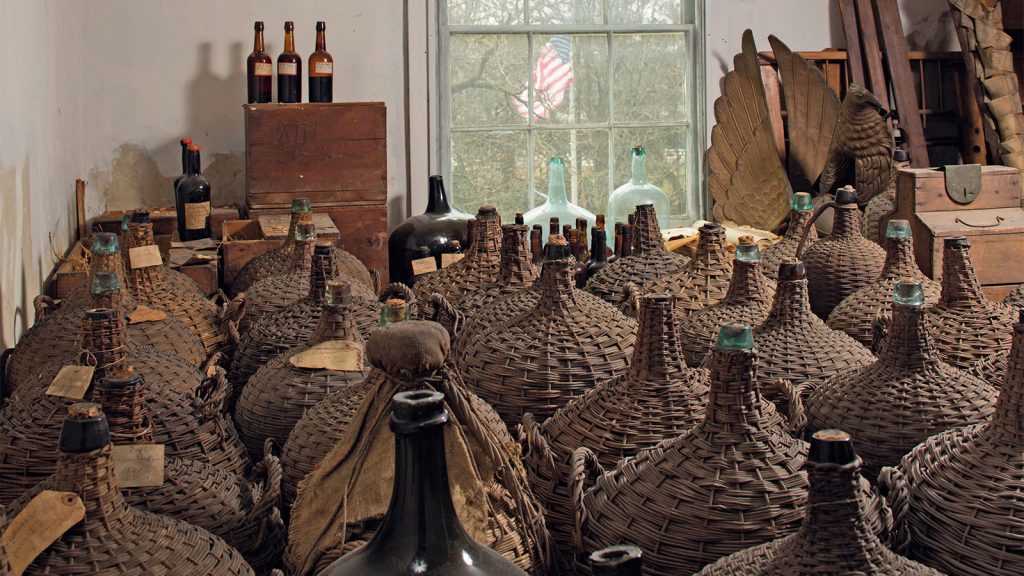 New Jersey's Liberty Hall museum uncovered dozens of demi-johns of madeira and whiskey, which were sold at auction. (Photo courtesy of Christie's)

Another major section of the sale included a collection of 18th- and 19th-century madeira and spirits from the Liberty Hall Museum in New Jersey. During renovation, the extensive collection was discovered hidden behind a wall since Prohibition. “The Liberty Hall collection was just in this attic room; they had no idea what the liquid inside these demi-johns was, and they were thinking of giving them away until they discovered they contained bourbon and madeira,” said Munro. The provenance of the liquids included many of the original invoices. “These are museum-quality pieces: real time capsule stuff,” Munro explained. The star of the show was five gallons of rye whiskey, held in a corked demi-john in a wooden casket stencilled with the trademark “Twoplex” and the year 1876—perhaps a reference to its date of distillation. “It looks like it has come straight from the set of a Western movie!” Munro said. “It's a fascinating piece, with a driven cork, which meant [it was] pretty full and had suffered very little evaporation.” The demi-john of rye sold for a hammer price of $24,000.

The market conditions for this auction could not have been better. Whisky auctions have made headlines around the world this year thanks to some record-breaking bottles of Macallan, with Christie's setting the highest price of all. In addition, the auction aligned with the current fervor for Kentucky bourbon, rye whiskeys, and cocktail culture, and represented one of the gems in Christie's Luxury Week. Buyers from around the world flew in to participate. Christie's reported that the sale, which also included many fine wines, made over $3 million including buyers' premiums, with historic whiskey contributing over $812,000.

With few examples of these whiskeys for taste comparison, it can be safely said that such prices reflect what bidders are willing to pay for an incredible piece of American history, rather than a strictly objective assessment of the liquid's taste. In recent years, specialty whisky and cocktail bars in the U.S., and their suppliers, have been prime purchasers of such bottles, driving up prices as they seek to offer customers rare experiences or recreate authentic vintage cocktails. While pre-Prohibition American whiskey has been collected by enthusiasts for years, their value—as exhibited by the prices set at this auction—is clearly rising.
jmccormick News Auctions Rare Whisky