Its name may not be the most appealing, but the Rusty Nail is an approachable drink, even for those who tend to shy away from using scotch as a base for cocktails. “The sweet honey and heather notes of Drambuie tame the robust flavor of blended scotch to create a slightly sweet and herbal cocktail that finishes with just a hint of peat and smoke,” says Leo de Rivera, head bartender at Red Phone Booth in Atlanta.

The cocktail's exact origins are a bit cloudy, although it certainly didn't exist before the debut of Drambuie—a scotch-based liqueur flavored with honey, spices, and herbs—around the turn of the 20th century. “Most historians point to the British Industries Fair in 1937 for the debut of the combination of scotch whisky and Drambuie,” says Paul Taylor, head bartender at Columbia Room in Washington, D.C. “However, that cocktail—which was dubbed the B.I.F.—contained bitters,” whereas modern iterations of the Rusty Nail do not.

Some attribute the Rusty Nail recipe to bartenders at the 21 Club in New York City, who created a similarly proportioned drink called the B&B that's split between cognac and Bénédictine liqueur, but that's uncertain. What's clear is that the cocktail had been established by the mid-20th century; in the early 1960s, it was endorsed by Gina MacKinnon, the chairwoman of the Drambuie Liqueur Co., and in 1967, a recipe appeared in “Old Mr. Boston De Luxe Official Bartender's Guide.” While that Rusty Nail called for equal parts scotch and Drambuie, today's version tends to be drier. However, with a drink so simple, you can adjust the ratios until you find the combination you like best. “The Rusty Nail is easy to reproduce at home, fantastic to experiment with, and a reliable choice after a meal or with dessert,” Taylor says.

The Rusty Nail traditionally calls for blended scotch to complement the scotch-based Drambuie. “The sweetness and spice of Drambuie push forward notes in the spirit that you would not usually get,” Taylor explains. He suggests Dewar's 12 year old for its stone fruit and fudge notes or Compass Box Great King Street Glasgow Blend for a subtle smokiness.

De Rivera uses Famous Grouse Smoky Black. “It has extra boldness that stands up distinctly against many other flavors and makes everything pop,” he says. “It helps bring out the grassy, herbaceous, and floral notes in Drambuie that can get lost behind its honeyed sweetness without losing the flavor of the scotch.” 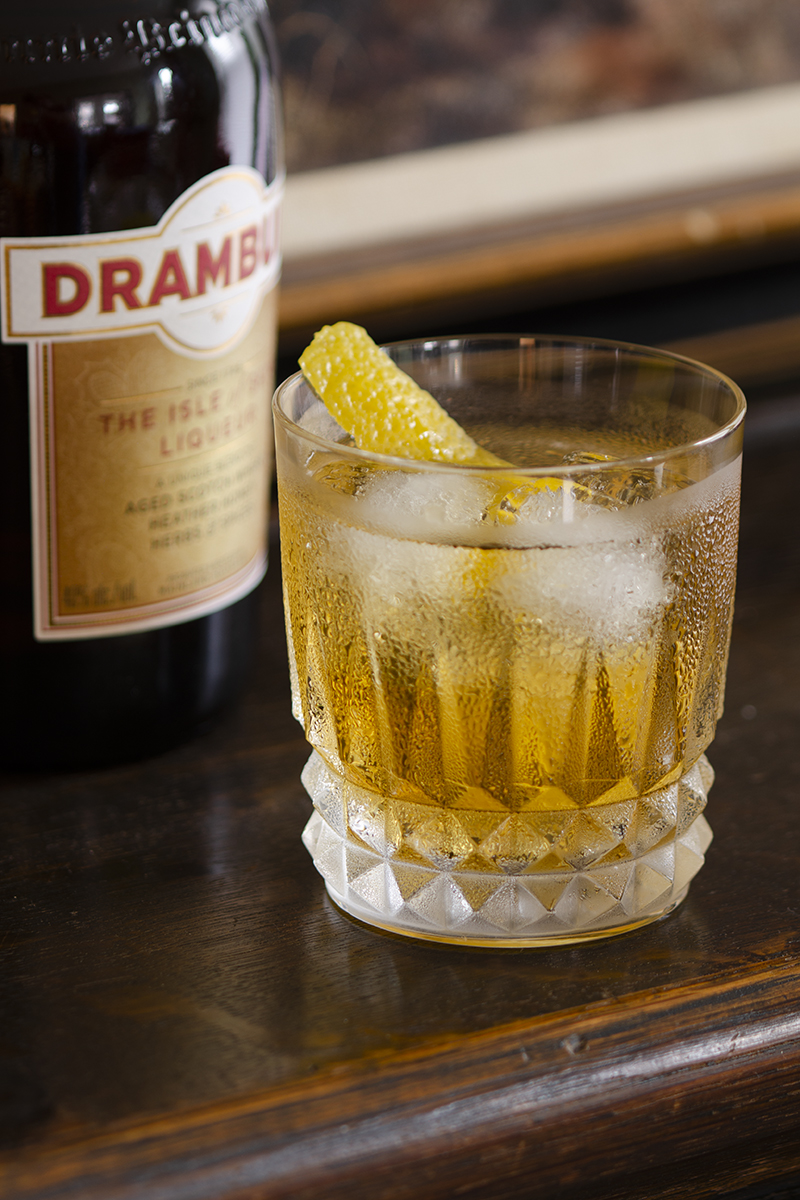 The Rusty Nail is one of the rare whisky cocktails that must be made with a specific ingredient—in this case, Drambuie liqueur.

Add ingredients to a mixing glass and add ice. Stir until chilled, about 15-20 revolutions. Strain over fresh ice in a chilled rocks glass. Express lemon twist and drop into glass.

Chill the Glass
“You want the serving glass to be as cold as possible when you serve it,” says de Rivera, who recommends chilling the rocks glass as you make the cocktail.

Add Ice Second
“I recommend putting the ingredients into a mixing glass first, then adding ice. You won't splash anything off the top of the ice that way,” de Rivera says.

Avoid Over-stirring
While you want the ingredients to be incorporated and chilled, too much stirring will over-dilute the drink. Taylor recommends stirring 15 to 20 times.

Always Strain Over Fresh Ice
Serving a cocktail over fresh ice isn't only about presentation. The ice you mixed with has already started to melt and will continue to do so. Fresh ice will melt too, but more slowly, giving you more time to leisurely sip the drink at its peak.