Scottie Pippen spent part of the pandemic refining his palate. The six-time NBA champion had been acquiring a taste for whisky, sipping Crown Royal when he and his business partner began talking about releasing his own brand. A few days after that initial conversation, Pippen was shaking hands with Napa winemaker Dave Phinney, whose Savage & Cooke distillery opened three years ago on Mare Island in Vallejo, California. The two began discussing what a Scottie Pippen bourbon would look and taste like.

“Scottie jumped in immediately,” Phinney says. “In less than a week, he drove up to the distillery and got to work.” With the help of Savage & Cooke master distiller Jordan Via, the Hall of Fame forward embarked on a whiskey journey that included observing each step of the distillation process and tasting regularly.

“Something that I was willing to do, was to make sure that I did a lot of tastings and found the right bourbon,” Pippen says, noting that he was looking for something that was easy to drink, didn't have any sharp edges to it, and appealed to a wide audience. “After tasting so many different bourbons, you start to find which lane is best for you.”

Phinney says that Pippen and Via spent hours working on blends. The end result is Digits, a 5 year old Tennessee bourbon with a mashbill of 75% corn, 21% rye, and 4% malted barley that is bottled at 46% ABV. “It's been an amazing journey for me, having an opportunity to be around a distillery, be around Savage & Cook,” Pippen says. “It's been wonderful going through a lot of tastings, trying to find something that I felt that I could consider great.” 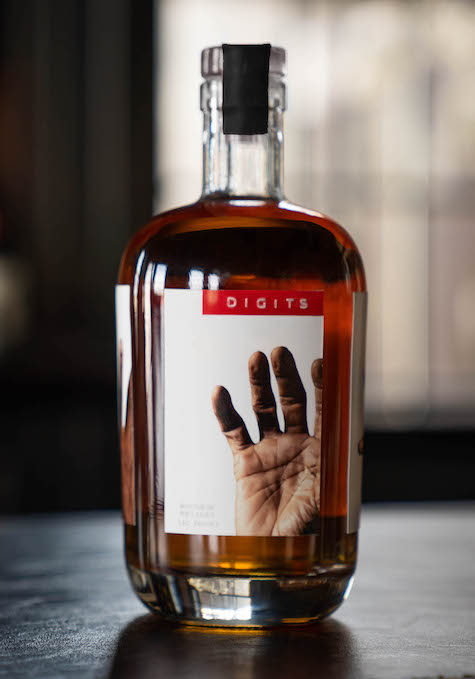 Pippen says Phinney came up with the concept art for Digits after being "mesmerized" by the size of the basketball player's hands.

Though Digits is a sourced whiskey, it still has Pippen's fingerprints all over it, quite literally. The label depicts the basketball player's outsized hands, a concept that Phinney came up with after meeting Pippen in-person and becoming “mesmerized” by his mitts, Pippen says. The name and artwork make thematic sense as well. Whisky drinkers palm a bottle the same way a basketball player would grab a ball, and of course, a pour of whisky can be measured in fingers, or digits.

“Dave is very creative, so he was able to bring the hands, the fingers, really put the whole name behind it,” Pippen says. “I think that his creativity was what's really made this journey so amazing.”

Phinney calls the whole process “a study in egoless collaboration” and says that he and Pippen developed a friendship over the course of working together, pledging commitment to one another from the start. “It's a simple old school tenet, and it is how I choose my friends and my business partners,” Phinney says.

Another strategic choice was to launch the bourbon in Chicago, where Pippen played for more than 10 seasons with the Bulls. With its world-class bar scene and a rich whisky history, Chicago was the perfect setting for a Digits debut, and Pippen says that former teammates Tony Kukoc and Charles Oakley came out to show support.

“I felt that it was a stronghold for me, a place where I started my career, and it will be great to introduce my bourbon to a city that I felt will give me a great response and it gave me an opportunity to get back out and be a part of the community,” Pippen says. “It's great for me to be back in the city.”

In launching Digits, Pippen has been able to engage with whiskey drinkers in a relaxing way, and learn more about the world of spirits in the process. His biggest lesson, though, was discovering just how fun it is to be part of the whiskey world. “I've learned that it's not really work when you're doing something that really you're passionate about and that you really enjoy,” he says. “It sort of reminds me of playing basketball. It's not work if you love it.”

Digits is available in the Chicago area for $70. Pippen says he has no plans to develop additional whiskeys at this time.
tsimmons Bourbon News Sports Celebrity Whisky