Individual States Are Crafting Their Own Whiskey Styles

Members of the Missouri Craft Distillers Guild recently learned how a bill becomes a law—no "Schoolhouse Rock!" cartoon necessary—as they collectively lobbied for House Bill 266. “I'm a distiller; I'm here to make spirits, as are the rest of my peers. We never thought that we'd really get into legislation on the state level,” says David Weglarz, guild president and owner and head distiller of StilL 630 in St. Louis. That involvement proved fruitful however, as on July 11, 2019, Missouri bourbon was legitimized.

“All the distillers in the guild have been working toward calling their reps, traveling to Jefferson City, and really trying hard to get this passed,” Weglarz told Whisky Advocate shortly after. “So we're in a brief moment of celebration as we scramble to try and put down more Missouri bourbon whiskey.”

Missouri bourbon is a legally recognized whiskey style, based on the existing federal rules of bourbon. To be considered bourbon, whiskey must be made from a mash of at least 51% corn, distilled to no more than 80% alcohol by volume (ABV), aged in charred new American oak containers with an entry ABV of no more than 62.5%, and bottled at no less than 40% ABV. To be considered Missouri bourbon it must also be mashed, fermented, distilled, aged, and bottled in the state; aged in oak barrels manufactured in the state; and, beginning January 1, 2020, made with corn exclusively grown in the state.

It's a stringent definition, but one that was crafted by the distillers themselves. We can expect to see more and more subsets like Missouri bourbon, based on geography, process, and/or ingredients, as distillers seek to preserve their identity and points of regional pride.

Don Gosen, owner of Copper Mule Distillery in Hermann, penned the original bill with the goal of tying together Missouri's two biggest industries: agriculture and tourism. “The more I dug into it, the more I saw the competitive advantage Missouri had,” he says.

“I think everybody right now is looking toward innovation and uniqueness,” says Mark Shilling, former president of the American Craft Distillers Association. “How can they create or refine something that's different from what everybody else is doing out there, and create their own unique identity?” For Weglarz, Gosen, and others, the answer is in state designations.

Kentucky bourbon and Tennessee whiskey are among the most recognized state whiskey designations. These examples embody the purpose of such specifications: to protect provenance and to delineate process. Kentucky bourbon, as detailed in state law KRS 244.370, is whiskey that must be fully produced in Kentucky and aged in new charred oak barrels for not less than 1 full year. (Bourbon has no legal aging requirement.) Tennessee whiskey, a variant of bourbon, applies the same requirements for state production, additionally requiring the Lincoln County Process of maple charcoal filtration prior to aging. In 2013, Jack Daniel's led a charge that resulted in House Bill 1084, which established the guidelines for the style. 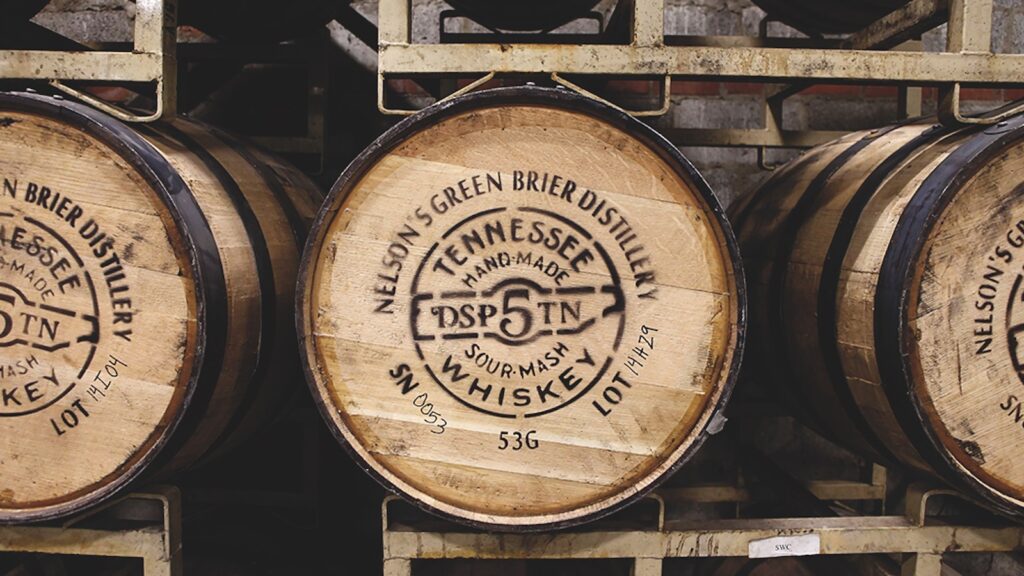 The quest to require charcoal filtration of Tennessee whiskey may have resulted partially from the loosening of other regulations that constrained distilling in the state. In 2009 distillation was expanded from just three counties to an additional 41. “You saw this explosion of people out pursuing distilled spirits plants permits from the state of Tennessee,” says Jeff Arnett, master distiller at Jack Daniel Distillery since 2008. “So in a few short years we have gone from three distilleries now, I think, up to 40, or at least people who are permitted.”

With the Tennessee distilling scene growing ever more robust, Jack Daniel sought to ensure that Tennessee whiskey would remain synonymous with the charcoal mellowing process used by them and others in the state. “The objective of having the Tennessee whiskey law was to preserve history, but also to provide some level of, I call it a consumer protection,” Arnett says. “That if those words were to appear on a label, then you would know something about how it was made.”

Today, Tennessee whiskeys on the market include those from Jack Daniel, George Dickel, Nelson's Green Brier, Tenn South, and Short Mountain, with more currently in production. (Incidentally, Prichard's won a reprieve from the charcoal filtering requirement for their Tennessee whiskey on the basis of familial precedent.)

“The whole reason why my brother and my dad and I brought our family's distillery back to life was in order to make Tennessee whiskey,” Nelson says, calling Charles a pioneer of the style. “They used the category of Tennessee whiskey to differentiate themselves from other products out there. And back then, there was a lot of folks selling products that were not necessarily exactly what they said they were.”

In contrast to the Tennessee whiskey movement, a legal appeal led by the world's largest American whiskey brand, New York's Empire Rye resulted from a grassroots movement of craft distillers.

The 2007 Farm Distillery Act resulted in a New York distilling boom, allowing tastings and on-premise sales so long as at least one product included 75% New York-grown grains. As of 2017, New York had 123 craft distilleries, according to the American Craft Spirits Association, second only to California. 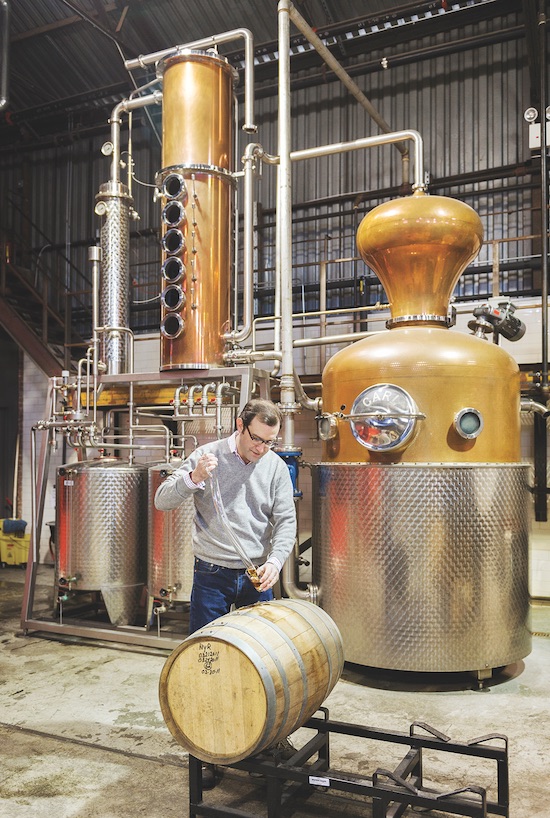 Allen Katz of New York Distilling Co. was among the group of distillers who created the Empire Rye category in 2015.

New York Distilling Co. distiller and owner Allen Katz helped formulate the Empire Rye guidelines in 2015 along with Christopher Briar Williams of Coppersea Distilling and others, with the aim of creating a wholly new style of whiskey unique to their state.

“There was this early conversation: ‘Who are we to say what the New York style is?'” Williams says of that initial meeting at a craft distillers' conference in Denver. “And what we realized is, well, we're the distilling industry. Who else would say what the whiskey style of New York [is] except the people who make whiskey?”

Empire rye builds upon the 75% grain provision, and the legal requirements for rye, adding to it that the whiskey must be mashed, fermented, distilled, barreled, and aged at a single New York state distillery; and aged for a minimum of 2 years in new charred oak barrels, with a maximum barrel entry proof of 115.

“The intent was actually to create a new whiskey style from whole cloth,” Williams says. “It's another opportunity to promote agriculture, general culture, and cocktail culture from a historic and modern standpoint from New York state,” Katz adds, noting a belief that there is something specific about the quality of rye from the Northeast.

As for seeking a legislative seal, both distillers welcome the boost but neither finds it necessary. “I think the excitement and the cooperation among the distillers has been such that we never really felt like we have to pursue that,” Williams says. All Empire ryes do bear a seal of approval, however, as certified by the Empire Rye Whiskey Association.

Four years after its creation, 10 distilleries now produce Empire rye by working within the parameters, like choosing to use malted or unmalted rye or combining the two, for distinction. “It provides a great leeway for variety and creativity and I think that meets a wonderful tenet of modern consumerism,” Katz says. According to Williams, by 2022 there could be as many as 27 distilleries across the state producing the style.

The spirit of community and collaboration is thriving in Texas as well, where distillers have formed the Texas Whisky Association (TXWA). Separate from the Texas Distilled Spirits Association, the organization is promoting transparency with regard to production, labeling whiskeys as Texas certified when they qualify.

“It's important that people understand, without having to flip over the back of the bottle and read fine print and understand the laws around things that yeah, this was actually made here,” says Spencer Whelan, executive director of the TXWA and CEO of the Texas Whiskey Trail.

For a whiskey to be Texas-certified, it must be mashed, fermented, distilled, aged, and bottled all within the state of Texas. The grains can be grown elsewhere, but all production processes must occur in-state. “There's a lot of really well-intentioned people excited to be supporting local spirits and they're mistaken about what they think that currently means,” says Jared Himstedt, TXWA president and head distiller at Balcones. “They're not supporting what they think they are.”

Whelan says that the association is focusing on consumer education through the Texas Whiskey Trail rather than legislative action, and that the state's size, with its wide range of climates and conditions, doesn't lend itself to a single style of whiskey. “We're having the chance to connect in a really unmediated, very direct, involved way with some of the most excited and supportive parts of the community in Texas,” Himstedt says. “I think we're just beginning to see the glimpses of what's going to be possible. There's a really intense interaction and collaboration: the producers with each other and now producers with the trail members.”

There are currently 12 members of the association, with three more joining. Last year, 2019, saw the first-ever blended Texas whiskey, a collaboration between Balcones, Andalusia Whisky Company, and Ironroot Republic. A distillery does not have to be a member of the TXWA to have a product certified by it.

While the terms of these state designations can differ dramatically, there are two undeniable conditions that have fostered their creation: state laws that benefit craft distilling and a sense of community or continuity among the distillers there. What's more, the distillers display an acute knowledge of their home turf. In Missouri, the guidelines capitalize on geographic advantage by specifying barrel sourcing, since the state has the largest forest of white oak trees in the country. The rule creates a qualifier that other states would struggle to adopt. Gosen notes the bill promotes local commerce and received support from the Missouri Forest Products Association and the Missouri Corn Growers. 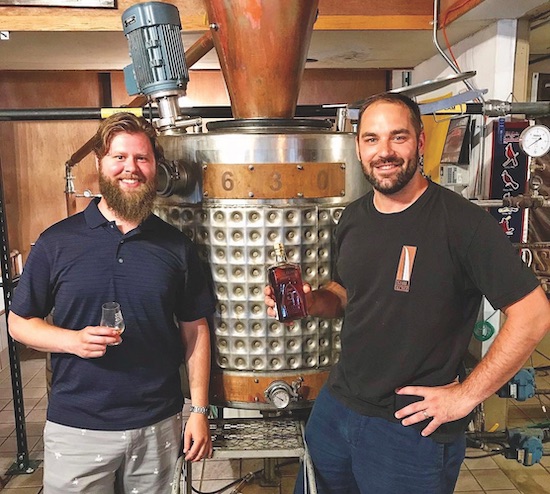 David Weglarz, right, owner and head distiller of StilL 630 in St. Louis, played a pivotal role in the creation of Missouri bourbon as a style.

Other distillers are seeking to create style guidelines that transcend state lines, namely proponents of American single malt. The effort to define single malt in the U.S., which currently has no legal protection, has brought together numerous craft distillers across the country.

The American Single Malt Whiskey Commission currently has over 150 members. A formal petition to define the style—made from 100% malted barley, distilled at a single distillery, made and aged in the U.S.—has been under review by the Alcohol and Tobacco Tax and Trade Bureau for more than a year.

The most progressive craft distilling states remain at the forefront of pursuing regional or state styles. Chris Montana, former president of the American Craft Distillers Association and owner of Du Nord Craft Spirits in Minneapolis, notes the craft landscape can vary wildly from state to state. “It's indicative of the progress in the industry that there are states who are at the point where they can move on things like state-specific designations and some of those origin-based laws. That's a good thing, and ultimately I'd like us all to get to that point,” he says. The fact remains, however, that for distillers in certain states, simply opening up a cocktail room or selling their whiskey on-premise remains the more immediate concern. “Unfortunately, it's a hodgepodge of 50 different states of laws and a lot of them are still pretty unfriendly to distilleries,” says Montana. Which is to say, there may never be 50 different styles of bourbon or rye, but where distillers can make a name for themselves, they're using their states to do so.

“I think other states will probably follow suit as they try to determine what would be unique to their state,” Shilling says. “I think we will see more specific requirements; whether or not they become legislated or just something that is internally governed by a nonprofit or affiliated group of distillers remains to be seen.”
tsimmons Features Dispatches American Whiskey Winter 2019