For a spirit to be considered whisky, it must meet a few basic requirements, among them that it can be bottled at no less than 40% alcohol by volume (ABV). This presents a challenge for scotch whisky makers aging stocks for extended periods, as the temperate climate of Scotland causes proof to decrease over time. By contrast, the hot, humid summers of Kentucky, Tennessee, and elsewhere in the U.S. cause proof to increase over time as the barrels lose more water than alcohol.

However, nothing in whisky is an absolute, and barrels aging in the U.S. can sometimes see their ABVs decline. While checking samples for George Dickel's single barrel program, Cascade Hollow general manager and distiller Nicole Austin discovered just that—as barrels that had been aging on the lower, cooler tiers of the rickhouse clocked in at 39.9% ABV. Rather than blending them away with higher-proof stocks, she decided to bottle them as the newest Cascade Moon release: a 15 year old Barrel Proof.

“I remember going on scotch whisky distillery tours and they would point to these super old dusty barrels in the corner and say, ‘That's not even whisky anymore. Because it's so low proof.' And I just thought that was so intriguing and always wanted to taste it,” Austin recalls. “I assume there are other people who share that curiosity. So, this is my way of showing them.”

Whereas Austin must consider the storied legacy of the Dickel name when crafting those whiskeys, the Cascade Moon series is a playground for her to experiment, explore, and showcase the range of spirits she's producing in Tullahoma, some of which wouldn't fit in more traditional lineups.

“I think there's an awesome place in the world for just a reliable, fairly priced everyday spirit. And that's really hard to do, but we're more than that,” she says. “We can also do many other things and that's part of the conversation with Cascade Moon.” 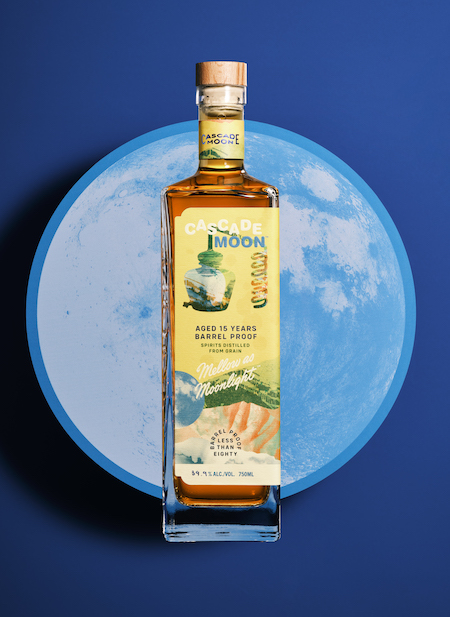 Barrel proof bourbons with ABVs in the 60% range are prized by whiskey lovers who value uncut and unfiltered products. By contrast, whiskies bottled at the lower end of the spectrum are generally considered more palatable options for beginners. With the release of 15 year old Barrel Proof, which is technically considered a Spirit Distilled from Grain, Austin hopes to not only release something that's universally approachable but also to challenge the notion that high-proof spirits are inherently more complex.

“I've always been, I guess, a little bit defiant, a little bit questioning, a little bit of a challenging person. But out of love,” Austin says, noting that the more time she's spent making whiskey, the more she believes in promoting joy and not judgment. “The best outcome for this whiskey would be to start hopefully swinging the pendulum back in the other direction, not so much in seeking low proof, but just in helping people step away from some of the dogmatic approach to whiskey.”

Unlike most 40% ABV whiskies, this new Cascade Moon release is bottled at barrel proof and bears a 15 year age statement. “This is the natural whiskey as it exists,” Austin says. “I wasn't really intending it for low ABV cocktails or something. I was more intending it just to be a point of interest, a conversation, hopefully to surprise people in what they thought was true.” An early taste reveals buttered popcorn, banana bread, and lemon wafers on the nose; with a peppery, slightly bitter palate of hay and peanut shells.

At $125, Austin recognizes the barrier to entry may be high for some, but says that is the nature of releasing rare spirits in small quantities. Previous Cascade Moon releases have included Edition No. 1 (88 points), which was inspired by gose-style beer; Edition No. 2 (92 points), which honored 150 years of George Dickel; and more recently, a 13 year old Indiana-made rye whiskey (88 points).

After Edition No. 2, Austin decided to drop the numerical ordering of the Cascade Moon releases. While she was honored that some were starting to collect the series, she recognized that the numbers might foster the sort of competitive purchasing that she hopes to discourage. (She also regrets that those whiskeys weren't more widely available, as they were distributed to only three states—Texas, California, and Tennessee). And as is the nature of these experiments, she says that not all of them come out as planned or in chronological order.

“I learned really quickly that they don't all work and they certainly don't all work on the schedule that I think that they will,” she says. “I didn't want to be beholden to releasing things in a particular order. I just wanted to be able to make decisions on quality alone.”

The Path to Whisky of the Year: Nicole Austin on George Dickel 13 year old Bottled in Bond