Some filmmakers seem to have a special penchant for whisky, using it over and over again in character development and during crucial plot points. Quentin Tarantino films are characterized by their snappy dialogue, reverence for bygone cinematic eras, and graphic violence, but just there within the frame is another frequent theme: whisky. Sometimes it's a subtle reference, and other times it plays a key role in the action, but when whisky shows up in Tarantino's movies, it's always with purpose. (Warning: Spoilers ahead.)

What you drink is part of who you are, and Tarantino uses this idea to tell us about his characters. For example, in “Inglourious Basterds,” General Ed Fenech (Mike Myers) isn't a major presence, but one detail we learn is that his drink is “Whiskey, straight. No junk in it.” His drink style reflects his commanding style: to the point with no dilution.

Beyond whisky, characters reveal key traits through their drinking habits. Ordell (Samuel L. Jackson) drinks Screwdrivers throughout “Jackie Brown;” the simple cocktail of vodka and orange juice shows a man who uses sweetness to cover his hard edge. In “Once Upon a Time... in Hollywood,” Cliff Booth (Brad Pitt) drinks Bloody Marys—an apt choice for a stuntman who's often bloodied himself. There's even something to be said about the way someone makes their cocktails: Budd's (Michael Madsen) Margarita in “Kill Bill Vol. 2” is every bit as sloppy as he is. 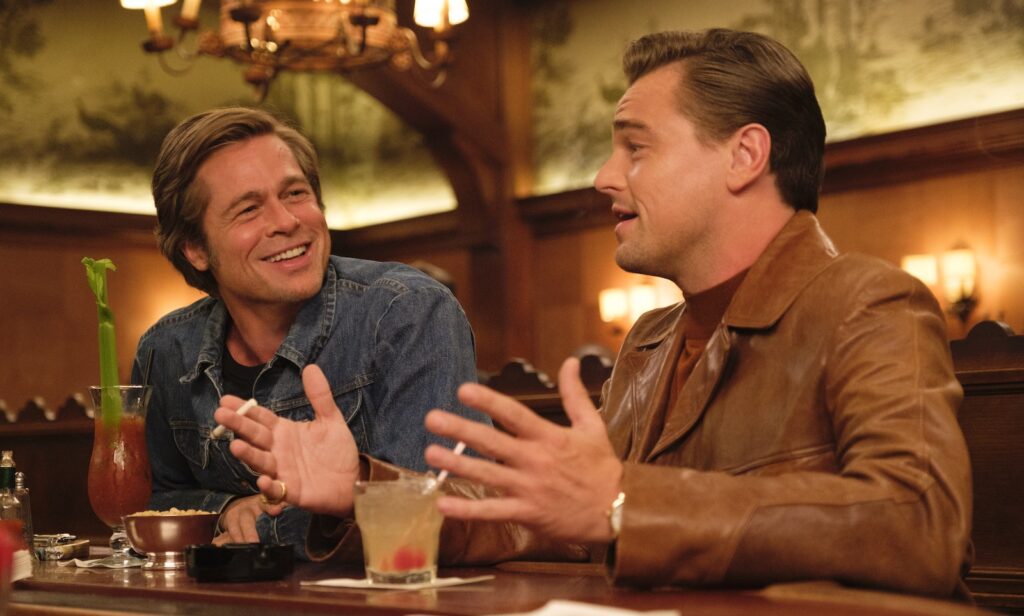 Tarantino reveals character traits of Cliff Booth and Rick Dalton through the cocktails that they frequently drink.

Tarantino's characters most often drink right before chaos ensues. That sloppy Margarita comes just prior to Budd's untimely demise. Major Warren (Jackson) takes a brandy break in between shooting General Smithers (Bruce Dern) and the climactic fight of “The Hateful Eight.” Joe Cabot (Lawrence Tierney) sips Rémy Martin cognac with both Mr. White (Harvey Keitel) and Mr. Blonde (Madsen) as he details the bloody heist about to occur in “Reservoir Dogs.” In “Pulp Fiction,” Mia (Uma Thurman) invites Vincent (John Travolta) inside for one more drink before she makes a potentially deadly mistake. The time for a drink comes just before the time for violence. Tarantino, like his characters, takes a beat before the guns blaze.

It all amounts to this: What you drink is a piece of your story. And whisky has been one of many through lines within the stories that Tarantino tells. The reasons for this aren't clear; Tarantino has rarely discussed whisky or its use in his films, but he undeniably has an affinity for drinking culture. His music supervisor Mary Ramos told Variety that “Once Upon a Time…In Hollywood” is “a love letter to cocktails,” and in describing a bar scene from “Death Proof,” Eli Roth details the director's commitment to accurately capturing Irish Car Bomb shots and the drunken antics that ensued. There is also the fact that Tarantino hails from Tennessee, rich with a whiskey history of its own, and frequently shows those roots: In “Inglourious Basterds,” Lt. Aldo Raine (Pitt) references bootlegging and making "moonshine liquor" in his native Tennessee.

In an archival interview from the early 1980s published to The New Beverly Cinema website in early 2020, a personal anecdote from Tarantino reveals a telling bit of insight into his relationship with whisky: “At the beginning of ‘95, before the Academy Awards, I was taken duck hunting by John Milius, Steven Spielberg, and Robert Zemeckis. John and I sat in a duck blind all day, sipping whiskey out of a flask, talking about movies and shooting the tail feathers off of ducks.” Duck hunting is a far cry from the outrageous violence of most Tarantino films, but it seems that even in his real life, the whisky and the action go together.

Tarantino's lengthy Western doesn't have direct whisky references, but there's one tiny innuendo. Early on, when John Ruth (Kurt Russell) and company arrive at Minnie's Haberdashery, they warm themselves with some coffee. “Do you want a lil' snakebite in your coffee?” Ruth asks his prisoner. She nods, and he pours liquid from an unlabeled bottle into her cup. This could very well be whisky; after all, it is 1877 Wyoming. The bottle's lack of a label, though, implies not whisky, but something less legal: moonshine. Considering an actual snake bite appears in “Kill Bill: Vol. 2,” it seems an intentional Easter egg from Tarantino. —Sam Stone

When Django (Jamie Foxx) and Dr. Schultz (Christoph Waltz) first meet Calvin Candie (DiCaprio), Candie's lawyer, Mr. Moguy (Dennis Christopher), escorts Django to the bar. “Get freeman Django here whatever he wants and I'll have sweet tea and bourbon," the lawyer says. Joining them later on, Candie orders a Polynesian Pearl Diver, an aptly cumbersome drink for the fanciful man. The first advertisement for bourbon whiskey appeared in 1821, so Moguy's order fits in historically, but Candie's is perplexing: The rum-based tiki drink didn't exist until the 1930s. Tarantino often plays fast and loose with historic events, so we'll mark this one up to artistic license. —Ted Simmons

It should come as no surprise that in "Django Unchained," drink orders appear shortly before a violent sequence—both Tarantino hallmarks.

There's a bottle of Bushmills on the filing cabinet in Max Cherry's (Robert Forster) office, but the real whisky moment comes earlier in the film. Louis (Robert De Niro) drinks an unidentified whisky at Ordell's apartment, a hearty pour over ice, resting his glass on the coffee table. The whisky glass is shot alongside Melanie's (Bridget Fonda) feet, among the many reference points for the theory that Tarantino has a thing for feet. The juxtaposition here causes Louis to move his glass—and leads us to consider what Tarantino is saying about the things he finds intoxicating. —Ted Simmons

The movie that cemented Tarantino's status as the next big director in filmmaking, “Pulp Fiction” has two explicit whisky references, both during Mia and Vincent's platonic dinner date. The first comes when Vincent arrives at the Wallace compound. Mia is still getting ready and tells Vincent to make himself a drink. He pours a few fingers of McCleary blended scotch, a fictional brand. (You'd think that Marsellus [Ving Rhames], kingpin that he is, would have nicer stuff on his bar.)

Later, at Jack Rabbit Slims, Mia orders a $5 dollar milkshake. "You don't put bourbon in it or nothing?” Vincent incredulously asks the waiter, Steve Buscemi dressed as Buddy Holly. When they return later and Mia makes her regretful mistake, the glass of whisky from before is still on the table, always in frame. —Ted Simmons

Perhaps the most overlooked of Tarantino's movies, “Death Proof” features a good deal of whisky and even more in the way of cocktails and other drinks. An early bar scene in Texas features pours or mentions of Chartreuse, Long Island Iced Teas, a Bombay Sapphire Gin and Tonic, and a virgin Piña Colada, ordered by Stuntman Mike (Kurt Russell), who says that he's a teetotaler.

At the same bar, Jungle Julia (Sydney Tamiia Poitier) orders a round. “Warren! Six shots of Wild Turkey." There's an overhead view of the drinks being poured, then a close-up of the bottle. “Death Proof” is meant to mimic the exploitation films of the 1970s, low-quality B-movies that cashed in on current trends, and this gratuitous product placement—what could have been used to help finance the film—adds to the overt cheesiness of it all.

When the movie jumps 14 months, relocating to Tennessee, there's another whiskey cameo. Wounded, Stuntman Mike pulls off onto a dirt road and reaches for a bottle of Four Roses in his glove compartment. He takes a swig, then pours some on his arm. He takes another swig but spits it out as the second group of women come back and rear end him. Whatever happened to being a teetotaler? The whiskey appears just before Stuntman Mike receives an overdue beating, but the brand could be a subtle reference to the women he terrorizes in the film, both groups of four, or a callback to one of his previous victims, played by Rose McGowan. —Ted Simmons

Tarantino's latest movie is as stuffed with whisky and cocktails as it is big names. Early in the film, fading TV star Rick Dalton (Leonardo DiCaprio) and his best friend and stunt double, Cliff Booth, take a meeting with casting agent Marvin Schwarz (Al Pacino). We get to know all three through their drink preferences. Booth sips a Bloody Mary, and Dalton orders a Whiskey Sour. Schwarz, meanwhile, is shown in a flashback serving his wife a Mint Julep, silver cup and all, while pouring himself a cognac.

Later, Dalton is back at the Whiskey Sours, making himself a big batch at home, reciting his lines while sipping from a large beer stein. When, the next day, he flubs his lines on set, he blames himself for overindulging. The excess is emblematic of the loose grip he has on his career. “Eight goddamn f---ing whiskey sours...I couldn't stop at f---ing 3 or 4? I had to have 8?! Why?" he yells at himself in his trailer after the sordid take. The scene, which DiCaprio improvised, is a moment we can all relate to: feelings of regret from the previous night.

Perhaps the most significant cocktail in the film though is the pitcher of Margaritas Dalton fixes to celebrate the end of his time working with Booth. Margaritas appear in other Tarantino films, including “Death Proof” and “Kill Bill Vol: 2,” when Budd carelessly blends some in his trailer. Here, Dalton sips straight from the blender as he tells a car full of hippies to get off his street. Those people are the Manson Family and, as was the case with Budd, the Margaritas appear before a significant action sequence begins. —Sam Stone 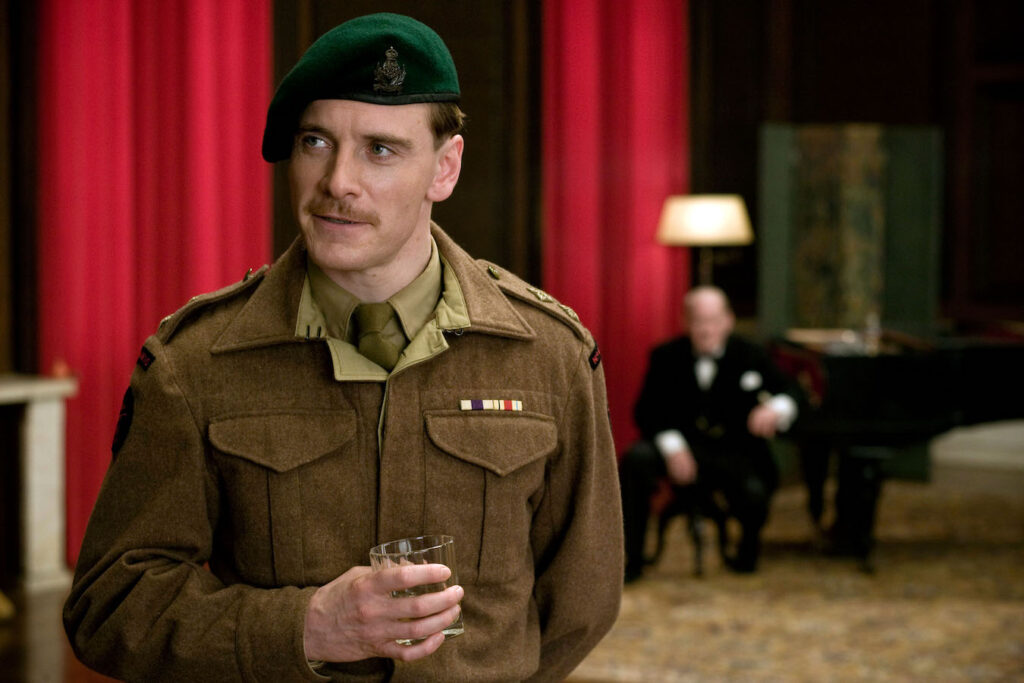 Michael Fassbender drinks scotch in each of his "Inglorious Bastard" scenes.

The “Tavern Scene” is not only one of Tarantino's most iconic movie moments, but one of the most memorable in contemporary cinema. It's set up earlier in the film, when Lt. Archie Hicox (Michael Fassbender) is summoned by General Ed Fenech, who invites him to have a drink. “If you offered me a scotch and plain water, I could drink a scotch and plain water,” Hicox says. It's a clever bit of foreshadowing as in his next on-screen appearance, he will likewise have a scotch—but it will be his last.

In the tavern having a standoff with Major Hellstrom (August Diehl), Hicox, posing as a German soldier, gives himself away by the way he orders three whiskies, using the wrong combination of fingers. The bartender brings the whisky over, a 33 year old bottle from the Scottish Highlands, along with fresh glasses so as to not contaminate the pricey dram. Hellstrom tells Hicox that he's exposed himself as a spy. “You're no more German than that scotch,” he says. This leads to Fassbender reciting one of the most famous whisky quotes in film: “There's a special rung in hell reserved for people who waste good scotch,” he says. “Seeing as I'll be rapping on the door momentarily [he finishes his glass] I must say, damn good stuff, sir." Moments later, bullets fly.

Beyond the quotables, of which there are many, it's an interesting note that both scenes involving the British Hicox also include whisky. There is a connection to be made with the impending shootout, but it also casts the British officers in an intentionally sophisticated light, particularly Fenech's note about “no junk in it.” These are men who appreciate the finer things in life; in Hicox's case, right down to his final breath. And as for the aged whisky, it's another artistic flourish from Tarantino. Such a rare bottle likely wouldn't have been around during World War II, though the oddly specific age statement makes us wonder what other symbolism the whisky is meant to convey. —Ted Simmons
tsimmons Insights Whisky Life Movies