This story was originally published in December 2019; offerings and opening times may be different due to COVID-related restrictions, so check in advance of a visit.

A large “TWO JAMES” sign hanging off the side of a low-slung warehouse beckons visitors to belly up to the circular bar at Detroit's first licensed distillery since Prohibition. A former taxi-repair shop, the high-ceilinged space now serves locals and tourists as an upscale drinks haven boasting a roster of classic and original cocktails made with Two James Spirits' whiskeys, rum, gin, vodka, and other spirits. 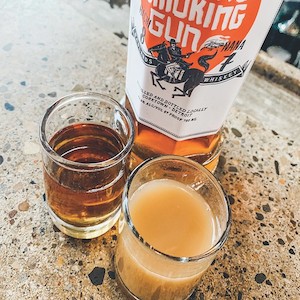 The unique drinks often call on familiar templates but add surprise through small tweaks, like the Whiskey Sour riff Hoffa's Heyday, which uses J. Riddle peated bourbon, ginger, and chili bitters to add some kick to the lemon, honey syrup, and apple cider that round it out. The Amarillo by Morning combines Catcher's rye with cedar-infused vermouth, orgeat, and Dram Apothecary palo santo bitters, yielding a cocktail that can't be pigeonholed. And the three-ingredient Disco in the D—Grass Widow bourbon infused with golden raisins, lemon juice, and caraway-infused agave syrup, garnished with the whiskey-soaked raisins—offers bold flavor despite its simplicity.

The menu changes four times a year, with staff contributing their own creations and the final selection decided by vote; cocktails that don't make the regular menu may be offered as occasional specials, and favorites reappear from time to time. Two James doesn't have a kitchen, but brings in local food vendors daily. A weekly DJ night and exhibitions by local artists draw in a crowd of regulars as well as tourists from all over the world. The bar is such a hangout that it began offering cocktail punch cards: Taste through the menu and get a free T-shirt. “People are really excited when we release a new menu,” says Andreas Joseph, who oversees the bar program. “I like to reward them.”

Must-Drink Cocktail: The Dashi Back, apour of Two James Johnny Smoking Gun whiskey with a shot of pork broth from local ramen restaurant Johnny Noodle King. (The whiskey was designed specifically to pair with the umami-rich broth.)
Don't Miss: The wall made of barrels, including some without heads to allow for peeks into the still room