What's It Worth? WhistlePig The Boss Hog

Whisky Advocate's Spring issue hits the newsstands on March 22nd and takes a deep look at rye whiskey's rebirth. Here, our auction correspondent checks out the recent hammer prices on WhistlePig's collectible series of rye whiskeys in his column What's It Worth?

WhistlePig The Boss Hog series has emerged as one of the market's most collectible annual rye whiskey releases. Fans eagerly await each year's edition, along with the latest pewter pig that adorns the stopper—a collectible that has become the porcine equivalent of Blanton's racehorse stoppers.

When The Boss Hog was first released in 2013, the goal was to deliver a yearly treat to collectors and connoisseurs that represented the finest rye in WhistlePig's stock. WhistlePig commits to five promises for each release: It will be a single barrel, bottled at proof, powerfully complex, distinctly unique from anything they've done before, and it will be stupendous. The liquid is sourced from Canada and shipped to Vermont for further maturation, finishing, and bottling. The Boss Hog releases are single barrel bottlings, but there are multiple barrels chosen for each edition so availability runs into thousands of bottles. Amassing all eight editions is a coveted achievement among fans. As the series has progressed, the age of the whiskeys has increased, the finishing processes have become more experimental, and the packaging has become more premium. While these extraordinary rye whiskeys cost $500 a bottle, the retail price has stayed the same since 2017 despite its growing international audience.

For the forthcoming edition, The Boss Hog IX, WhistlePig has reserved barrels for what it calls a unique finishing experiment. We will know more about it later this year.

None of the WhistlePig releases are over 10 years old, so evaporation shouldn't be an issue unless the bottle has not been stored properly. Make sure all the original packaging is in place: neck tags were included with earlier releases, and each release since The Boss Hog V onward has been boxed. From a security perspective, WhistlePig has invited owners of The Boss Hog VII and VIII to register their bottles via a code on the neck label. Simple, unbranded plastic shrink-wraps have been used since the start, which offer lower protection against refills than other methods but are frequently the main option for distillers choosing bespoke stoppers for limited-edition releases. Some auction houses have brought the bidders' attention to peeling labels, which could hint at issues with adhesive durability rather than labels being peeled off and reattached to other bottles, as the Boss Hog uses exactly the same glassware as the rest of the WhistlePig range. Auction houses will reject fake bottles if they believe a vendor is attempting to pass off a refill. 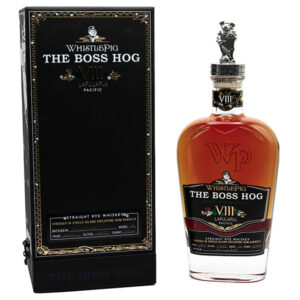 This edition is double finished in high-toast small batch rum casks from the Philippines, and delivers a tropical fruity version of a well-aged 18 year old rye with flavors of citrus, molasses, nutmeg, and allspice. This release completes the circumnavigation story started with The Boss Hog VII (see below), with Captain Magellan killed in the Battle of Mactan in the Philippines in 1521, as Filipino chief Lapulapu defended the land against the Spanish colonizers. Only one of the five galleons in Magellan's expedition made it back to Europe. The Boss Hog VIII received a 91 point rating from Whisky Advocate, reviewed in our Spring 2022 issue. 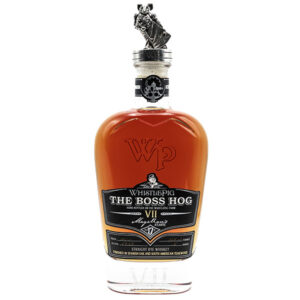 Finished in virgin Spanish oak and virgin South American teakwood, this 17 year old rye was the first Boss Hog to receive 93 points. It celebrates Ferdinand Magellan's ill-fated voyage in 1519 to find a Western route to the Spice Islands, considered by some to be the first circumnavigation of the globe. Additional to the standard bottling, WhistlePig created 40 large format 3-liter bottles sold exclusively in the UK for £2,200, with bottle #32 achieving the highest recent hammer price, fetching $6,784 at Whisky Auctioneer.

Samurai Scientist was the debut Boss Hog release from master blender Pete Lynch, and scored 92 points. Exhibiting the highest level of experimentation of the series to date, 16 year old rye whiskey was finished in barrels seasoned with umeshu, a plum liqueur from Kitaya Brewery in Yame, Kyushu, Japan. Although the number of barrels used nearly tripled, this release remains highly collectible, especially because two versions were released that now command different prices at auction. The majority of bottles have the pewter Samurai stopper in honor of Jōkichi Takamine, who used koji fermentation in the 1890s, but there are 1,000 bottles of the Katakana edition with Japanese labels where the stopper is entirely cast in obsidian black. WhistlePig also created a third version: 20 large format 3-liter Samurai Scientist bottles that were never released. 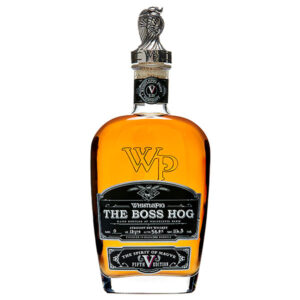 Mauve was one of WhistlePig's founding sows, who passed away in 2018. Danforth Pewter immortalized her as an angelic piggy on the stopper. In a rather eccentric touch, this 13 year old Boss Hog was packaged in a macabre black box in the shape of a tiny coffin. In recognition of Mauve's passion for apples, this single barrel rye was finished in calvados casks and scored 92 points. 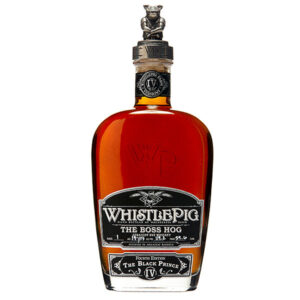 This was finished in armagnac casks, and delivers powerful spices and notes of orchard fruit, cinnamon, burnt sugar, and toasted marshmallow. The pewter Black Prince hog on the stopper is dressed in chainmail armor, though as with all the stoppers, his curly tail still protrudes on the back. 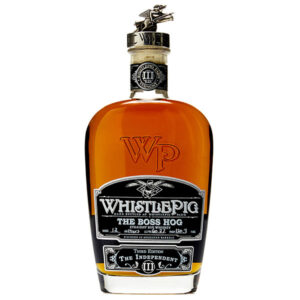 The first finished Boss Hog in the series, this rye whiskey was sourced from Alberta Distillers, Canada, and given a period of extra maturation in peated scotch whisky hogsheads. Scoring 92 points, it was praised for its notes of wood, black fruits, and farmy earthiness, though the peat and smoke notes are rather subdued. 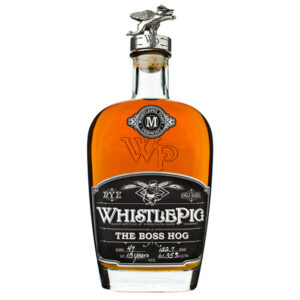 Named after Mortimer WhistlePig, their deceased Kunekune pig mascot and namesake, this whiskey carries his spirit with the introduction of the flying pig stopper. This rye whisky was sourced by WhistlePig's then master distiller Dave Pickerell (1956-2018) and scored 90 points. 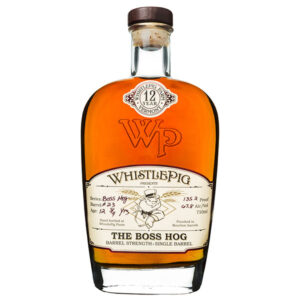 The first casks for this release were hand bottled in Vermont at barrel strength at the unusual age of 12¾ years. It scored 90 points, receiving praise for its drinkability without the need for water and its flavors of rye bread, currants, caramel, hot chocolate, and sweet spice. These bottles always fetch thousands of dollars but winning bids vary between auction houses, so you may be able to complete your collection for a lower price.