Can I Get Whiskey Delivered to My Doorstep?

Getting your favorite whiskey in the mail can be a thorny—and sometimes illegal—process. But things are changing, even if only slowly. While alcohol laws vary across the 50 states—and even among towns and cities—some state governments are pushing aggressively to have whisky delivered to your home more easily.

In California, wine lovers have been allowed that luxury for many years, but the Golden State's distilleries are more constricted. It's the same story across much of the nation: Most states permit wine to be shipped directly, but only 11 states, plus Washington, D.C., have the same rule for spirits.

The push is on to level that playing field, says Chris Swonger, who is president of spirits industry trade group DISCUS, citing a number of related bills put forward in state legislatures over the past several years. He also points to a DISCUS survey of more than 2,000 spirits drinkers showing that 80% believe direct shipping should be allowed. In a separate question, the survey found that 75% agree that wine and spirits should be subject to the same shipping laws.

The most recent glimmer of hope on this front has come from Kentucky, where a new law in March of 2021 now allows distilleries, wineries, and breweries who have obtained a Kentucky license to ship directly to in-state consumers, as well as to consumers in other states, so long as that other state permits direct-to-consumer shipping. Out-of-state producers can ship into Kentucky—if they have a Kentucky direct shipper license and if their own state laws allow it. But not every Kentucky distiller is diving in quite yet. “Right now, we've probably got a couple of dozen distilleries shipping [directly],” says Kentucky Distillers' Association president Eric Gregory. “Most are shipping to Washington, D.C., Alaska, and some other states” that allow direct-to-consumer shipping.

The main players so far are the boutique distilleries, which lack the clout to distribute their whiskeys far and wide, Gregory notes. Larger producers are likely to offer only limited-edition or rare whiskeys for direct shipping, he adds. Indeed, the ability to ship directly is a lifeline for smaller distillers, argues American Craft Spirits Association CEO Margie Lehrman. “Spirits should be treated equally to wine,” Lehrman adds.

In Washington state, distilleries can only deliver to in-state customers, but that has helped some smaller producers survive. “People are ordering a bottle or two, but having this ability allows small distilleries without any retail presence to be known and to have people support their businesses,” says Nathan Kaiser, owner of 2Bar Spirits in Seattle. Similarly, Pennsylvania allows licensed distilleries and “limited distilleries” (producing 100,000 gallons or less per year) to sell and deliver to in-state consumers. “If you have the ability to sell directly to consumers, suddenly you control your own destiny,” says Mark Meyer, co-owner of Wigle Whiskey in Pittsburgh. “It allows smaller distilleries to gain a foothold in the marketplace.” 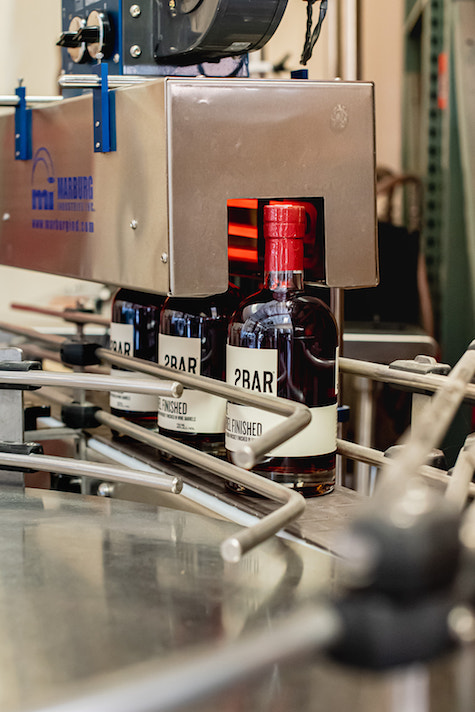 Like other craft distillers, 2BAR Sprits in Seattle has only been able to ship in-state but that has been helpful all the same.

Meanwhile, back in California, distillers are urging lawmakers to make direct-to-consumer shipping permanent after an executive order from Gov. Gavin Newsom last year allowed it during the pandemic. “It helped us keep the lights on and people employed,” says Ryan Friesen, head distiller at Blinking Owl Distillery in Santa Ana and vice president of the California Artisanal Distillers Guild. Newsom's order is to expire at year-end, and Friesen believes making it permanent could see California set the tone for other states. The details of California's legislation are still being ironed out.

Distilleries in New York state also benefited from a temporary ability to deliver spirits directly to their home state customers. But that honeymoon ended abruptly in June 2021, when former Gov. Andrew Cuomo declared the COVID-19 state of emergency over. Brian Facquet, head distiller at Do Good Spirits in Roscoe, New York, and president of the New York State Distillers Guild, says he's leading the charge for a permanent measure. It could depend on a pair of bills currently in the Senate and Assembly that would allow direct shipping in New York and other states where it is permitted. “We don't make a tremendous amount of money” from direct-to-consumer sales, Facquet adds. “All we're trying to do is survive.”

Other states are also reporting progress. In September, the North Carolina General Assembly authorized distilleries to sell and ship spirits to customers in other states—even ones that do not allow it themselves. While North Carolina distilleries are still not allowed to ship directly to home state customers, Carol Shaw, executive director of the Distillers Association of North Carolina, calls the new law a step in the right direction.

Kaiser of 2Bar predicts a “long, hard slog” before whiskey fans in most states can easily—and legally—order that coveted bottle in the mail. Meyer agrees that it could take a while, but that “eventually, either through court decision or the marketplace, the spirits world will resemble the wine world.”

Gregory, meanwhile, says the protracted process could ultimately be better anyway. “We know it's going to take years for other states to pass legislation so bottles can be shipped in and out,” he says. “But that's also giving [Kentucky distillers] time to dip a toe in the water and work out all the bugs with software and tax collection—so that when the doors do open to other states, we're ready to get in there and make sure it's done right and responsibly.”

States allowing direct-to-consumer shipping and/or related practices, according to analysis from the Distilled Spirits Council as of September 2021

Alaska: Allows out-of-state suppliers to direct ship to in-state consumers without any regulation by the state, subject to the rules of localities prohibiting importation or possession of alcohol beverages.

Arizona: Allows in-state and out-of-state craft distillers (producing up to 20,000 gallons per calendar year) to sell and deliver to in-state consumers.

Connecticut: Allows in-state consumers holding a Connecticut permit to import alcohol beverages from within or outside of the U.S., as long as the product is first delivered to adistributor.

Hawaii: Allows in-state consumers holding a Hawaii permit to receive shipments from outside the state if the product is otherwise unavailable in the state.

Kentucky: Allows in-state and out-of-state producers and suppliers (including importers) to ship to Kentucky residents in localities that permit alcohol beverage sales.* Limited to 10 liters of spirits per month per consumer.

North Dakota: Allows producers to sell and ship to in-state consumers. Limited to 9 liters of spirits per month per consumer.*

Oregon: Allows in-state distilleries appointed as distillery retail outlet agents to sell and deliver to in-state consumers. Consumers may purchase up to six different spirits products per day, but up to only two bottles of each of those six, for a total of 12 bottles of spirits per day.

Pennsylvania: Allows limited distilleries (producing up to 100,000 gallons a year) and other distilleries to sell and deliver to in-state consumers.

Rhode Island: Allows in-state consumers to order at a manufacturer's premise for shipment to them.

Washington: Allows distillers and craft distillers to sell and deliver to in-state consumers.

Washington, D.C.: Allows out-of-state manufacturers and importers to direct ship to consumers in the district without a permit or license. Limited to 12 bottles or cans (any size) of spirits per one-month period per consumer.

West Virginia: Allows in-state and out-of-state distillers holding a West Virginia private direct shipper license (less than 20,000 gallons per calendar year limit) to sell to in-stateconsumers and ship directly from the distiller's primary place of distilling by a mail shipping carrier to a retail liquor outlet in the market zone where the purchaser resides (retailer may add a fee).

Wyoming: Allows distillers with a satellite location to accept orders and deliver to in-state consumers.