Learn how to make a Sour, and you open yourself to a world of cocktails. The simple combination of spirit, sugar, water, and citrus can be mixed in almost endless ways. But the best base is, of course, whiskey.

The practice of adding citrus juice to spirits may have started in the 1700s when British sailors began consuming lemons and limes to prevent scurvy. Rum was part of their rations, and made a natural companion to the tart citrus, sometimes with water or sugar added. The concoction eventually made its way to shore, where drinkers weren't limited to a single spirit and naturally experimented with not only rum, but also brandy and whiskey.

In 1862, the recipe for a Whisky Sour was recorded in Jerry Thomas's The Bartender's Guide. The recipe called for 1 large teaspoon of powdered sugar dissolved in a little seltzer water, the juice of half a small lemon, and 1 wine glass of bourbon or rye, shaken. The drink was then strained into a claret glass and garnished with berries.

In the 19th century, more railroads were built, transporting out-of-season citrus more widely than in the past, and refrigeration to keep ice became more common. Thus, “the Sour got a big boost,” says Ted Haigh, a.k.a. Dr. Cocktail, author of the award-winning Vintage Spirits & Forgotten Cocktails and a founder of The Museum of the American Cocktail in New Orleans.

“By the late 1800s, bartenders were looking for something to put in their drinks to keep them interesting,” Haigh adds. Some added egg white (a variation sometimes called the Boston Sour), while others substituted different fruit or sweeteners.

And it wasn't just whiskey used in this cocktail—the Sidecar (cognac), Daiquiri (rum), Margarita (tequila), Daisy (gin), Collins (gin), and many more are all Sours. “The Sour is key to how drinks evolved,” Haigh says. “[The style is] simplistic and refreshing, and it's amazing that it's had such longevity.” 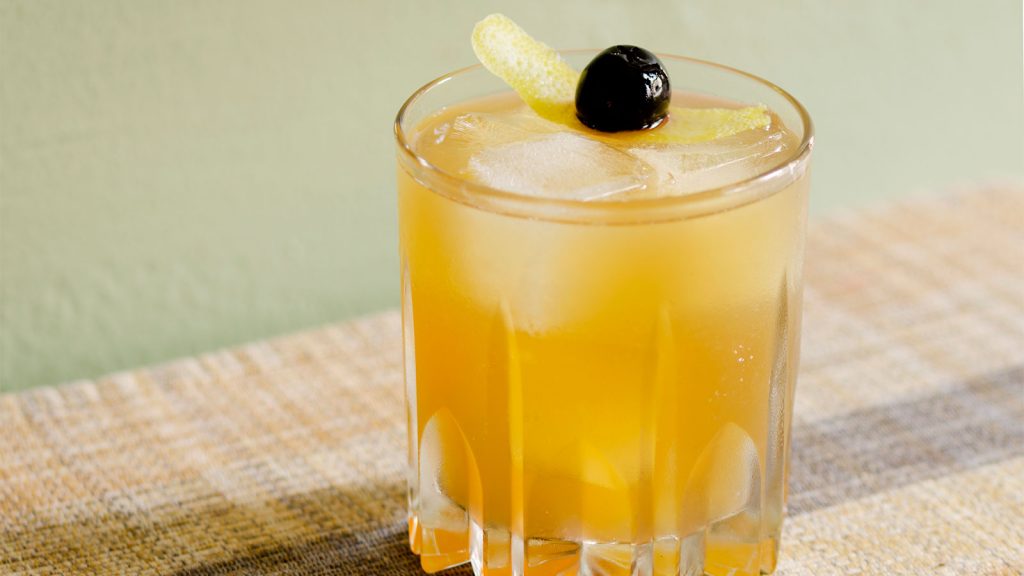 The Whiskey Sour balances tart, sweet, and the spice of bourbon or rye.

The 1862 Bartender's Guide called for bourbon or rye, and that's what most bartenders use today. “I recommend a high-rye bourbon at 100 proof or higher,” says Dane Dufresne-Durand, bartender at Proof on Main in Louisville, Kentucky. “The acidity of the citrus and the additional dilution from shaking can cover up a weaker spirit. The added rye content and higher proof allow the whiskey to come through while remaining balanced.”

However, Mike Raymond, owner of Reserve 101 in Houston, Texas, says “the possibilities are endless here.” He likes to use Maker's Mark, but also recommends Knob Creek for sharper flavor. You can even use scotch such as Shackleton blended malt, or—for a smoky sour—Ardbeg 10 year old.


Add sugar, lemon juice, bourbon, and ice to a cocktail shaker. Shake vigorously and strain into a rocks glass filled with ice. Garnish with a lemon peel squeezed over the cocktail, rubbed along the rim of the glass, and dropped into the drink along with a maraschino cherry.

About 20 seconds of hard shaking will properly chill the drink while adding the right amount of dilution.

Although some recipes call for simple syrup, superfine sugar has a better texture and taste. Shaking well will help dissolve the sugar, although some bartenders recommend stirring it in the lemon juice first, then adding the whiskey and ice and shaking.