Whisky Distilleries Face a Rocky Road to Reopening After COVID-19

Much of the world is reeling from the COVID-19 crisis as countries step gingerly toward reopening in the wake of lockdowns. Amid the uncertainty, some whisky distilleries are carefully moving forward with reopening plans of their own—in fact, some already are underway. But others are proceeding more cautiously.

In Scotland, the whisky industry has significantly scaled back operations; nearly 90% of production sites are either operating at reduced capacity or have closed entirely, according to the Scotch Whisky Association (SWA). A number of major distilleries have shifted production capacity to making hand sanitizer or providing ethanol to other manufacturers. All sites that are still operating have implemented strict social distancing, and visitor centers remain closed since initially shuttering in March, in line with Scottish government recommendations. They would be allowed to reopen in the third phase of the country's four-phase reopening plan, but there's no specific date for this yet, and it's not expected until mid-summer at the earliest.

Diageo, which owns nearly a quarter of all whisky distilleries in Scotland, has continued production even as its visitor centers remain shuttered. “We have not closed any distilleries,” a Diageo spokesperson says. “As is common practice within the scotch whisky industry, we actively manage production pauses at smaller distilleries on a rotation basis to balance production capacity and inventory levels.”

At present, seven of Chivas Brothers' 14 distilleries in Scotland are operational, production director Gordon Buist tells Whisky Advocate, adding that any decisions on increasing capacity or reopening sites will be based on government guidelines. As for its visitor centers, Chivas Brothers, which is owned by Pernod Ricard, is mapping out potential reopening plans. These could include “changes to the flow of tours, booking solutions, and relocating entrances, in addition to increased sanitation measures,” Buist says. “We expect that forms of social distancing will continue to be the norm across all of our sites until a vaccine is found, so we have put plans in place to ensure whatever the ‘new normal' brings,” whisky supply won't be interrupted and visitor centers can reopen safely.

Meanwhile, in the U.S., as states begin reopening in phases—and as anti-racism protests have swept cities across the country—some whiskey distilleries are cautiously taking steps to begin welcoming visitors in coming weeks. Distilleries on the Kentucky Bourbon Trail are allowed to reopen for limited tours and tastings as of June 8, but they'll need to follow state guidelines with groups of 10 or fewer, social distancing of 6 feet, and buildings limited to a third of capacity.

“Our distilleries have all been united and on the same page about meeting public health and safety guidelines that our local governmental and health officials have outlined,” says Adam Johnson, senior director of the Kentucky Distillers' Association's (KDA) Kentucky Bourbon Trail program. “Distilleries are working not only on safety guidelines for production, but for tourism and retail centers. Social distancing, enhanced cleanings, new tour policies and routes—all of that is being done.” However, the question of when individual distilleries finish implementing these changes and decide to reopen is “a bit all over the map, with most looking at mid-June for soft openings with limited tours and tastings,” Johnson adds. Whiskey lovers raring to hit the trail are strongly advised to contact individual distilleries for the most accurate and up-to-date information regarding hours, policies, and tours. 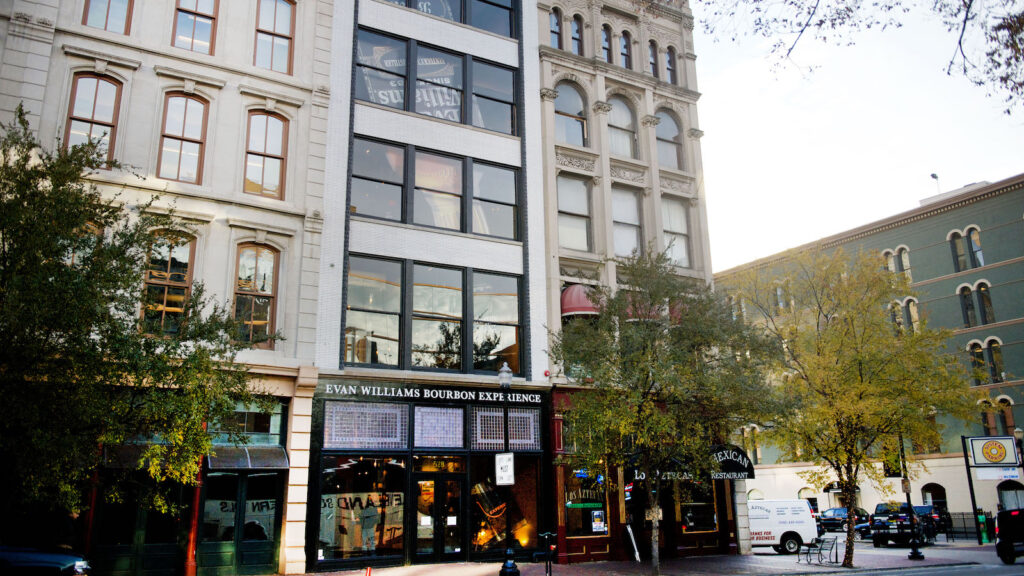 Heaven Hill's Evan Williams Bourbon Experience in Louisville, Kentucky, as well as its Bourbon Heritage Center in Bardstown, are set to reopen June 11 with new health and safety measures in place.

Most major whiskey distilleries in the U.S. have continued production during the pandemic with new social distancing and safety measures, while their visitor centers remained closed. But now, at least a couple of large distilleries in Kentucky have set welcome-back dates for guests. Buffalo Trace announced on social media on May 22 that it would reopen to visitors on July 1 with new guidelines and safety procedures. Tours and tastings, while still complimentary, will require advance registration, and the number of visitors per tour and tasting, and within buildings, will be reduced, though that will be slightly mitigated thanks to the distillery's recently expanded 35,000-square-foot visitor center. Meanwhile, Heaven Hill's Bourbon Heritage Center in Bardstown and Evan Williams Bourbon Experience in Louisville are set to reopen June 11 for retail and tastings on a modified Thursday-Sunday schedule, following health and safety guidelines recommended by the KDA and state, says Heaven Hill spokesperson Lauren Cherry.

Other big U.S. whiskey companies, however, are waiting before welcoming visitors. Jim Beam has “no immediate plans for reopening our distilleries for visitors or outside guests,” including at its distillery in Clermont, Kentucky and Urban Stillhouse in Louisville, says Beam Suntory spokesperson Dan Cohen. Brown-Forman's distilleries—including its Shively, Kentucky distillery, Woodford Reserve, Old Forester, and the Jack Daniel Distillery—will reopen in phases as states allow more businesses to resume operations, Brown-Forman spokesperson Elizabeth Conway says, but “we do not have a firm date for any openings at this point.” Four Roses not only closed its visitor center, but on March 20 also suspended production at its Lawrenceburg, Kentucky distillery, and at the moment is still reviewing plans on how to safely reopen on both fronts.

Elsewhere in Kentucky, New Riff Distilling reopened its gift shop, per state rules allowing it starting May 20, but has limited the number of customers. Its plans for restarting tours and tastings after June 8 “will certainly involve social distancing and limited numbers per tour,” co-founder and owner Ken Lewis says. Initially, New Riff will offer tours only on weekends, when the distillery is not in production. On July 1—when Kentucky bars will be allowed to reopen with restrictions—the distillery's Aquifer bar will reopen primarily for outdoor patio seating. At Rabbit Hole Distillery in Louisville, founder Kaveh Zamanian anticipates reopening for tours in August “at the earliest.”

While most large companies forecast little impact from the pandemic—at least as far as supply is concerned—for many small U.S. distillers, it's become nothing short of an existential struggle. Although a significant number of companies, both large and small, say they've benefited during lockdown from curbside bottle sales and relaxed state restrictions on alcohol delivery, and have continued firing up their stills to provide hand sanitizer, reopening presents a host of additional challenges, particularly for craft distilleries. “Many distilleries are having to retrofit” to adhere to safety guidelines and social distancing protocols, says American Craft Spirits Association CEO Margie Lehrman. “If they already had outdoor space, they're immediately pivoting to expand it. Some have had to completely redesign their hard goods—order new tables, chairs, barstools.” Others are considering implementing payment methods that don't require handing over a credit card, or putting a plexiglass barrier between tasting room employees and customers. “All kinds of changes are being made,” Lehrman adds. “Of course, with this comes a price tag—which many craft distillers did not have factored into their budget.” 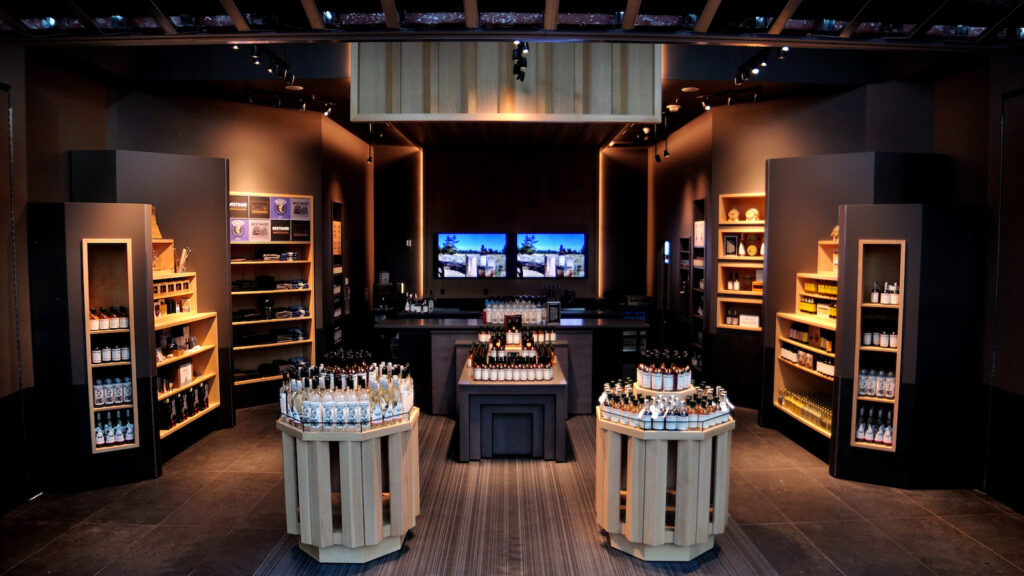 “A big part of visiting our tasting rooms is enjoying flights of the various whiskeys we make,” Mooney says. “I don't think we're going to feel fully reopened until that hospitality component comes into it, and we're able to offer flights and talk more about what we do.” When that happens, Westward drinkers have something to look forward to. While the world has been on lockdown, Mooney says, Westward has released two new whiskeys—a pinot noir cask-finished single malt, and a two-malt whiskey made from a combination of malted barley and malted rye—which visitors will be able to taste.

In Seattle, Westland Distillery plans to reopen its Cantilever Room following Washington state's phased reopening strategy. “As a precaution, we'll be reopening our operations approximately a phase behind the state,” says Westland guest experience manager Phoebe Dawson. Westland had intended to reopen the week of June 1, but had to delay because its county hadn't been cleared to move to the next opening phase, Dawson explains. But the Cantilever Room could still reopen this month for direct in-store purchases, with tastings and table service at 75% capacity slated for July, and tours and full-capacity table service later in the summer.

Catoctin Creek in Purcellville, Virginia reintroduced cocktail service on May 29 and set up new sidewalk seating in front of the distillery, with tables spaced at least 6 feet apart. Inside, masks are required, and only two people at a time may enter to buy bottles. “We are still unable to seat people for service in the distillery tasting room, nor can we do tours just yet,” says co-founder and chief distiller Becky Harris. “But we feel like this is a way to get a sense for how we can approach reopening as cautiously as possible.” 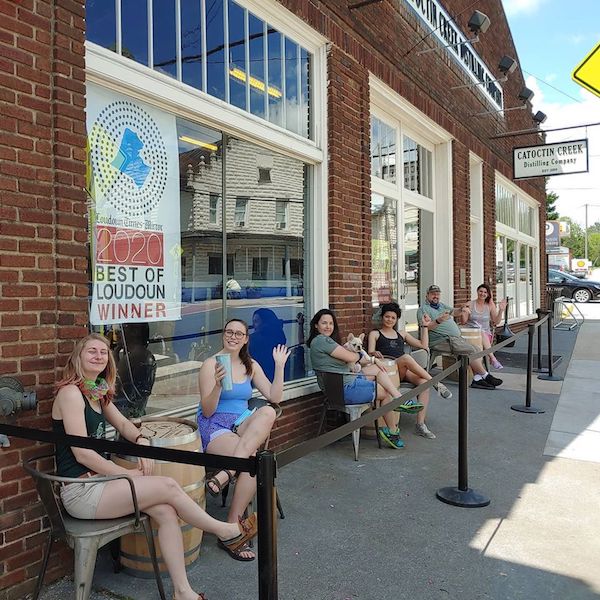 After specialty retail stores in West Virginia were allowed to reopen on May 21—and an executive order for out-of-state visitors to self-quarantine was lifted—it “seemed like a good time for us to open our visitor center,” says Smooth Ambler CEO and head distiller John Little. The distillery's tasting room is set to open June 9 from noon to 5 p.m. Tuesday through Friday, and Saturdays 11 a.m. to 3 p.m., with cleaning scheduled every hour. Anyone entering the building will have their temperature checked; masks are mandatory; and, based on the distillery's size, the number of people inside will be capped at five. Plexiglass panels have been placed at both registers, and hand sanitizer stations set up at the entrance and in the gift shop. But for now, Smooth Ambler is open strictly for bottle sales; tours and tastings probably won't resume before August, Little adds. Smooth Ambler's sister distillery, Fort Worth, Texas-based Firestone & Robertson Distilling Co., will be completely closed through June, with a tentative reopening date set for July 13 for limited events, but no tours.

Even distilleries without visitor facilities are adjusting to a new normal. Hotaling & Co., which makes Old Potrero whiskey, stopped production at its San Francisco distillery on March 17 after a shelter-in-place mandate was announced. Operations resumed on May 11 at reduced capacity, Hotaling & Co. president Dan Leese says, and the distillery is upgrading to a semi-automatic bottling line to allow for more effective social distancing.

For giant whisky companies and craft distillers alike, the road to reopening will be tough—and piecemeal. “It took about an hour to make plans to shut down, and within a day, we went from fully operational, everywhere, to fully shut down,” says Mooney of Westward. “We now realize that reopening will take much longer. There's no such thing as ‘the moment we reopen.' There's only a very slow, gradual, uphill process.”

Once it's time to reopen, the distillery will, inevitably, look “a bit different” from before the shutdown, Mooney adds, but he hopes the core Westward experience will shine through. “We need to make sure that we create a space that is safe for our team, for people who visit us, but also fun. [The goal is not] to get back to where we were, but…back to what our original mission was, which is to connect with people who love Westward, and people who love whiskey, and to offer a great experience to both. We realize everybody is going through the same thing, but it takes a while to get it right.”
Scotch News zkostro Kentucky Bourbon Trail American Whiskey COVID-19