It's high season for new whisky releases, as everyone gears up for the holidays and rolls out plenty of new options, along with highly anticipated limited editions like the Buffalo Trace Antique Collection, the Van Winkle lineup of whiskeys, and the Diageo Special Releases, which were fully revealed this week—with some significant changes, especially for American fans. 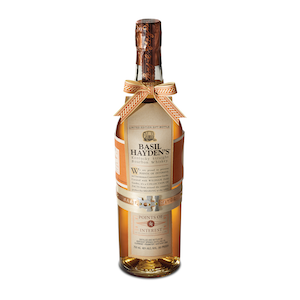 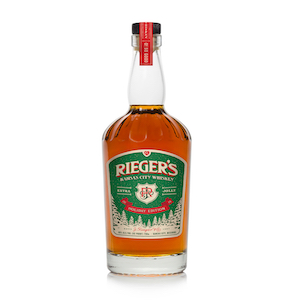 On to the new whiskies for the week. Woodford Reserve is rolling out its latest Master's Collection whiskey, a bourbon made with chocolate malted rye. The bourbon is priced at $130 and available in limited quantities.

Elijah Craig is debuting its first-ever straight rye this January, available in just a handful of states to start. The whiskey is priced at $30.

Sister scotch distilleries Aberfeldy and Craigellachie are releasing several single cask whiskies in the U.S. From Aberfeldy, there's an 18, 19, and 24 year old, while Craigellachie is offering a 19 and 23 year old. Prices range from $200 to $300 and, naturally, there are just a few hundred bottles of each whisky.

Details on the Nick Offerman edition of Lagavulin—which we reported on months ago—were confirmed this week. The 11 year old Islay single malt will be priced at $75 and available in limited quantities.

Jack Daniel's is releasing a second batch of its Single Barrel Heritage Barrel, which took the No.-3 spot in the 2018 Top 20. This year's whiskey is a year older and available in more limited amounts, priced at $65.

Chivas Regal has launched a 13 year old blended scotch honoring the Manchester Unitedsoccer team. The whisky is widely available for a limited time, priced at $35.

Teeling will debut its first house-made whiskey in January. Teeling Single Pot Still is priced at $65 and will have good availability, with 6,000 bottles to start. Meanwhile, Teeling has a 13 year old single malt finished in a chestnut cask that's rolling out next month. There are less than 900 bottles of the whiskey available, priced at $100.

India's Amrut Distillery has a new edition of Greedy Angels. Just 300 bottles of the 10 year old single malt, priced at $900, are available in the U.S.

Broken Barrel Whiskey Co. (formerly Infuse Spirits) is releasing three new limited-edition whiskeys: Mizunara Cask, Isle of Peat, and Cask of Amontillado. The stave-infused whiskeys is priced at $50, with 6,600 bottles of each available.

A new independent bottler, imported by Glass Revolution, is launching four single-cask scotches. The Firkin 10 year old, Islay, 49, and Rare single malts are each priced at $130, with limited amounts available.

Finally, Ireland's Clonakilty has partnered with New England Brewing Co. to release a blended whiskey finished in Fuzzy Baby Ducks IPA casks. The whiskey is for sale in Connecticut only, priced at $55. 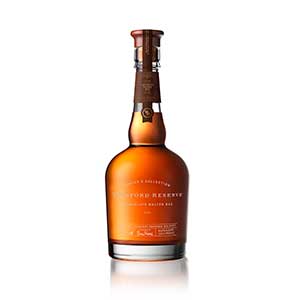 Don't be confused by the name: This is straight bourbon, made with 70% corn, 15% chocolate malted rye, and 15% malted barley.

Chocolate malt is simply a malted grain that's been toasted to bring out more of its sugars, which yields chocolatey flavors in the finished whisky. Most whiskies made with chocolate malt (like Glenmorangie Signet) employ malted barley, rather than rye; it'll be interesting to see how the heavily toasted malted rye turns out in this Woodford Reserve bourbon. Stay tuned for a review! 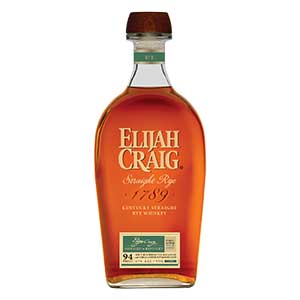 Availability: Initially available in GA, OR, NC, and SC, with expansion planned

Distilled from 51% rye, 35% corn, and 14% malted barley, this whiskey is described as "extra-aged" but no specific age is given. (Since it's a straight rye without an age statement, it's at least 4 years old). It has limited availability to start, although parent company Heaven Hill plans to expand distribution over time.

This is the first rye for Elijah Craig, which is known for its bourbon, including 2017 Whisky of the Year Elijah Craig Barrel Proof. Heaven Hill, does make other ryes, however, including Rittenhouse and Pikesville, and this year's Parker's Heritage Collection release, Heavy Char Rye. 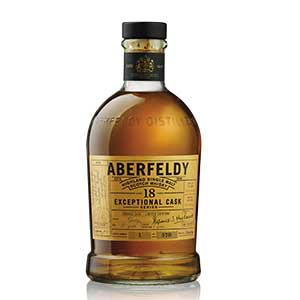 Sister distilleries Aberfeldy and Craigellachie (both owned by Bacardi Ltd.) are launching an annual series of single-cask whiskies, selected by malt master Stephanie MacLeod. The whiskies are bottled at cask strength and, understandably, available in small amounts. The selection will vary year by year. For 2019, there are three offerings from Aberfeldy and two from Craigellachie:

While the Aberfeldy 18 year old is called "double cask," the bottles still came from a single, unblended cask. The moniker denotes the fact that this whisky was initially matured in multiple refill hogsheads before being transferred to a single sherry butt for secondary maturation. 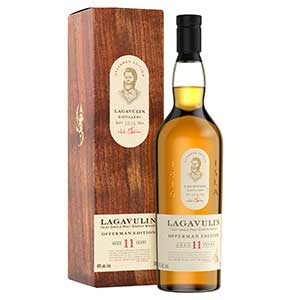 After initially reporting on this release back in March, it's now confirmed. This whisky was selected by Lagavulin distillery manager Colin Gordon and actor (and noted Lagavulin fan) Nick Offerman. The label includes a portrait of Offerman, as well as his signature and a quote.

It's well-known that Offerman is a Lagavulin fan, and he has done advertisements for the whisky for years, so it was only a matter of time before something like this happened. It might be kitschy, but Lagavulin is so consistently high-quality that it's almost guaranteed to be delicious. Look for a review in an upcoming issue of Whisky Advocate! 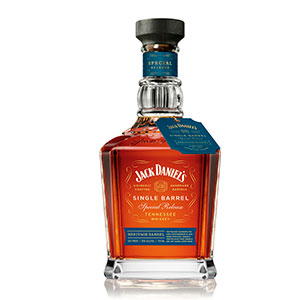 Jack Daniel's is bringing back Heritage Barrel, the single-barrel whiskey that took No. 3 in the 2018 Top 20, with an extra year of age. It's made using historic coopering techniques to create a unique flavor, maturing in barrels that were heavily toasted before being lightly charred. In addition, the barrel entry proof was lower than usual—100 proof versus 125 proof—and the barrels sat at the top of the warehouse to age.

Jack Daniel's master distiller Jeff Arnett says this is the last bit of Heritage Barrel that will be available for some time. The whiskey was initially created as a one-off, but because it was so popular when released, Jack Daniel's intends to bring it back again—it'll just take some time for the whiskey to age. 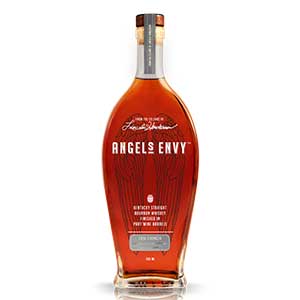 The 2019 release of Angel's Envy Cask Strength—an uncut version of the brand's bourbon finished in port casks—is hitting shelves; this year, the ABV is 61.2%.

If you like regular Angel's Envy, you're going to really like the cask-strength version. More alcohol means more flavor, and you can add water or ice to your taste. We're fans of the whiskey around here too; the 2018 release scored 91 points in the Whisky Advocate Buying Guide. 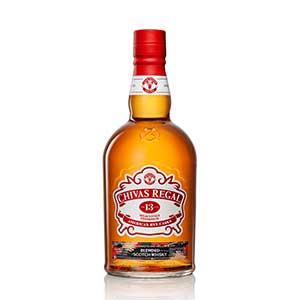 Availability: Limited edition; for sale in the U.S. only

Released in honor of the Manchester United soccer team, this blend includes a portion of whisky finished in rye casks. The age pays tribute to the team's 13 Premier League title wins while under the management of Sir Alex Ferguson, who retired in 2013.

This isn't the first Chivas Regal created in honor of Man U; last year, the brand released four limited-edition bottles in celebration of the fiftieth anniversary of the team's 1968 European Cup victory. Only one of those bottles was up for sale though, netting a price of $27,749 at Sotheby's, with proceeds benefiting the team's foundation. Priced at $35, this 13 year old whisky will be easy to enjoy all season long. 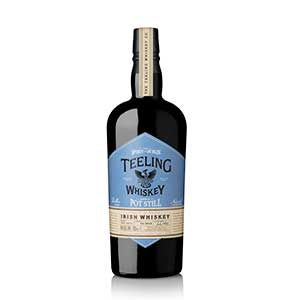 The first whiskey made at Teeling Distillery in Dublin to hit shelves in the U.S., this is a single pot still whiskey matured in first-fill bourbon, sherry, and virgin American oak casks. It's currently a combination of 3 and 4 year old whiskeys. 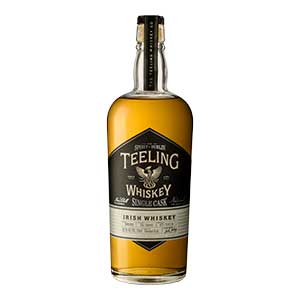 Availability: 896 bottles; for sale in CA, IL, and NY only

Distilled at Cooley Distillery in 2005, this single malt whiskey matured in bourbon casks and then underwent a 2-year finish in chestnut casks.

Teeling master distiller Alex Chasko says that chestnut wood is porous, which has a couple of effects on maturing whiskey. First, the wood holds a lot of its previous contents, so whatever it was initially filled with mingles with the whiskey. (In this case, that was Pedro Ximénez brandy.) Second, the soft, porous nature promotes oxidation, so that the whiskey takes on mature flavors more quickly than in oak.

Ireland is one of just a few places that allow non-oak woods to be used in maturing whiskey. (Another is Alsace, in France, where non-oak woods can be used after three years of oak aging.) 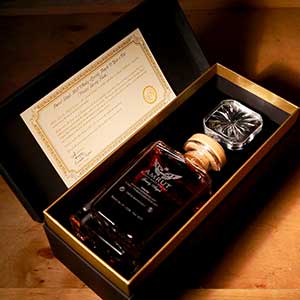 This whisky was distilled from unpeated Indian six-row barley and matured in bourbon casks for ten years. It's among the oldest Indian whiskies ever released, and was bottled in memory of Amrut's chairman, Neel R. Jagdale, who passed away earlier this year.

India's tropical climate speeds up maturation, and whiskies rarely spend more than a handful of years in cask as so much liquid evaporates so quickly. Cask evaporation is referred to as the angels' share, and thus this series of hyper-aged whiskies from Amrut was named. Past releases have scored very well: 94 points each for the 8 year olds released in 2013 and 2017. 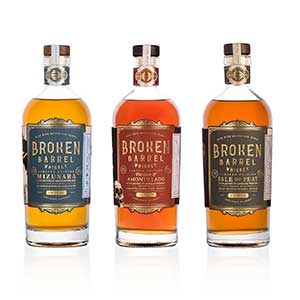 This limited-edition series from Broken Barrel Whiskey Co. blends various whiskeys and finishes them on different staves in stainless steel tanks. The first three releases are rolling out next month:

While it formerly released whiskeys under the Infuse Spirits label, Broken Barrel Whiskey Co. is relaunching its brands to better differentiate them from Infuse Spirits' line of vodkas and bitters. The company "finishes" its whiskeys through oak infusions, combining barrel staves or pieces in stainless steel tanks with the spirits. It has coined the term "oak bill" as a parallel to mashbill, citing both grain and wood as equally important in the development of whiskey flavor. 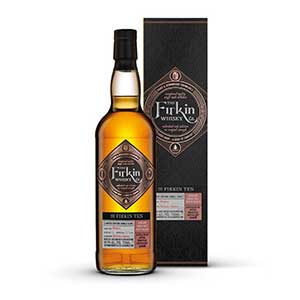 A new independent bottler, the Firkin Whisky Co. is launching in the U.S. with four single malt scotches, each with a different cask finish. There are 330 bottles of each variant in this initial batch; however, the whiskies will be continuously released.

While each release is a single cask, The Firkin's importer plans to bring in new casks as demand warrants. The distillery sources may vary, although The Firkin 49 will always come from a distillery founded in 1949 (which really narrows it down), and The Firkin Islay will likely always be sourced from Caol Ila. These whiskies' labels state their provenance, age, and other details quite clearly, so it will be easy to tell what you're getting even if it varies from release to release. 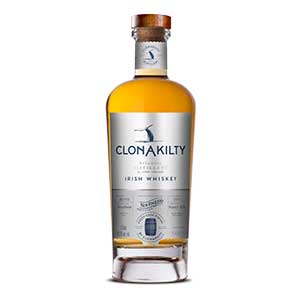 Availability: 1,392 bottles; for sale in CT only

A partnership between Ireland's Clonakilty and the New England Brewing Co. yielded this whiskey, which is a blend of malt and grain finished for three weeks in Fuzzy Baby Ducks IPA casks.

Beer cask-finished whiskey is now a style unto itself, with distilleries and breweries of all sizes and shapes partnering to create their own iterations. Clonakilty is selling this whiskey in Connecticut only, but has plans to partner with local breweries in other states where it sells whiskey; stay tuned for more details.