Peated barley isn't always required to make smoky whiskies. Peated-cask finishing makes a viable substitute: Just fill unpeated whisky into empty peated whisky casks and leave the flavors to integrate. Distillers around the world are doing it to add smokiness to every style of whisky imaginable. But do the results deliver the same intensity of flavor as a classic peated scotch?

When quarter casks from Laphroaig Distillery arrived at Talnua Distillery in Arvada, Colorado, they looked different from any other barrels in the warehouse. “They looked like grungy barrels you’d find on a pirate ship,” recalls Meagan Miller, co-founder of the American single pot still distillery she opened in 2017 with her husband Patrick. Against the virgin white oak barrels, these dark, torpedo-shaped Islay casks certainly stood out. “They’re just beautiful casks and they have a staggering aroma,” adds Patrick wistfully. “They look old, they’ve got age on them in Scotland, and they come from [first] holding at least 4 year old bourbon.” Still damp and smoky when they arrived, the casks gave off both wood and Islay single malt aromas. In 2019, the Millers filled them with their 3 year old American single pot still whiskey, made from 100% Colorado barley and matured in virgin oak. Then they waited. After 3 months, a noticeable ashy smoke quality developed, which became more refined after 6 months, now with a well-cured smoked meat flavor infused into the whiskey.

The impact of peat on the aroma of Talnua Peated Cask is surprisingly light, and is far stronger on the palate. Along with mouth-coating pot still spiciness, the peat flavors are more assertive. “I would still put us on the low to middle end of peat influence,” Patrick rationalizes. “We’re nowhere near as peaty as Laphroaig, but it’s got plenty of peat in it.” Peat can be a polarizing flavor, of course. Meagan describes Talnua Peated Cask as a gateway to peated whisky, embraceable for the peat curious and peat connoisseurs alike.

Across The Whiskey Sphere

Elsewhere in the American whiskey world, Hudson Whiskey Back Room Deal (90 points) is a peated-cask straight rye where bourbon barrels are sent from upstate New York’s Tuthilltown Distillery to Scotland, then used to mature peated Ailsa Bay new make and returned to Hudson for use in peated-cask finishing. Broken Barrel Isle of Peat (89 points) is a limited-edition American whiskey from Los Angeles, made after staves from a peat-ed Islay cask were submerged in a blend of wheat whiskey and American single malt for 30 days. In Illinois, Oppidan Spirits’ Smoke + Sea (91 points) is a blend of four-grain straight bourbon and solera-aged bourbon finished in French oak and peated Islay casks. 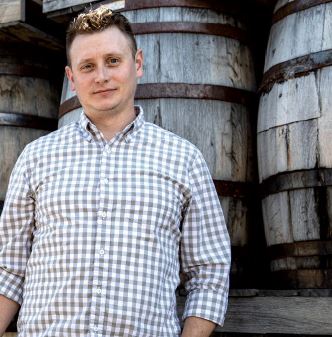 Among world whiskies, Welsh single malt Penderyn Peated (90 points) is matured in peated scotch whisky casks, and Milk & Honey Element Series Peated (92 points) from Tel Aviv, Israel uses 41% peated Islay casks together with a mix of bourbon; shaved, toasted, and re-charred; and virgin oak casks in the final recipe. Adjusting to a distillery’s own spirit style, each distiller will have experiences similar to the Millers when they marry their spirit with the peated-cask flavors.

Even the Scots, it seems, are keeping peated whisky barrels to use for peated-cask finishing. Early examples of this practice include the Balvenie Islay Cask 17 year old in 2001, followed by Balvenie Peated Cask 17 year old in 2010. Balvenie Distillery started laying down small amounts of peated spirit 20 years ago, which later became the Balvenie Peat Week releases. Chivas Brothers released Glenlivet Nàdurra Peated in 2015, followed by Scapa Glansa in 2016—both single malt whiskies finished in heavily peated scotch whisky casks. For scotch distillers making their own blended expressions, there’s no need to source peated casks. “We can pick from a good stock in our inventory—including several Islay distilleries, peated Caperdonich, and peated Allt-a-Bhainne,” explains Chivas Brothers master blender Sandy Hyslop. “We are emptying that sort of cask every single week for Chivas Regal, Royal Salute, and Ballantine’s, and that’s what gives us the edge.” 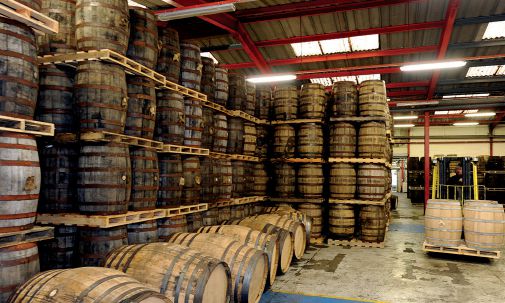 Hyslop directs those empty peated casks to certain distilleries to build up stocks for blending and specific finishing experiments.

“Scapa lends itself really well to finishing in peated casks,” notes Hyslop. “Not every distillery works perfectly, but Scapa is quite a delicate spirit: It’s got that sweetness, pineapple, and a little bit of leather.” In contrast to its Orcadian neighbor Highland Park, Scapa is an unpeated whisky by tradition, but for several years Chivas Brothers has been laying down experimental batches of heavily peated Scapa for 7 to 10 days each year. As a blender, Hyslop envisions using it like a concentrate in his recipes, rather than bottling it as an individual expression.

Dr. Bill Lumsden, head of distilling and whisky creation at Glenmorangie Company Ltd., is a world authority on cask finishing and is responsible for creating new expressions of Ardbeg, one of Islay’s peatiest whiskies. He has a foot in both camps. “I’m a great supporter of the ancient and noble art of finishing, but if you want to make a peated whisky, [it’s] far better to use peated malt,” Lumsden argues. “Burning peat and using peated malt gives you a far more complex, more noticeable smokiness than using a peated-malt cask for finishing. But if it adds something interesting to the whisky, then I don’t have a problem with it. It is a sort of ersatz way of doing it.”

With the NFT release of Ardbeg Fon Fhòid on BlockBar, Lumsden has shown his own idiosyncratic approach to peated-cask finishing. “This was a wacky experiment,” he smiles. Not long after the publicity generated by Ardbeg’s cosmic experiments on the International Space Station, Lumsden’s team was brainstorming about what to do next. A proposal was made to bury casks of Ardbeg in a peat bog. Former Ardbeg distillery manager Mickey Heads was co-opted for the use of his croft on Islay, which has its own peat bogs. Lumsden and Heads sunk two casks of 4 year old Ardbeg whisky into an excavated peat pit, and dug them up nearly 3 years later. Amazingly, the casks were almost intact, albeit mucky and coated in peat, so they were cleaned up and returned to the warehouse for another 4 years before being bottled as Ardbeg Fon Fhòid. Quite literally, this is peated whisky finished in casks that have been peated with actual peat.