How do companies set prices on old, limited, or in-demand whisky? Do they use some algorithm that takes into account age and quantity? Do these prices show the actual cost of production? Or is it just a guessing game by the liquor companies, trying to maximize profit on their rarest offerings?

“I don't feel there's a real rhyme or reason to what they do,” says Joseph W. Mollica, chairman of the New Hampshire Liquor Commission. Running the liquor purchasing for a control state that sees a lot of well-heeled tourists passing through, Mollica—who oversaw almost $865 million of alcohol sales in 2017—is able to get his hands on some of the rarest, most expensive whiskies on earth, like Glenmorangie Pride 1974 ($5,799) and Glen Grant 50 year old ($13,999). He's a whisky retail expert, yet even he can't put his finger on what exactly influences the price of a bottle. “Everybody seems to have a proprietary pricing method,” Mollica says.

The standard whiskies we see on the shelf carry prices that are based on real-world numbers: the cost of glass, grain, storage, taxes and tariffs, labor, shipping, and marketing. Add in a little margin for profit, and you're all set. But in the case of the rarest and most sought-after whiskies, these conventional formulas go out the window. In a time when transparency has become one of the biggest buzzwords in the whisky world, not many companies are willing to share insights on the pricing schemes for their most high-end offerings—though a few in the business did.

Jack Teeling founded Ireland's Teeling Whiskey Company, which recently released the 34 year old Vintage Reserve single malt, said to be one of the oldest Irish whiskeys ever produced. With only 38 bottles for sale, the suggested retail price is $5,000.

“It was just one cask and we were surprised there was so little left in it,” Teeling notes. “It was either ravaged by the angels or the guys working at the warehouse knew what was a good one [to secretly sip from],” he says, referring to the angels' share, or the evaporation of liquid from a wooden cask. He explains that the price is also an escalation of what Teeling had previously charged for its 30 year old ($2,000) and 33 year old ($4,000) single malts.

The lower yield from older casks isn't the only factor that influences prices. As the volume of liquid in the cask diminishes, in damp climates where alcohol content drops over time, so does the ABV of the whisky. “With scotch whisky, when you're getting stuff that's really old, like 50 year old Macallan, the alcohol content is sometimes so low in the casks, you couldn't do a single barrel expression as it wouldn't legally be scotch due to the lowered proof,” explains Alex Bachman, owner of Sole Agent, a broker of rare and vintage spirits. “So they have to blend several casks at the same age [to get to the legal minimum of 40% ABV]. The companies will then use that as an excuse to price higher.” 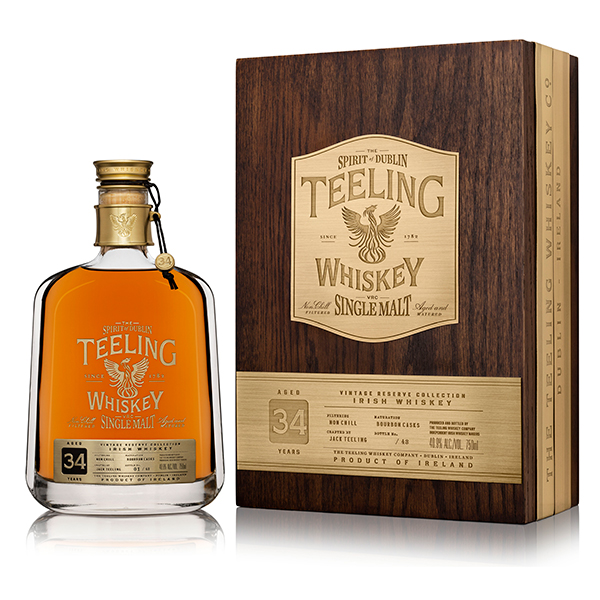 Lavish packaging is often a key component in extraordinarily high-priced whiskies. But is the pricy box creating the pricy whisky, or are producers choosing to put high-priced whisky in a fitting package? Consumers who spend thousands on a single bottle of whisky seem to be motivated by packages that reflect that prestige, and these can add to the cost. “Putting whisky in a crystal bottle that costs $300 itself is obviously a driving point [for high prices],” says Bachman. “The companies know what customers get excited about: excessively aged spirits, especially when it comes to bourbon, in a nice box.”

With limited-edition whiskies, the cost per package increases even more, explains Jack Teeling. Teeling's 34 year old comes in an opulent wooden box enhanced with gold trimming and accents. “Each bottle, each box, each cork—it's such a unique packaging,” he says. “If you produce 10,000 bottles, you apply the design costs across all 10,000 bottles. But apply it over only 38 bottles and things start getting very expensive.”

The Effect of Secondary Market Forces

In some cases, it's not the producers that instigate higher prices, but whisky drinkers themselves. A limited Port Ellen bottling was included in the first Diageo Special Release Collection in 2001. At 22 years old, it sold for a reasonable £110 ($154 at today's exchange rate). Even in 2008, a 28 year old Port Ellen was retailing at £180 ($251). By 2012, a 32 year old Port Ellen was offered at £600 ($838)—and the next year, a 34 year old was included at £1,500 ($2,095). What had happened? Sure, Port Ellen has been shuttered since 1983, and stocks decreased year after year. But, more significantly, a rabid and well-orchestrated online black market had emerged in the intervening years.

Though few distilleries will mention it, the secondary market—that is, an individual reselling whiskey to another individual, which is illegal in the United States—is a major consideration as well. Old Rip Van Winkle 25 year old's $1,800 retail price is around what Pappy Van Winkle 23 year old sells for on the black market (anywhere from $1,710 to $1,890 according to bottlebluebook.com, an online record of recent whisky sale prices). Not surprisingly, “flippers” who were able to purchase the 25 year old at retail almost immediately began offering it on the secondary market for up to $10,000. Despite their awareness of the practice, most distilleries refrain from marking up their whiskies to match the retail prices reflected by these economic forces, lest they look like the bad guys.

“It would probably be better for us to get that money,” says John Little, Smooth Ambler's CEO and master distiller. The distillery's Old Scout Single Barrel whiskeys can go for $500 or more on the secondary market, while only selling for $75 or so in stores and at the distillery. “We have a lot of people working for us that could use [the extra money],” he notes. “But we don't want to alienate our customers.” Ultimately, Little admits that if he ever raised prices, it would be to somewhere in between the current retail and secondary market to “split the difference.”

Retail stores that mark up whiskies above the distiller's recommended price can compound the problem. While some states set a cap on wholesaler or retailer markups, others do not, and some store owners inflate the price of in-demand whiskies like Pappy van Winkle. The result is often that the whisky doesn't sell, but having it behind glass in the store can bring in curious drinkers who might purchase something else.

"Despite their awareness of the practice of flipping, most distilleries refrain from marking up their whiskies to match the retail prices reflected by these economic forces, lest they look like the bad guys."

But the sky isn't always the limit—high-priced whiskies can and do linger on shelves long past their desired sell-by date. Dalmore released the Paterson Collection—a set of 12 single malts that included whisky dating from as far back as 1926, packaged in crystal decanters and accompanied by a handwritten calfskin ledger—in 2013, offering the single set at Harrod's department store for nearly £1 million. The whiskies sat unsold for a year until the distillery took them back. Finally, in 2017, four years after being initially offered, the whiskies were bought by a Chinese collector. Dalmore has since gone on to offer a number of expensive, aged whiskies, but none has approached the price of £987,500 ($1.4 million)—working out to over £82,000 per bottle—initially set for the Paterson Collection.

Of course, there's also the other end of the equation: companies actually undercharging for their whiskies. Sazerac, for example, sets the retail price for the highly coveted Buffalo Trace Antique Collection at a mere $90 a bottle—if you can find one, of course. Sazerac is well aware of how the secondary market and some unscrupulous retailers are pricing these bottles—typically in the $350-$800 range, depending on the release—and encourages customers not to buy them. In 2015 the company sent out an email newsletter explaining, “We do not want to see any customer of ours duped in the secondary market nor having to pay exorbitant prices.” Bachman still thinks the artificially low pricing is a strategy in and of itself.

“What they're trying to do at the end of day is sell their other stuff,” he explains. “Sazerac has no problem selling whiskey. What they worry about are the other brands in their portfolio in more competitive categories, like vodka or tequila. Thus, the Buffalo Trace Antique Collection and the Van Winkles become the carrot for bars and retailers. When I bartended in California, we called it the rain dance: you better drop Barton vodka in the well if you want Van Winkle.”

Teeling admits that he hopes the 34 year old will create a “halo effect for the rest of our range in the market.” Mollica adds, “That's exactly why these releases are so limited. They put a lot of hoopla and marketing behind them, but then the normal guy or gal feels good about getting the 12 year old. It might not be the $4,500 M by Macallan, but it's still Macallan.”

There's one thing everyone wants to know—are any of these bottles actually worth their asking price?

Mollica, however, believes the taste of the whisky is almost secondary. Something is worth its insanely high price, in a way, because it is so highly priced, and only certain people will ever be able to access it. That's the rhyme and reason. “Quite frankly, sometimes it's simply what the market will bear,” he notes. “The rareness and uniqueness of the product has a lot to do with it. But at the end of the day, the consumer buying it isn't worried about the cost. It's about having something no one else has.”
Scotch Collecting Insights Bourbon Irish Whiskey agoldfarb