Whisky lovers longing to spend eternity steeped in the aroma of their favorite spirit can do just that, thanks to the Forever Aging urn—a small cask made from the whiskey-soaked wood of bourbon barrels, designed specifically to hold the ashes of the dead, further moistened by a drop or two of their dram of choice.

The Forever Aging urn was designed by William Elam, a retired attorney and native Kentuckian, who, ironically, isn't big on bourbon. “I enjoy a strawberry Daiquiri around the pool,” he says. “Bourbon itself is a little hard, a little strong.” But Elam nevertheless enjoys the heady aromas of bourbon that waft over from nearby distilleries to the backyard of his Frankfort home, in the heart of bourbon country. “I can frequently smell the mash if I inhale deeply and the wind is right,” Elam says. “It is a beautiful flavor.”

In late 2018, Elam was musing over the fact that bourbon must be aged in new charred oak containers, leaving a lot of perfectly good barrels in search of new uses. His entrepreneurial spirit kicked in, spurring him to devise how they might be given a second life as urns. “I'm 77 years old, so I think about things like this,” Elam says. “I'm going to croak—all of us are—so what will be done with our ashes? I intend to be cremated, but I've looked at various urns and said, ‘Why be sitting on a mantle somewhere in a fancy vase that, a couple of generations from now, no one would care about?'”

Before he'd even decided on what shape the urns should take, Elam dreamed up the slogan that's now branded onto one end of each mini cask. “I had an epiphany,” he says. “‘Forever Aging.' Because the longer bourbon ages in the barrel, the better it gets.” (Well, not always.) Elam teamed up with Andrea Bogard LeBlanc—the founder of Sarasota, Florida-based Bogati Urn Company—to get the project up and running. He settled on a barrel-shaped design for the urns because it's easier to build from actual bourbon barrels. “It's very difficult to take curved barrel staves and make a square box out of them, and still leave the char integrity there,” he says. 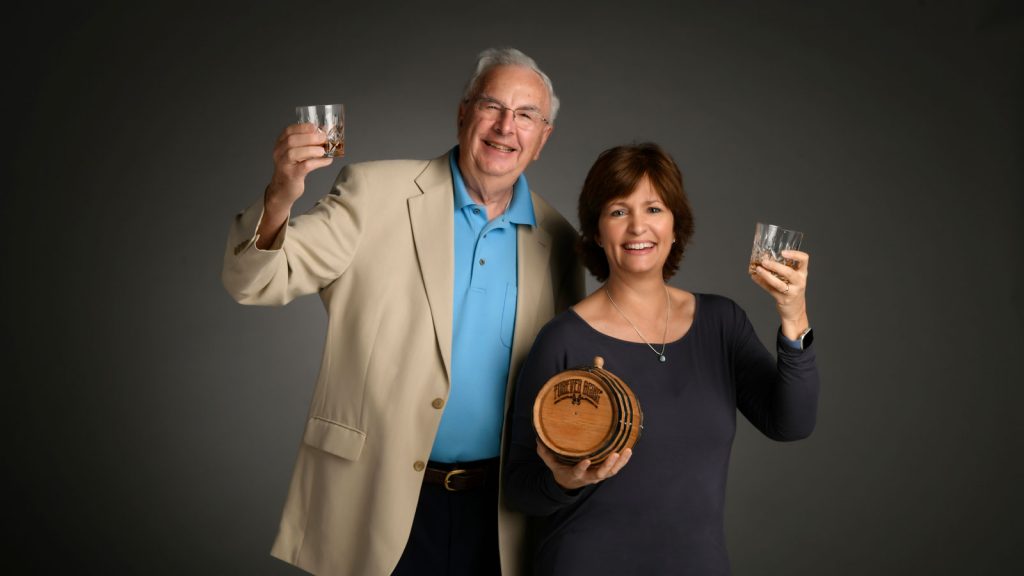 The Water of After-Life

The trademarked Forever Aging urns, which measure 8.5 inches by 6 inches, with a 3-liter volume, are made of white oak and manufactured by a Virginia-based cooperage. They're available for wholesale purchase, but only by funeral homes and crematories. Bogard LeBlanc says the urns retail for around $250, with the option of adding a personalized, engraved brass plate for an additional $12.95. Along with ashes, a bit of whisky—or any spirit—can be splashed inside, “giving comfort to the deceased,” Elam says.

Despite their unorthodox appearance, the urns are proving to be a bigger hit than expected. Bogard LeBlanc initially feared getting stuck with the first hundred mini barrels she'd brought in from the Virginia cooperage last Halloween. But in less than two months, they'd sold out to a slew of far-flung funeral homes and other retailers, not only in Kentucky, but also California, Texas, Puerto Rico (“Maybe for Puerto Rican rum,” Elam says); Bogard LeBlanc even received an inquiry from as far away as Australia. The response prompted a second order.

“I was thrilled,” Bogard LeBlanc says of the barrel urns' auspicious start—especially considering that in the funeral business, it's tough to predict what will sell. Typically, sales are “pre-need” or “at-need”—a whisky fan might seek to prolong her final sip by investing in a Forever Aging urn, or a family might buy one after the death of their Old Grand-Dad-loving granddad. “This is more specific to someone's unique taste than anything else we sell,” she adds. “We have some urns that are extremely traditional, but this one's definitely a celebration of life. It's lighthearted, which is why I think it's selling so well.”

Since funeral homes and crematories do the ordering, it's hard to pinpoint the demographics of the Forever Aging urn buyer, but Elam surmises it could be “anybody that loves to have a sip of bourbon. If it's somebody that chugs the cheapest alcohol they can drink, probably not. But if it's someone who has a slight air of sophistication—as they bend an elbow and lightly sip their bourbon, and have good conversation about sports, athletics, anything intellectual—I think it's probably going to appeal a little bit more to that type of person.”
Whisky Life Bourbon News zkostro Whisky Gear