Discover the Malts Behind the Most Iconic Scotch Blends

Many of the best cooks rely on a secret ingredient, or if not literally a secret, something that is absolutely vital to a delicious outcome. This is also true of the master blenders behind blended scotch whiskies, which are a combination of malt and grain whiskies from two or more different distilleries. In blended scotch, lighter grain whiskies lend drinkability, while malt whiskies are responsible for much of the backbone and flavor. It's often one single malt scotch, sometimes referred to as the heart malt, that serves as the starting point—the defining ingredient behind some of the world's most successful blended whiskies.

“A heart malt is something that is integral to the blended whisky and gives it its DNA and gives the brand its family style,” Sandy Hyslop, master blender for Chivas Regal and Ballantine's, says. “For me, it's the inspiration,” Stephanie Macleod, master blender for Dewar's adds. “It's the style of the blend and that always has to be there.”

Blend recipes, malt proportions, and certain components remain closely guarded secrets for many companies. But for those willing to divulge, it provides a look inside the blender's lab to see not only how blends are made, but to draw a direct line between a blend and its heart malt, which could be sitting but a few bottles apart on a liquor store shelf.

The Heart of the Story

Aberfeldy Distillery was built by the Dewar family in 1896 expressly to supply malt whisky to their growing blended scotch brand, and it remains central to the Dewar's blend today. In 1899, A.J. Cameron, Dewar's first master blender, created White Label. “I always imagine that when A.J. Cameron was creating White Label, that the style of Aberfeldy was a source of inspiration for the blend,” Macleod says. “Because when you compare White Label with Aberfeldy, you get that approachability that you find in both of them.”

From a flavor standpoint, Aberfeldy contributes fruity notes, toffee, honey, and a slight smokiness that can be identified in older expressions, such as Dewar's 18 year old. In Dewar's 18, Aberfeldy is joined by all the malts under current Dewar's owner Bacardi, including Glen Deveron, Royal Brackla, Craigellachie, and Aultmore.

While all expressions of Dewar's share a similar foundation, each one is a distinct blend. “We are keeping true to the house style, but each one has a slightly different take on it,” Macleod explains. Like other blenders, Dewar's includes whiskies produced by other companies, generally in much smaller amounts, to add greater complexity. There is no telling the full range of malts in each blend, but Macleod says one constant is a must: “Aberfeldy is non-negotiable, that has to be there. So we can't substitute anything in for that.” 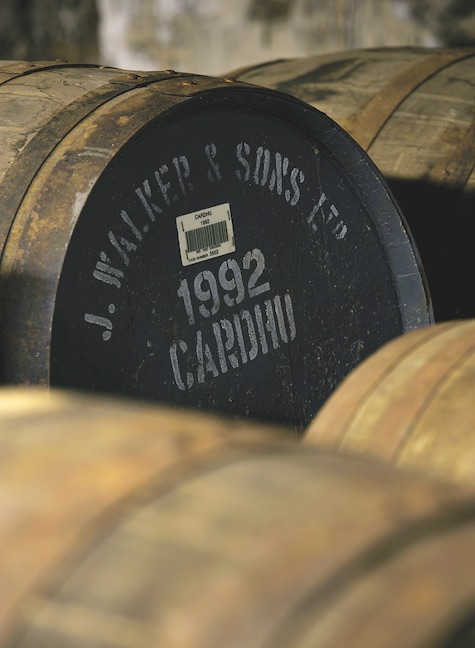 Johnnie Walker has a vast array of single malts at its disposal, relying on Cardhu and Clynelish as the heart malts.

Dewar's and Aberfeldy are so closely linked that there is a blending component to the Aberfeldy Distillery tour. “Obviously we talk about how Aberfeldy is made and how malt whisky is made, but we're also bringing in, ‘This is how we blend, this is the heritage behind Dewar's,'” Macleod says. “It's really important for us to celebrate the single malt, but also to celebrate what happens when you combine lots of different single malts with grain to make our blend.”

“Cardhu's at the heart of Johnnie Walker,” says Emma Walker, one of 12 master blenders that work on Johnnie Walker. “Cardhu was always a blender's favorite,” she adds. “It was essential to Johnnie Walker. They always created high-quality spirit and it became a partnership even before Cardhu joined the Johnnie Walker family.”

Owned by Diageo, Cardhu Distillery is just one of the global corporation's 29 whisky-producing distilleries in Scotland alone. This gives the Johnnie Walker blending team a vast library of stocks to work with. For the blended scotch whisky White Walker, the blenders elected to use Clynelish as the heart malt, due in part to its location as a northern distillery. The taste of Clynelish is also familiar to fans of the popular Johnnie Walker Black Label. “That waxy character is one of the reasons Clynelish is so important to Johnnie Walker Black Label,” Walker says, “and it's important to Jane Walker as well because you get a lovely mouthfeel.” Walker used Black Label as an inspiration for Jane Walker, a blended malt, and calls Clynelish and Cardhu “key whiskies” for the Johnnie Walker brand.

According to Walker, the blending team works closely with each distillery to ensure they have the proper single malts available, but the fact that she and her co-blenders are able to make adjustments when necessary offers a lot of flexibility in constructing the iconic blends. Walker explains that if a particular single malt grows in popularity, it may not be available for use in blending “But part of the reason we have so many distilleries is that we can work with that,” she notes. “We can work around that. We're used to distilleries coming and going.”

Taste These Scotch Blends Alongside Their Heart Malts

Master blender Jim Beveridge has been working on Johnnie Walker for 40 years, and explains how, rather than using a base formula for Black Label, he strives for a consistent profile. “That flavor profile is defined. And then you think, how do I achieve that flavor and which malts will I use to achieve that?” he says, “And then, in achieving that, there are some malts that will be particularly important in getting to that destination.”

Putting the Pieces Together

There are of course other factors that influence a blend's final outcome, such as cask treatment, age, and the grain whiskies used. These elements help shape the whisky, but blenders are largely manipulating the core ingredients, and as Hyslop explains, Chivas Regal starts with two malts in particular.

“Strathisla and Longmorn are in every single expression of Chivas Regal. They help form the character of the blend; they make the blend multi-faceted. They build up the layers of flavor,” he says. “I always liken it to building a house: These are the foundation. Everything else is finery and makes it a fabulous-looking house at the end of the day, but it's those signature malts in there at the base that build that house.” Strathisla contributes fruity pear notes, while Longmorn adds to the sweetness with creamy toffee flavors.

It can be challenging for blenders to find the right combination of malts, with Walker likening the process to waves that can either merge together or clash. “Those strong individual malts, you bring them together; it can take a little bit more care and a bit more time to figure out how they slot together,” she says. 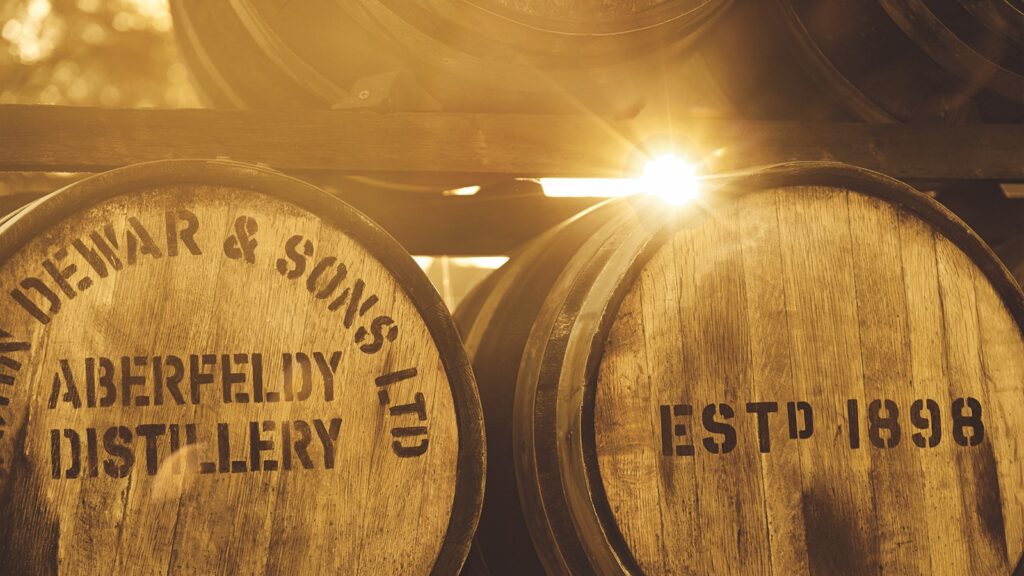 Aberfeldy single malt is so important to the Dewar's blend that there is a blending component to the Aberfeldy Distillery tour.

William Grant & Sons master blender Brian Kinsman doesn't disclose the malt at the heart of Grant's blended whiskies, but says that he looks to pull out flavors from multiple malts. “I want the final blend to be greater than the sum of the parts,” he says, noting that Grant's has 25 different whiskies in its blend.

Of course a blended scotch is the result of the combined quality and flavor of every component, including grain whiskies, which often go unacknowledged or are thought of as lesser products. “I think it's so sad that they are not appreciated as much as they should be,” Walker says. “They're beautiful.”

For fans of single malt scotch, being able to identify the single malts that make up a blend is a fun endeavor that is sure to bring new appreciation for the craft of blending. “I think [consumers] think a blend is somehow dumbing down the whisky, but it's not,” Macleod says. “It's adding complexity, and doing things like finishing just showcase the versatility of blending.” Likewise, fans of blended scotch may want to seek out the heart malts that form their flavor foundation. Both have lots of pleasure to offer. The secret is out.
tsimmons Features Scotch Fall 2020 Insights Blended Whisky