Of all Scotland's many islands, few serve up such a heady blend of heritage, romance, folklore, and dramatic beauty as Skye, “the Misty Isle,” or Eilean a' Cheo in Gaelic. Despite measuring only 50 miles across, Skye is actually the largest of the Inner Hebrides, boasting a spectacular coastline of sea lochs and peninsulas. Of most importance to whisky lovers, Skye is the gateway to three whisky distilleries. The most well-known distillery is Talisker, producer of rugged single malts recognized for the way it captures the spray of the sea and delivers a distinctive peppery spice.

If there is a drawback to this beautiful island, it is that we are not alone in realizing its many charms. The intimate island now attracts an outsized 650,000 visitors annually, often resulting in overcrowding as narrow roads are blocked by large motorhomes and parking lots overflow. However, with thoughtful planning, a visit to Skye will still be a delight: a destination of meals, vistas, and whiskies the likes of which can be found nowhere else.

Recognizing the fact that Skye faces issues relating to overcrowding at times, the national tourism body Visit Scotland, in association with the island's tourism management organization Skye Connect, has launched a marketing campaign, #skyetime, which advises visitors to “stay longer, see less, experience more.” It is generally good advice and, combined with some specific strategies, will ensure a positive experience.

The island capital of Portree tends to be a bustling place most of the time, as does the village of Broadford, further to the south, which offers a number of hotels and restaurants that feature an abundance of locally caught seafood, making it hard to go wrong. The most photogenic tourist destinations have become must-sees for the Instagram generation, keen to bag and share their experiences of these places. They are popular for good reason: They are all visually stunning, but not quite so stunning when shared with busloads of eager admirers.

see the sights and drink the spirits

This is not to say you should forfeit the opportunity to visit key sights, including Kilt Rock; the Old Man of Storr, a spectacular pinnacle of stone; the crystal-clear Fairy Pools on the River Brittle; the vast ancient landslip of the Quiraing; and Neist Point Lighthouse. But in order to avoid the crowds, you'll do best to visit early in the morning, with late in the day the second-best alternative.

For the whisky enthusiast, the most alluring place to experience on Skye is Talisker Distillery, located at an idyllic spot on the outskirts of the village of Carbost, in the west of the island, surrounded by hills and with stunning views across Loch Harport. Along with the magnificent Dunvegan Castle, Talisker is Skye's most popular paid attraction, welcoming 75,000 to 90,000 people each year according to senior site manager Diane Farrell. 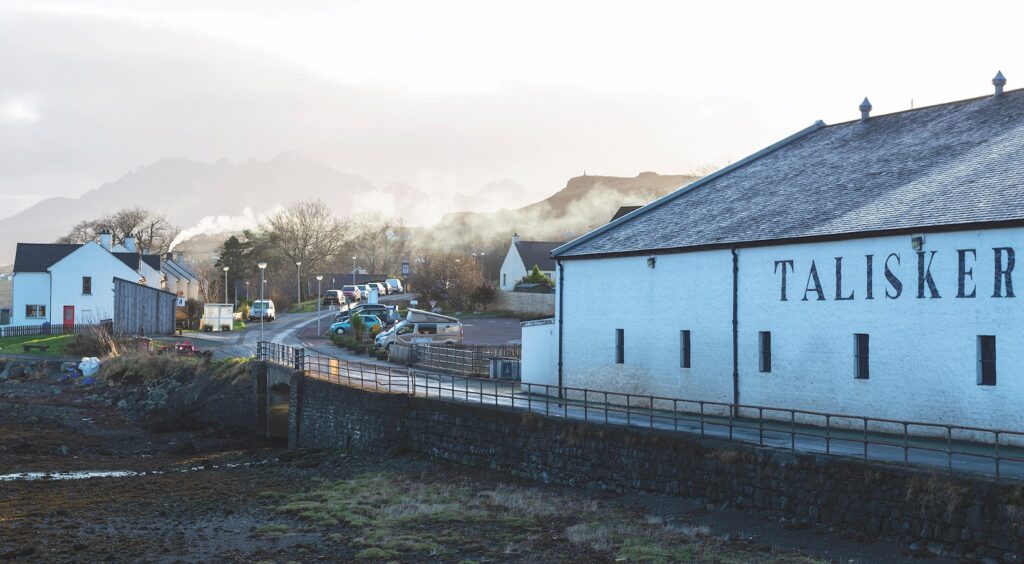 The Isle of Skye's most well-known distillery is Talisker, producer of rugged single malts.

“It really is incredible to see people making pilgrimages from all over the world to come here,” says Farrell. Booking tours in advance is essential, except at the quietest times during winter. As long as you've made the trek, we suggest opting for the Talisker Masterclass Tour ($58, two hours) which includes a tasting of six expressions.

More than three million bottles of Talisker were sold in 2018, making it among the most popular single malts from international spirits producer Diageo, second only to Singleton. Talisker enjoys a devoted following, and the whisky has seen a significant number of new expressions released during the past few years.

Talisker boasts a stylish tasting bar, where you can sample the full range of single malts, including the current distillery-exclusive bottling, selected by the staff and available for purchase only at the distillery. Do grab one, or two. Two different flights of Taliskers are also on offer, and even Talisker truffles, if your tooth is sweet.

Although the distillery was established by brothers Hugh and Kenneth MacAskill in 1830, most of the present production buildings were erected following a serious fire in November 1960. The replacement stillhouse—now capable of turning out 3.3 million liters of pure alcohol (lpa) per year—was equipped with five stills that were exact replicas of the originals, and these stills give an insight into the character of the single malt once referred to as “the lava of the Cuillins.” Farrell explains: “Our wash stills are tall, with a unique bend in the lyne arm used to reflux heavier elements back into the still, and the way in which we run our worm tubs ensures that there is minimal copper contact.”

“This all adds to the complexity of Talisker spirit and is when the signature peppery/spicy notes make their appearance,” she continues. “At Talisker, many will agree, we've managed to capture a lot of the flavor and character of our environment through our production process. Talisker imbibers will tend to remark on how they can smell and taste our ‘made by the sea' character with every sip.” For anyone who has sensed a whisper of the sea or the rugged outdoors in sipping Talisker, a visit to Skye will only bring these perceptions into ever-sharper focus.

a new distillery on the block

For almost two centuries, Talisker could claim to be the only legal distillery on Skye. Finally, in 2017 it was joined by Torabhaig, Gaelic for "the hill above the bay." Torabhaig is located in a converted and expanded historical farmstead on the Sleat (pronounced "slate") Peninsula, in the southwest of the island. Sir Iain Noble, one-time merchant banker, Skye landowner, and passionate advocate of the Gaelic language, identified the dilapidated farm dating from the 1820s as the ideal site for his proposed “Gaelic-speaking” distillery; sadly he died in 2010, before the project could come to fruition.

With planning permission in place, Mossburn Distillers Ltd. grabbed the baton and committed to seeing Torabhaig to completion. Starting in 2013, the derelict property was revived with new buildings and a visitor center in the original style, along with distilling equipment—including a 1.5-ton semi-lauter mashtun, eight Douglas fir washbacks, and a pair of Forsyths stills, named for original visionaries Sir Iain and Lady Noble.

The first spirit from Torabhaig flowed in January 2017 and Mossburn CEO Neil Mathieson says, “I had an idea of what a non-Islay ‘island' whisky should be. We didn't want to try to be Talisker, so went for a higher peating level than Talisker, and it's an earthy peat, sourced from Aberdeenshire, not medicinal Laphroaig style. The height and width of our stills was partly governed by the building they were going into, but also they were designed to give the kind of spirit we wanted. They're quite short and round, as we're looking for a pretty robust whisky here. We could only make a maximum 600,000 lpa even if we worked three shifts all the time, and we actually have a day shift and a night shift.” 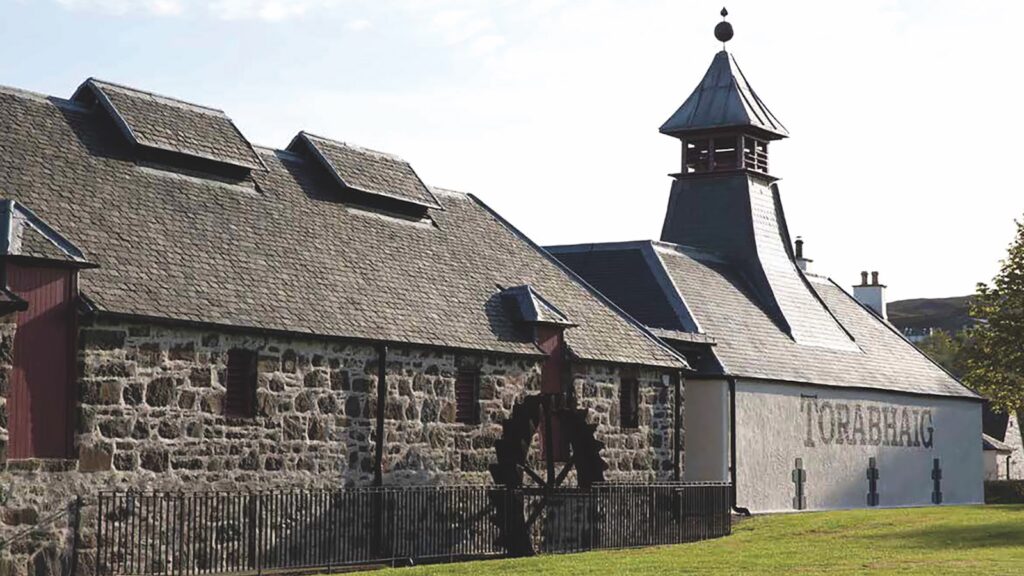 For almost 200 years, Talisker was Isle of Skye's only distillery, until Torabhaig opened in 2017.

Unlike many scotch distilleries that tend to champion a single veteran master distiller, Torabhaig relies on nine distillers. All are young and eager locals, who are being trained and supported in furthering their formal education through programs like the Institute of Brewing & Distilling's Diploma in Distilling. “Nobody in the distilling team has ever worked in a distillery before,” says Mathieson.

Beginning in July 2020, the first selection of just 100 casks were made for an initial bottling, which hit U.S. shelves in February 2020, and were labeled as distilled in 2017. Peating levels have subsequently been increased from 55-60 phenol parts per million (ppm) to 70-80 ppm, and spirit is being filled into a wider range of cask types. Mathieson intends to bottle such batches of the most precocious casks until the time arrives for the initial age-statement release: a Torabhaig 10 year old single malt.

Starting in 2020, Torabhaig also planned to offer a more in-depth tour in addition to the current standard version ($13), along with whisky dinners, though COVID-19 put a dent in plans. Keep an eye on their website for details on resumed tours and events.

the duo becomes a trio

To reach the third and final distillery you must cross Skye to the east coast and the tiny crofting community of Sconser, located at the head of Loch Sligachan. From here, it's a 25-minute car ferry crossing to the neighboring small island of Raasay, where illicit distilling took place until around 1850. Today it is home to legal whisky making at Isle of Raasay Distillery, constructed adjoining the former Borodale House, which now serves as a visitor center and provides bed & breakfast accommodations.

Owned by Edinburgh-based R&B Distillers, Isle of Raasay Distillery has an annual capacity of 200,000 lpa, with Alisdair Day and Bill Dobbie at the helm. Day notes, “We filled our first cask on September 14, 2017 and went into full production five days a week on September 27of that year.”

The pair of stills fabricated by Tuscany's Frilli displays a certain Italian flair. As Day puts it, “I like to think that Forsyths makes the Rolls-Royce of stills, and Frilli is the Ferrari. Very stylish! Our setup also gives us potential to produce different styles of spirit. We make unpeated spirit and spirit from malt peated to 40 to 55 ppm. We're doing approximately 50:50 through 2020. We're aiming for a spirit that's not too heavy, with a degree of elegance, with dark fruity notes encouraged by long fermentations.” 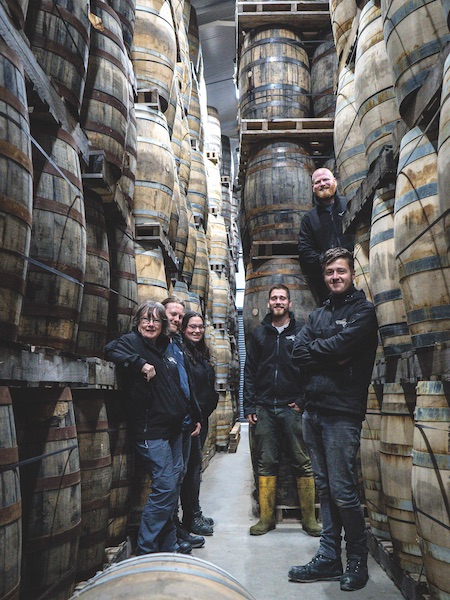 The Isle of Skye's third distillery, Isle of Raasay, filled its first cask in September 2017, and makes both peated and unpeated spirits.

Raasay is going down a slightly unorthodox path to create a house style for the future. It's filling both unpeated and peated distillates into three different cask types: Woodford Reserve rye barrels, virgin American oak barrels with a high level of charring, and Bordeaux red wine casks. The resulting six permutations will give Raasay many options for blending, with its first single malt release scheduled to debut April 2021.

Prior to routinely producing these six variations, Raasay made a one-off peated expression, Day explains. “The first release has been peated to 48 ppm, and we took a narrow spirit cut. We filled it into bourbon barrels, and it's being finished in Bordeaux wine casks. We've put 40 casks aside, and advance sales are going very well.”

As at Torabhaig, the distillery provides a valuable opportunity for local employment. According to Day, “More than 20 of the island's 160 inhabitants are employed here. It's had a hugely positive impact on the place.”

In fall 2019, Isle of Raasay Distillery was awarded Tourism Destination of The Year at the inaugural Scottish Whisky Awards, in recognition of the way it cares for visitors. Distillery tours ($13) and Whisky and Chocolate tours ($19) are available, and pre-booking is essential for Sundays, but advisable regardless.

In Raasay, Torabhaig, and Talisker, the Hebrides has a cluster of three excellent distillery experiences to offer: an iconic veteran, and the optimism of youth, as the two newcomers step up. Blend this with superb scenery, historic attractions, and great places to eat and drink, and you appreciate the old island saying that “Skye is conclusive proof that, sometimes, God was just showing off.”