Win Big at These 5 Whisky Bars With Games

Whisky will never qualify as a sports drink, but that shouldn't limit your barroom sipping to leather couches and cozy firesides. A fine dram can be made even more exhilarating by bowling a strike, putting a hole-in-one, or even heaving an ax at a target. We've rounded up a handful of bars that offer activities guaranteed to get you moving and encourage some friendly competition, each offering a respectable selection of whiskies—whether neat or in a cocktail.

This article was originally published in October 2019. COVID-related restrictions may affect some of the opening times and offerings of these venues, so check in advance of a visit.

Pinewood Social—Nashville, Tenn.
This industrial-looking bar and restaurant offers Southern comfort fare, craft beer, and six vintage bowling lanes. The solid whisky list includes American, Japanese, Irish, and scotch, ranging in price from $9 to $63 for a two-ounce pour. Each lane accommodates groups of up to eight people and includes a dedicated server to keep drinks flowing. Order the One Fell Swoop ($11.75)—rye, lemon, IPA, lavender, and egg white. Scoring is done manually, so sharpen your pencil and let 'er roll.

Up Your Game: Focus on your footwork, says Dick Allen, Professional Bowlers Association seven-time tour titlist. “You want a natural, smooth braking system. More slide on the toe area and gradually slowing down from toward the back of the heel.” Kicking off the rentals to buy shoes (around $35) is a great investment, Allen adds. 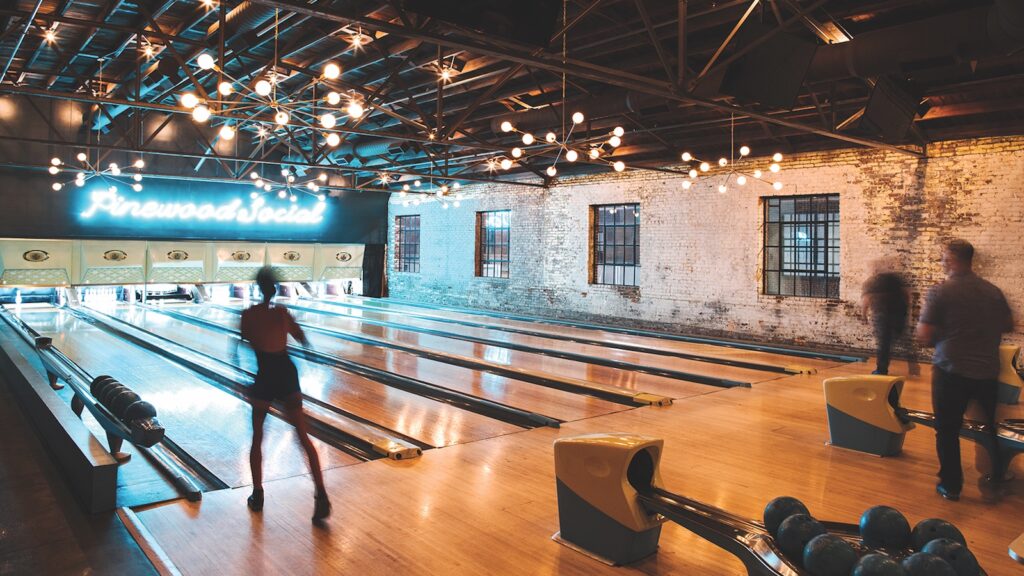 Heave a blade, sip a scotch

The Corner—Ferndale, Mich.
The practice of hurling a hatchet at a tree and praying it sticks is nothing new, but its status as an indoor sport is more recent. Some recreational ax-throwing venues enforce a strict no-alcohol policy; The Corner isn't one of them. Nearly 40 whiskies spanning scotch, bourbon, rye, and more are on offer at the bar just downstairs from Detroit Axe, a competitive ax-throwing arena where $20 per person per hour buys a cutting-edge night out. (Beer and cocktails are permitted in the ax-throwing area but not neat whisky pours.) A game room with over 500 board games offers more sedentary entertainment.

Up Your Game: Throw with consistent force and find your distance to achieve one full rotation, says Ben Potter, director of operations at Detroit Axe. “This is a finesse sport, it's not about power," Potter explains. "Throwing too hard is not only dangerous, but will almost certainly guarantee the ax to not rotate properly.”

The Whiskey Brooklyn—New York, N.Y.
At this former tonic water factory on the north side of Brooklyn's Williamsburg neighborhood, whisky drinkers will discover reasonable prices, a rock 'n' roll vibe, and shuffleboard tables open for free play daily until closing in the wee morning hours. In addition to more than 40 whiskies ranging from $8 to $44 a pour, Boilermakers are just $10 (pickleback optional). Inquire about off-menu whiskies such as Balvenie Caribbean Cask 14 year old for $16 and Highland Park 18 year old for $20, and don't miss The Whiskey Shop next door, a liquor store offering more than 100 whiskies.

Up Your Game: Avoid the common mistake of shooting right down the center of the table, explains Shuffleboard Federation owner and operator John McDermott. “The most important thing, by far, is to learn to shoot from the sides of the table, using the edges of the playing surface as a guide for your fingers.” 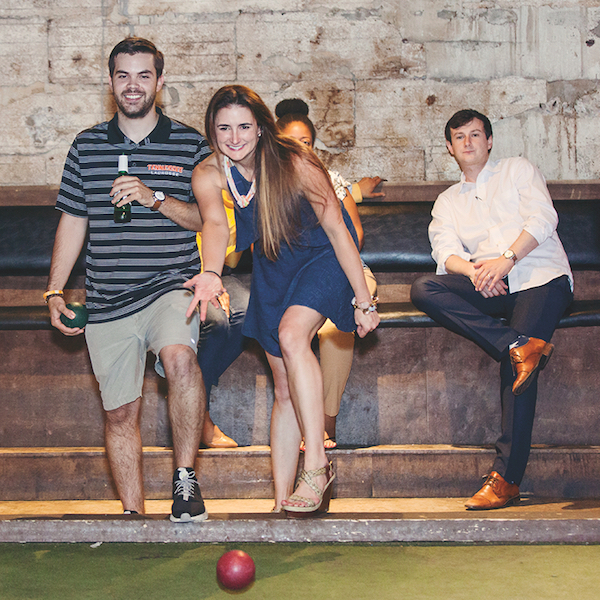 Binge on bocce, burgers, and bourbon

Ormsby's—Atlanta, Ga.
This cozy neighborhood hangout in the city's Westside offers an extensive craft beer selection and more than 50 eclectic whiskies, priced from $6 (Four Roses) to $55 (Johnnie Walker Blue). On Monday nights it plays host to the Atlanta Bocce League, during their four eight-week seasons per year. “It's a great after-work activity to get together with friends for a drink and to hang out,” says league director Chris Walbert. If bocce fails to entice, there's backgammon, darts, pool, and shuffleboard. Feeling peckish? Take the edge off with hot-boiled Cajun-spiced peanuts, or dig into a half-pound burger.

Up Your Game: Slow your roll. “Get as low as possible and let it roll, nice and easy, right to the target. That's really the first thing that a person has to learn,” says Guy De Santis, United States Bocce Federation eastern sector president.

Urban Putt—San Francisco, Calif.
Buy a cheap round at this 14-hole indoor miniature golf course in the heart of the city's Mission District where players pony up just $12. There are more than 40 whiskies on offer, as well as creative cocktails like an Old Fashioned on tap made with Templeton rye; a yerba mate and black tea-infused Tincup whiskey punch; and a Blood and Sand made with Glenmorangie and Bank Note blend, all $12, while a Wild Turkey pickleback is just $8. Drinks tables at each hole allow players to park their libations between birdies.

Up Your Game: Think small movements, explains Bob Detwiler, president of the United States Pro Minigolf Association. Stand with your feet shoulder-width apart, eyes directly over the top of the ball, and take your swing with minimal body movement, “just your arms and shoulders might move a little bit, just so you can tap the ball,” he says.
Distillations Travel Whisky Life zkostro Bars Fall 2019